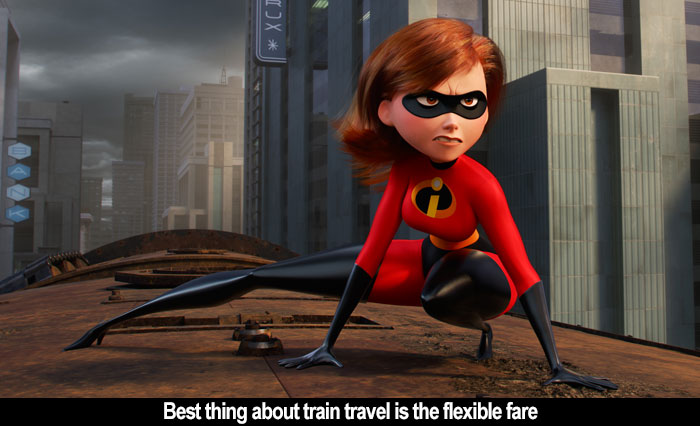 by Walter Chaw Around the midpoint of Brad Bird's fantastic Incredibles 2, Mr. Incredible (voiced by Craig T. Nelson) catches his son Dash (Huck Milner) on Dash's way to the bus and pointedly tucks his homework in his backpack. Yes. This happens. This happens every day of the school-year with my 11-year-old son, who is bright, funny, and kind, and can't for the life of him remember to put his completed homework in his freaking backpack. There are dozens of moments in Incredibles 2 like this. They're small, throwaway character bits that would've taken hours or days to animate and voice correctly, and the real thrill of a movie like this--of any Pixar or Miyazaki when they're clicking--is little moments like these. In Princess Mononoke, for instance, the prince crouches to take a drink from a stream, but before he does so, he loops his bow over his head and under his arm in a completely natural gesture that would be invisible but for its meaningful utility: this guy has spent a lot of time in the woods, drinking from springs and using his bow. It's biography conveyed almost subliminally in under a second. In Incredibles 2, a breathless Elastigirl (Holly Hunter) calls from a hotel room upon getting "reinstated" as a superhero in this universe where being super is illegal, after which she bursts excitedly into the story of her day while stay-at-home dad Mr. Incredible makes the right noises and turns on the television. The film is wise to cultural/gender issues that can arise when the woman is the breadwinner; to teen girls in daughter Violet's (Sarah Vowell) efforts to get a boy to notice her (I have a teen girl, too; it's spot on); and to an American's unique social programming, which says that anyone can be anything through the power of belief and effort. Not for nothing, the villain of the first film is the manifestation of toxic fandom in the schlubby body of a white guy calling/diagnosing himself "Syndrome."

It's an unpopular idea in this country that people are born different. Some have mutations that are favoured, others have mutations that are not. The favoured ones (beauty, intelligence) are often championed as achievement, the unfavoured ones as disability or, in some instances, a murky indication of sin. Ayn Rand's philosophy of objectivism is something ascribed to Bird's films, The Incredibles in particular--mostly, I think, because of the parts that talk about reality being what it is independent of individual aspiration, but partly, perhaps, because of an idea of "selfishness" that Syndrome lays on Mr. Incredible for not wanting to "share" his biological mutation. It's easy to predict, in other words, the kinds of people taking the side of a pathetic fanboy turned murderous, self-made, Randian industrialist. Bird, though, presents heroism as a moral virtue. His heroes don't exploit their gifts for gain and, early in Incredibles 2, raise concerns when billionaire Winston Deavor (Bob Odenkirk) gives them a beautiful house to live in while he lobbies to change anti-superhero legislation. Before having an opportunity to return to fighting crime, our heroes contemplate getting part-time jobs or returning to a life of processing insurance claims.

Anyway, what I'm saying is that I believe Bird's good guys are essentially altruistic, although they do gain identity and satisfaction from that altruism. They're manifestations of welfare, whereas his villains are manifestations of self-aggrandizement. It makes a conversation between Deavor's sister Evelyn (Catherine Keener)--the real brains behind Winston's tech-empire--and Elastigirl on the nature of the doers and the sellers a special fascination. They speak to two separate types of empowerment for women in this culture, and the picture wrestles with them for a while in a similar vein as mother! and Phantom Thread. So many movies revolve around men's struggle with the morality of caring for others--these films, including Incredibles 2, wrestle with the morality, if morality belongs in the conversation, of a woman caring for others. Why does Evelyn support her brother? Why does Elastigirl support her family? How are they expected to?

Incredibles 2, then, is exceptionally thorny and ripe for deconstruction. It's a rich social conversation in the body of a beautifully- directed and conceived action movie. Opening precisely where the first film left off, with a battle beneath the city against the devious Underminer (John Ratzenberger), it demonstrates that the public can be swayed to feel a certain way about something by how the media chooses to cover it. Of course it introduces a new villain, the Screenslaver (Bill Wise), who takes control of a user's mind by way of their ubiquitous screens. And it promotes the idea, suddenly vital and current, that unjust laws deserve only civil disobedience. (There may in fact be nothing more American than protest.) Believing that Elastigirl is the better face for a cultural movement, Winston puts a bodycam on her suit and watches as she stops runaway trains and other urban disasters we suspect from the beginning are the product of the lobbyist's hand. Such is the state of our state that twists like that are expected. The truth, however, is a lot more complex. I love a scene where Elastigirl is seduced not by her new fame, but by a young woman, Void (Sophia Bush), who says that she battled with self-loathing until Elastigirl showed the world a positive example of her mutation--and then, "Yay, me!" Another deceptively insignificant aside but for Void's prominent role in the last half of Incredibles 2 as a tool and minion of a hostile ideology that essentially advocates for a woman's traditional role behind a man.

Elastigirl's story is told in parallel to Mr. Incredible's difficulty adapting to a house-dad role. It's a Mr. Mom situation comedy littered with fine observations that reveal both the character's prejudice and his pride. Incredibles 2 does feel reductive here (if not as reductive as Frozone's (Samuel L. Jackson) never-seen harridan of a wife (Kimberly Adair Clark)), though not without purpose. Once dad puts in the time, like when he learns the "new math" so he can help Dash with his homework, it's rewarding. In a quiet moment, he confesses that he "broke" his daughter and despairs. We all feel like that sometimes. And sometimes it's true. Incredibles 2 is smart and, when it decides to be, exciting. Elastigirl's torque-designed motorcycle is the coolest superhero innovation I've ever seen articulated in a film, and the late homage to Miyazaki's Spirited Away in the bowels of a futuristic hydrofoil is funny and useful. Too much to unpack in one sitting, Incredibles 2 expresses the potential of what mainstream, popular cinema can be. It's observant about our world and offers hope that we can be the best versions of ourselves if we allow ourselves to know, clearly, who we really are as opposed to what we're expected to be. It preaches a doctrine of courage in a world that runs on the exploitation of ignorance of self and fear of the Other. Like Bird's infamous Tomorrowland, its feet occasionally get tangled up in themes and then it spends too much time trying to untangle them, but Incredibles 2 has something to say that's big and messy. While it doesn't have answers, it has possibilities. I wish that weren't so rare now, but it is. I hope it's not too late for us. Incredibles 2 does, too. It's not a perfect film, but it might be an important one.