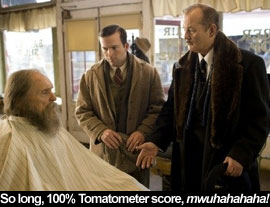 by Walter Chaw Affable, warm, kinda boring, and decidedly minor, Aaron Schneider's Get Low doesn't really do anything wrong so much as it presents as an edgeless, inconsequential, protracted encounter with someone you feel you should be interested in but mostly want to politely usher out the door. It's a conversation killer: a movie about a performance, a particular kind of calling card bespeaking comfort with name actors who might be capable of delivering an awards-season prestige picture for a splinter company interested in a medium-return on a small investment. That's it. At the least, for what it's worth, Get Low operates with a great deal of compassion for its small-town denizens, resisting the easy shot at their provinciality in favour of something more along the lines of a Sling Blade. On that note, this South is neither as ugly nor as impoverished as Billy Bob's.

Robert Duvall delivers the performance-in-question as mad hermit Felix, who, after decades of accumulating rumours and myths about his supposed criminal ferocity, makes his way into town to enlist flailing funeral parlour lackeys Frank (Bill Murray) and Buddy (Lucas Black) in throwing a death-party for him. At said party, Felix hopes the citizenry will gather to tell their tall tales about him and then, as the curtain falls, to deliver the tiny "truth" at the centre of all those lies. Sissy Spacek plays an old flame, Bill Cobbs plays an old friend, and Georgia plays the Old South; most of the time is spent with Frank and Buddy's exacerbation at Felix's crazy, mercurial demands, though a couple of long stretches allow Duvall and Spacek ample room to fill in their characters' voluminous, tortured backstories. The picture works to the degree that it does because the cast is of course brilliant, but there's really no great reward for the sweat of their brows in a story that doesn't matter much and, worse, doesn't offer a lot of wit or wisdom in the telling of it.

Get Low is, in just about every way, fine. It's harmless, and the parts that are potentially not-harmless happen so far back in the film's history as to have little bearing on anything save the lonely life of Felix and his mule--although that, unfotunately, allows for another in Duvall's growing parade of doddering, hand-patting, word-repeating Southern senior performances he started doing some twenty years ago in Rambling Rose. It'd better be accomplished--it's so aged and weather-beaten that it's hard to remember now the vibrant, dangerous Duvall of The Godfather, Apocalypse Now, The Great Santini, or, hell, Tender Mercies; he started embracing his decline a couple of decades before it was necessary. What a shame. Duvall gives Felix some complexity, depth even; a dinner he has with Spacek's sad Mattie Darrow one candlelit evening is haunted in the understated way that only two old pros can deliver. But these moments are few and, lamentably, strung together by some broad reaction shots and a narrative that begins to feel less like a movie than like a valedictory. About an old man clearing the air before his death, it hobbles along like an old person dying. Neither meaningless nor especially meaningful, Get Low is burnished, airless, safe to like, mean to dislike, and altogether too much the audition for better-pimped more of the same. Originally published: July 30, 2010.