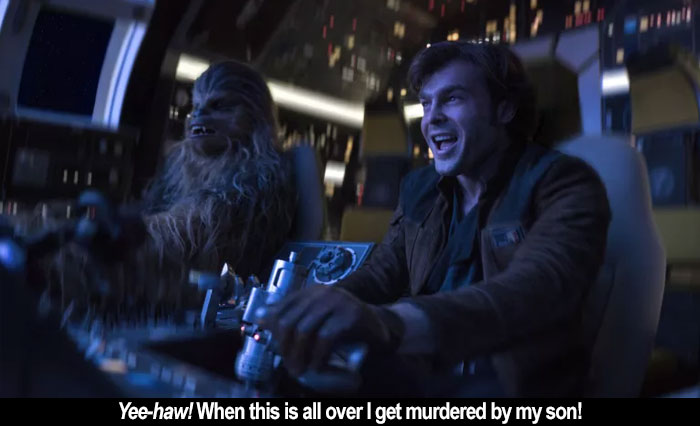 by Walter Chaw SPOILER WARNING IN EFFECT. In Roger Ebert's reviews of the original Star Wars trilogy, he mentions that one of the wonders of this universe is that the droids are thinking, feeling, emotional beings, thus making their torture in Return of the Jedi a visceral thing. In Ron Howard's expediently-extruded Solo: A Star Wars Story (hereafter Solo), a sassy robot named L3-37, voiced by Phoebe Waller-Bridge, is fused into the Millennium Falcon spacecraft after being murdered in the middle of a slave and prisoner rebellion she's incited in another interchangeable industrial backwater. I mention this as a point of interest because L3 is the clumsy mouthpiece for broad progressive beliefs in a shockingly-bad script by father-son duo Lawrence and Jonathan Kasdan. When Lando Calrissian (Donald Glover) asks if there's anything else he can get her as he's leaving a room, she says, "Equal rights?" It's that kind of character. The kind usually workshopped out when the screenwriter--one of them, anyway--isn't the most powerful person in the room. She's Dobby the House Elf from a storyline smartly left out of the film adaptations of Harry Potter, screaming about "droid rights" during a droid Thunderdome sequence done better in everything (but particularly in A.I.), and there mainly I think so that replacement director Howard can slide his brother Clint into a self-satisfied cameo. So this character, liberating droids and releasing slaves and declaring that she's found her calling, is fused by a grieving Lando into his spaceship to spend the next eight or nine movies getting punched and abused by her new white masters whenever she doesn't work right away.

Don't get me wrong: Solo isn't nearly smart enough to be about anything this complicated. The L3 storyline is an accident--careless, likely unplanned, and intended as a compliment to a character whose square creators believe speaks truth to the heart of the contemporary social revolution. It's patronizing, paternal tokenism by people who proclaim their love of Get Out with the same conviction the rich white folks in Get Out declare their support of the Obama presidency. There are scenes early on where our hero Han Solo (Alden Ehrenreich, embarrassingly outmatched), while trying to escape his home planet of Corellia, sees the local Corellian ICE separating parents from their children at some sort of space customs. Scenes, too, where noble Wookiee Chewbacca (Joonas Suotamo), delivered from bondage by bwana that speaks his language, sees others of his kind in shackles and knows what he must do. Then there's the famine planet, whose black residents huddle in abject poverty with their tongues cut out by evil gangster Dryden Vos (Paul Bettany) as Han and Chewie solemnly trudge by in full Indiana Jones and the Temple of Doom reverence to their plight. Look, Han's had it as tough as these lost souls. On Corellia, we learn, he's Ollie Twist to a giant space-anthropoid Fagin, Lady Proxima (voiced by Linda Hunt, because Suzanne Pleshette is dead), trying and failing to get his gaffed, useless girlfriend Qi-ra (Emilia Clarke) off-planet before running into her again as the space concubine to Vos. Painful? It's at least painful. And, I'm sorry but, you know, the very last person I want a lesson from in the legacy of slavery and black poverty is Ron fucking Howard.

What's most painful is Donald Glover, the artist of the moment, literally days removed from his withering statement as alter ego Childish Gambino on the role of African-Americans in American popular culture, "This is America," being asked to do a Billy Dee Williams impersonation as the single biggest piece of shit in the galaxy. The script is so ossified it's clear he's meant to be something like a heavy from The Sting: a smooth sharpie with a literal card up his sleeve who tricks Han out of a pile of money, but tricks himself into an ill-fated mission to the mining planet of Kessel. There, something something happens, something something, and that "Kessel Run" line from Star Wars way back when is checked off the list of fan-pleasing references. It says something that later, when Han wins the Millennium Falcon from Lando in another card game (something spoiled by The Empire Strikes Back some 38 years ago), that even with shots of Lando's empty sleeve and obvious dismay, even after a clear insert where Han hugs Lando to obtain said card, Solo still thinks it necessary for Han to throw said cheat onto the table as an explanation as to why Lando isn't able to cheat again. (Han verbally explains it, too.) This is the way you write a scene when you have absolute faith that your audience is full of idiots. Given some of the reaction to The Last Jedi, that's admittedly not a reach. Lando is also a coward, unfaithful to his word, and apparently was in the process of figuring out how to fuck his robot. Glover is exceptional, mind--it's the writing that lets him down. The timing of "This is America" doesn't seem so random after all.

Then there's rival bandit leader Lexi (Lily Newmark), who is revealed to be a freedom fighter and not a venal opportunist like dashing Beckett (Woody Harrelson), the leader of Han's criminal band. Lexi is guilty of every charge of tokenism mislaid at the foot of Rogue One or Rey; her only character note is that she's a disadvantaged kid leading a bunch of misfit marauders. It's tone deaf, insulting, and entirely non-threatening. Did I mention that after the Oliver Twist prologue, Solo turns into a space western with the world's most boring train robbery, which involves a complete-unto-loathsome squandering of Thandie Newton as robber queen Val and then a thoroughly boring series of going places to meet people. Solo's treatment of women is summarized handily by L3's devolution from Malcolm X to voiceless hardware. They are functional pieces only. They don't exceed their utility. Ditto the movie's treatment of its black characters, who are either the feckless pimp archetype or the (again) literally voiceless faces of poverty and indentured servitude. Take a moment to compare the black characters in this film to Saw Gerrera from Rogue One and his sacrifice to Val's. One step forward, twenty steps back, and all because, in this age of Janelle Monae, Beyoncé, and Childish Gambino, when this project needed a saviour, the one the franchise turned to was 63-year-old Ron Howard, who hasn't made a fresh, fascinating film since Splash in 1984. Solo is 'prequel bad,' and as anyone who really loves this franchise knows, there aren't a lot of things worse.