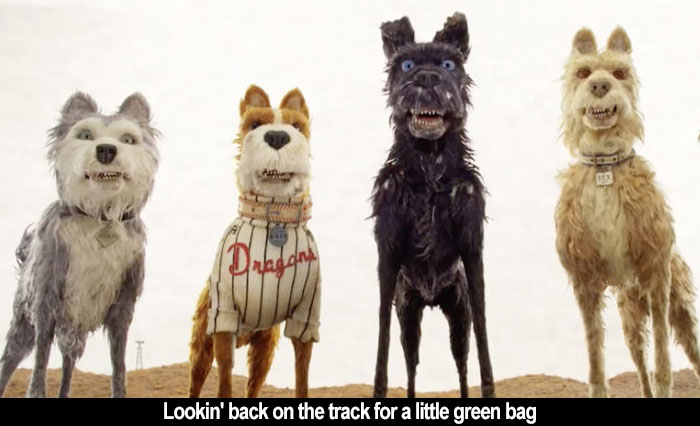 by Walter Chaw There's a Sumo-wrestling match in the middle of Wes Anderson's Isle of Dogs. It doesn't have anything to do with anything else in the movie except that it sets up one of Anderson's whip-pans to another character in attendance, Mayor Kobayashi (Kunichi Nomura). The sequence is uncomfortable because it feels like there's about to be a joke at Sumo's expense--Sumo being, of course, a pastime steeped in ritual and history for the Japanese people. It's like if an American football game appeared for a moment in the middle of a Japanese film: we're about to get pissed on, guys, amiright? But then there's not a joke. Or if there is a joke, it's that Sumo itself is largely inscrutable outside a very specific cultural context and that in the United States, it's those giant foam suits they make members of the crowd wear during halftime of basketball games. Many of the film's depictions of Japanese culture--including a series of plays on the best-known Nihonga paintings, such as Hokusai's "The Great Wave off Kanagawa"--are these punchlines held in pregnant abeyance: we anticipate something off-colour or ill-considered to find that perhaps the only thing happening is a certain blithe, meaningfully meaningless cultural appropriation. It's not "okay," I guess, but saying so lands for me the way that criticism of Sofia Coppola's erasure of a slave narrative from her The Beguiled (or, more to the point, her portrayal of Japan in Lost in Translation) does. I don't think Anderson should have set Isle of Dogs in Japan. And I was never offended that his doing so is the result of his particular brand of twee solipsism. I don't know that anyone like Coppola or Anderson could make anything different. I'm also not Japanese, so my discomfort is complicated by my upbringing in a traditional Chinese household where the Japanese were not held in, shall we say, high esteem.

I have to interrogate a few things. I have to interrogate if my lack of discomfort with Anderson playing in someone else's sandbox has to do with my own lack of identification with the Japanese; and I have to interrogate if my discomfort, what there is of it, is related to my often painfully-won understanding that for most Westerners, there is no substantive difference between me being Chinese and me being Japanese. I felt this most deeply after a screening of Philip Kaufman's Rising Sun in college, when I got the distinct impression that everyone in the theatre wanted to kill me. I got it again after a friend of mine apologized to me for Episode I when, obviously, the Neimoidians were Japanese caricatures (what with their kimonos and naval blockades), not Chinese. Same, same. Isle of Dogs forces that conversation on me every time it does something like name a kid "Atari" or christen a character "Yoko Ono" and have her voiced by Yoko Ono. I can't tell if there's a joke; if there is, I can't tell who the joke's on except that even if the joke's not on me, the joke's eventually on me.

It's not exactly a defense, but an invitation--once we acknowledge that privileged white people should not use other cultures as metaphors or counterpoint--to have a different conversation about what it is about Asian culture that is so vulnerable to casual, largely consequence-free appropriation. Call it the "Cloud Atlas conundrum," in which yellowface is defended as a universalist point well-made, when all the while there's no trace of blackface in the entire production, even though that would have made the point more shockingly and, it goes without saying, effectively. I love Anderson's The Darjeeling Limited even as I recognize how he's using India to play against the essential selfishness of his trio of depressed white men. I love it mainly because it's the last of his films to deal meaningfully with the loss of a father--a topic that was for Anderson a devastating emotional throughline he plumbed with unusual precision and pathos. The parts of Isle of Dogs that work for me are the parts that work through the loss of a dog for a child, and deal with how dogs function as surrogates for missing loved ones, actual or temporary.

A dog, Spots (voiced by Liev Schreiber), is assigned to Mayor Kobayashi's ward, Atari (Koyu Rankin), to be his guardian after the accidental death of Atari's parents. When Spots is exiled following the outbreak of a "Dog Flu" epidemic, Atari crashes a decrepit plane on the titular island in search of him. The dog heroes are centred around a pack of five voiced by Bryan Cranston and various members of Anderson's stock company (Jeff Goldblum, Bob Balaban, Edward Norton, and Bill Murray, of course). Cranston's "Chief" is the rogue, the stray, the one who's never had a family and fancies himself the outsider until Atari's kind ministrations (a bath and a biscuit) unlock the domestication built into his hard-wiring. This, frankly, is the most disturbing thing about Isle of Dogs, as well as the least examined. Ultimately, it's discovered that Kobayashi, a cat-person by birth, is behind the Dog Flu. A revolution, organized by Japanese Parkland Teens (itself led by a Greta Gerwig-voiced white exchange student), reasserts justice in Anderson's Orwellian Megasaki...which is also sort of joke of which the Japanese are the butt. It's hard to say, I think you'll agree.

Scarlett Johansson makes her Wes Anderson debut voicing a dog named Nutmeg, who doesn't see herself as the show dog she was bred to be. She's the love interest for Chief, but in just a couple of strokes, she's painted more vividly than any of the other characters. Johansson is the most fascinating actress working in the United States and the subject, recently, of her own "whitewashing" kerfuffle when cast as Major in the live-action Ghost in the Shell. She's fascinating because she's a classically-beautiful Hollywood movie star who more often than not picks roles that demand a conversation about who she is apart from her physical appearance. Her, Lucy, Under the Skin, Black Widow (spayed prior to joining the Avengers), and, yes, Nutmeg in Isle of Dogs--these all represent an artist with power making the same sort of choices Paul Newman and Warren Beatty made at the height of their respective careers. She wants to talk about how the world treats her deformities: the accident of birth that is her appearance; and the culture that would put her in a box for it. Without Nutmeg, Isle of Dogs doesn't seem to be about anything other than Anderson continuing to disappear into his meticulously-constructed, obsessively-controlled terrariums. They're like the childhood plays of Margot Tenenbaum that patriarch Royal brutally dismisses: children dressed in animal costumes, he says with a shrug and a laugh. Anderson used to play songs in a range I could hear. He hasn't done that in a while. The parts of this one that are interesting have almost nothing to do with him. The picture is oddly topical in pitting teen activism against adult corruption; benefits mightily from Johansson's thematic purity; and inspires controversy and conversation in Anderson's guileless--maybe feckless, you decide--decision to set itself in a Hollywood Orient. But Isle of Dogs really is about nothing much beyond this odd guy and the things he does with his toys. It's too bad, because there's a scene where a little boy and his dogs are walking through the wilderness to The West Coast Pop Art Experimental Band's "I Won't Hurt You" that suggests there's an emotional wallop left in Anderson somewhere, if only he'd stop fucking around for a second.