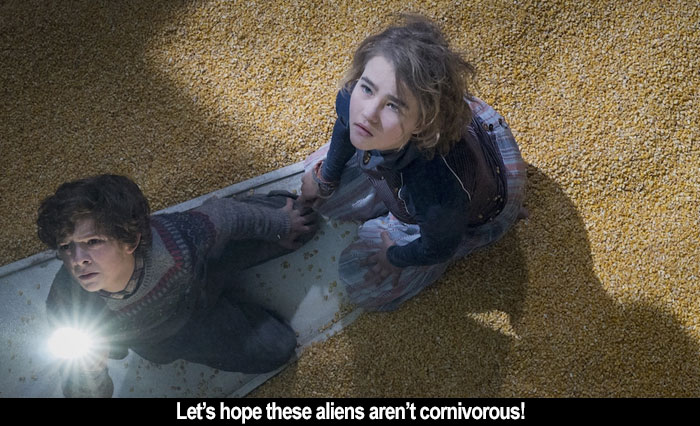 by Walter Chaw John Krasinski's A Quiet Place is exactly the type of inoffensive, about-nothing movie full of beautiful people and empty jumps that is popular for a short while specifically for its yawning blandness. It's a horror film that acts as a security blanket: the world may be over, but aren't they a cute couple? Everything done in this movie has been done before, sometimes better, sometimes worse, meaning essentially that the horror audience has already figured out what the solution is ten minutes in while it takes the idiots in the movie another hour or so. That's too bad. A Quiet Place is so unmoored from anything like subtext or complexity that without a keenly intelligent and efficient script, its seams start to show almost immediately. Yet the instinct is to forgive it for a while because the cast is exceptional; the chemistry between Krasinski's paterfamilias Lee and wife Evelyn (Emily Blunt, Krasinski's real-life wife) is effortless and true, and the kids, Marcus (Noah Jupe) and Regan (Wonderstruck's Millicent Simmonds), are attractive enough that it wouldn't be entirely awesome to see them murdered by space mantises. Well, it would, but, despite an early development, A Quiet Place isn't that kind of movie.

The kind of movie it is, is the kind where monsters arrive on earth and kill almost everyone. They hunt by noise, we learn through old newspapers dressing the post-apocalyptic set, and when little Beau (Cade Woodward) is told through ASL that he can't have a noisy space-shuttle toy during a looting outing, we realize that those old newspapers weren't kidding. Some of the lore behind the scenes of M. Night Shyamalan's Signs revealed that the director, at the peak of his insufferability, had a rider drawn up whereby cast and crew were forbidden to ask what would happen to the film's water-sensitive aliens if it rained--not to mention why an alien species would harvest an animal that is mostly water if said water acted like battery acid to them. It's stupid, right? But Shyamalan was making a greater point about John Irving A Prayer for Owen Meany destiny or some happy horseshit, so there you have it. A Quiet Place is better than Signs because it doesn't have a pompous point to try to disguise its stupidity, but it's worse because it's not as well-made and still stupid. I liked a moment where the extremely-pregnant Evelyn is set to have the worst night of her life in the abandoned farmhouse where the family squats, but that pleasure is considerably diluted by the question of why they're living there, why they haven't soundproofed it, why they didn't, given their predicament, try some contraception, why they haven't set up noise-traps, and what the fuck Lee is doing all the time leaving his desperate-to-be-harvested family stumbling around, knocking shit over and being needlessly defiant.

These aren't smart people. That they've survived this long is magic. There's a scene next to a waterfall where Lee tells Marcus that it's okay to speak normally because the sound of water neutralizes the aliens' super-hearing, and yet this doesn't inspire the family to set up camp close to a waterfall, or use water as a dampening filter. This also doesn't make anyone wonder if the answer to fighting monsters with supernaturally-sensitive hearing is by weaponizing noise. Surely someone would have noticed the things shivering and cowering during loud noises over the few weeks that humanity was ostensibly fighting back with its military. A Quiet Place is the sort of movie that demonstrates all of these solutions and then presents protagonists too dumb to use them to their advantage. Mike Judge would have something to say about that and could have, from this premise, crafted a really interesting piece about how the dumbest people survive through the provenance of their idiot dumb luck, at complete odds with the smarter people who have died trying to test something out. Regan, deaf, has a defective hearing aid that, at one moment, produces feedback in a painful way, causing one of the monsters to freak out and run off. It's a funny gag because it happens really late in the movie and, by then, everyone in the theatre has been wondering for a very long time when that exact thing is going to happen. They laugh not because it's clever, but because: Jesus, look at these assholes. Anyway, A Quiet Place will earn a lot of money and disappear and then Krasinski will assume his final artistic form as Zack Braff while Emily Blunt makes the sequel to Edge of Tomorrow, an alien-invasion movie that is all the smart and efficient this one isn't. And we will be grateful.