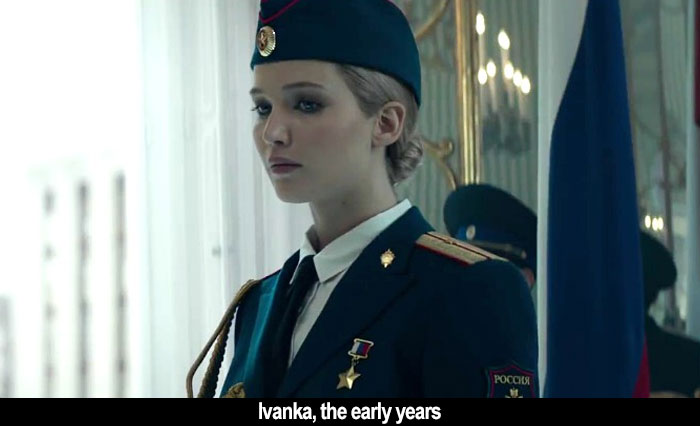 by Walter Chaw "Degenerate," a young woman says during class in self-described Russian Whore School, turning away from a surveillance image in which a middle-aged diplomat is seen snuggling a younger man in a car. "Why do you say that," asks her teacher, a frightening harridan out of a Wertmüller fandango played by Charlotte Rampling (who else?), "is it because he's homosexual?" It is. And here he is, dragged into the classroom by scary Soviet guards. The young woman is brought to the front of the class and instructed to fellate him, since what's "between [her] legs" is obviously of no interest to the degenerate homosexual. For his part, the prisoner grunts like an animal as he wrestles his dick out of his pants and does his best to force the girl's mouth onto it. Let's take a moment to consider that Francis Lawrence's ugly, punishingly violent, ultimately despairing Red Sparrow has characterized this gay guy as a sub-vocal animal interested in getting a hummer from this barely-adult woman--and the Russians as subhuman operators interested in training their youth in the art of fucking for the Motherland. It's not despicable to depict bigotry; it's despicable to be bigoted.

Later, a disgusting Russian section chief based in Budapest, Volontov (Douglas Hodge), informs our "sparrow," Jennifer Lawrence's Dominika (even her name is a knowhatImean knowwhatImean entendre), that he's heard all about her and her ilk, i.e., how they have "special pussies." Red Sparrow aspires to the Libertine surreality of Buñuel's Belle de Jour but succeeds only in replicating that film's sadomasochism and glassy-eyed bourgeois kink. Dominika has her revenge later at a space-age Hungarian strip club when she spreads her legs and tricks Volontov into slapping her across the face...on camera. She tells him that if she shows the tape to their spymaster bosses, he'll lose his job, because apparently the SVR's HR department is down with Whore School, but not okay with slapping in a strip club. This is a signal of empowerment for Dominika--proof, if not proof positive, that Red Sparrow is feminist and woke. In interviews surrounding the picture's release, Jennifer Lawrence declares that its nude and rape (and nude rape) scenes were empowering for her after her iPhone was hacked in 2014 and private pictures were leaked to the public. Alas, the film, however empowering for the actress, is too clumsy by far to honour her agency. Later, Volontov will get his ultimate punishment when another woman in a severe uniform shoots him in the back of the head. That's what you get.

In Belle de Jour, young Catherine Deneuve is married to a doting husband but can only get off as a hooker in a brothel acting out all manner of other men's inappropriate fantasies. Through flashbacks, we're not discouraged from inferring that this is because she was molested as a child. In Red Sparrow, Dominika's rage is fuelled by her dance partner (Sergei Polunin) having broken her leg when she was the prima ballerina of the Bolshoi (really)--something she addresses by golf-clubbing her partner and his paramour while they're fucking in a steam room. She's learned of their dalliance through her skeezy uncle Vanya (Matthias Schoenaerts)--yes, his name is Uncle fucking Vanya--a high-ranking official of the SVR who recruits Dominika to be a sex agent by getting her raped in a hotel room. Later, so that Jennifer fucking Lawrence can learn how to get men to want to have sex with her, he sends her away to Whore School. There's an entire movie in Dominika's young classmate, the one forced to blow a demonic gay guy and then vanished for the rest of the picture. A potentially superior movie about what social conditioning does to women--and to men, too. That's not the movie Dominika's in. After narrowly escaping a shower rape, Dominika, stripped and spreadeagle before her would-be rapist, punishes him with an invitation to fuck her. Rape isn't about sex, it's about power, Red Sparrow helpfully illustrates. It's another blow for womankind.

I thought once or twice about Lizzie Borden's amazing Working Girls, which takes place entirely in a brothel. In Roger Ebert's review of it, he talks about how what a man does with a hooker is essentially "replay old and deep needs that have been in place for years." That's essentially the same lesson they teach at Whore School: everyone has a hole that needs to be filled, figuratively speaking. Once achieved, they're yours for the fleecing. The way Borden portrays this world vs. the way Francis Lawrence portrays it is as easy to categorize as the difference between the way a woman would film another woman in an impossibly-compromised position and the way a man would. The more telling comparison is Belle de Jour, which was likewise helmed by a man. It doesn't exactly try not to objectify women, but its focus is on the irreducible mystery of human interaction and desire. Secretary goes over this ground, too, and does it well. Salo encompasses, unflinchingly, the entire range of human depravity to find, at its bottom, an almost unbearable sense of suture and recognition. So does Martyrs. So do a lot of great, uncomfortable male-directed films that deal with sexual perversion and gendered power structures. Red Sparrow is the other kind of movie: an exploitation flick that victimizes its star for her violations. Deneuve, an actress late of the opinion that sexual harassment ain't no thang, famously complained after Belle du Jour that she had been abused on set and then recognized the film for the masterpiece that it was. Jennifer Lawrence has started with the opposite and indeed the opposite is true: this is her therapy and we're paying to watch it. Red Sparrow is her being victimized again. I'm not surprised she's taking a hiatus.

Once trained, Dominika's assignment is to earn the trust of CIA agent Nate Nash (Joel Edgerton, in another movie "for fans,", I guess), who is doing his best to protect a Russian mole by swimming laps in a Hungarian pool. It's not a good plan. Dominika is the worst spy ever, Nate has read ahead in the script, and there are scenes where we see the partially-flayed body of Dominika's eternally pissed-off roommate (Thekla Reuten), setting up the scene later on when someone else is partially flayed. Red Sparrow is comically gross and begins to feel like what it is: a religious scouring, Britney Spears at the barbershop, a starlet who has worked with David O. Russell a few times coming to terms with the idea that the things you value about yourself are not always the things others value about you. So here's this movie in which Dominika's recovery of her oft-mentioned, highly sought-after vagina from all those who would seek to control it is played out in a series of violent fantasies of domination, torture, and death. For a while, it is almost literally The Hunt for Red October, where the submarine is her sex powers. It's also, alas, a movie in which another woman is butchered and compared to a farm animal, and yet another is killed as the punchline to a short film about a drunk diplomat. (To say nothing of the girl whose jaw is broken while riding cowboy in the raw.) A movie whose hero is subject to brutal beatings and humiliations (Dominika vomits in fear at one point), but whose story ends in the triumphant murder of a perv or two, so there, all is well. But it's not.

Red Sparrow is a curiosity, a film set up like Basic Instinct with spies crippled by a heavy social awareness, grafted onto it like an organ that's not going to take and is starting to stink. It's sadistic, though it wants that sadism to convey a message of empowerment; masochistic, though it wants that masochism to express the same. It's not unlike the Madonna/Willem Dafoe vehicle Body of Evidence, in that it undermines its attempts at becoming an anthem for womanhood by being derisive and ugly towards women constantly. Lest we forget that Jennifer Lawrence is posed in various states of undress and shot in such a way as to explicitly elicit a sexual response in men. It's what she does, after all, the film might rationalize, yet there's plenty of evidence that it's possible to show a woman's sexual power and liberation without indulging in the viewer's rape and bondage fantasies. Patty Jenkins did it with Wonder Woman, of course, but so did a male director, Abel Ferrara, with Ms. 45. Red Sparrow is an example of a dangerous fiction. It's nasty the way that Last House on the Left, Death Weekend, or I Spit on Your Grave are nasty. It's made worse because it doesn't seem like Jennifer Lawrence is in on it. While it's of course bad in any number of more conventional ways (the hilariously poor accents, plot, performance, editing, pacing), Red Sparrow only matters to the extent that it does because it feels like a cry for help that's answered by what seems like another public betrayal. It'll attract a cult--one it genuinely deserves--for all the wrong reasons.