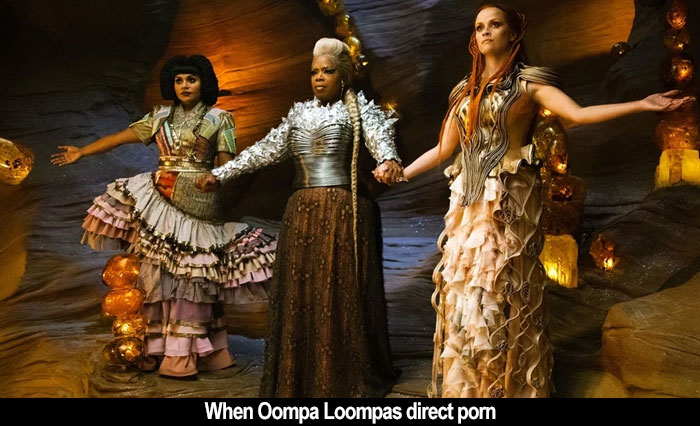 by Walter Chaw In Beyond the Lights, another, much better film featuring Gugu Mbatha-Raw (directed by another woman of colour, Gina Prince-Bythewood), there is a moment where her character decides to un-straighten her hair and own who she is, damn the torpedoes, and it lands like what a revolution feels like. Or, at least, it lands like what a personal epiphany feels like. In Ava DuVernay's A Wrinkle In Time, a little white boy named Calvin (Pan's Levi Miller), with whom heroine Meg (Storm Reid) is creepily smitten, tells her, twice (twice), that he likes her hair, getting an awkward brush off the first time and a shy "thanks" the second. This is what passes for empowerment in a film fixated on empowerment. I think it's probably a mistake to have Meg's sense of self-worth hinge on the approval--at least in this cultural moment--of a white dude. There are fraught politics around a black woman's hair and A Wrinkle In Time uses it as a cruel tease again when there's talk by the evil IT (voiced by David Oyelowo) of Meg straightening her locks before being presented with a "perfect" doppelgänger, free of her nerd glasses, glammed up, hair un-kinked, as one possible outcome for her. It's the key visual metaphor in a film garnering some measure of praise mainly for how it's not for anyone who is "cynical" (or an adult). That, and its visual audacity--which in any other context would be derided for its overreliance on the same, along with the picture's anachronistic amateurishness. Turning Reese Witherspoon into a smug piece of salad is probably not the best use of all those millions of dollars.

The problem is that A Wrinkle In Time is subject to the Linda Woolverton/Jennifer Lee (who co-scripted)/mainstream Disney school of feminism that relies on earnest and terrible over-writing, vapid reaction shots of supportive grins, and creative teams doing their very best to be better than the requirements of scripts so sanitized they come wrapped in those little paper bands. It's the Lisa Simpson or Oprah's Book Club school of storytelling: proselytizing, bullying, exhausting. No one would argue that A Wrinkle in Time's heart isn't in the right place; no one would argue that they can endure more than a few minutes of it. It's an eight-year-old's screed, and goes on for an hour and a half. Would that the film had carried forward the book's central conceit that the true evil in the universe is not black-tentacled low self-esteem, but absolute homogeneous conformity. The trailer-spoiled scene of a suburban cul-de-sac populated by kids bouncing balls in lockstep unison is itself spoiled in the movie when the rage for multicultural representation demands that all the kids be racially diverse rather than lily-white. The multiculturalism neuters the impact of this tableau of stifling uniformity. Buried in here is a version of A Wrinkle In Time that is subversive and dangerous to the White Evangelical American status quo. (Ditto, as it happens, Black Panther.) It's implied that it's hazardous to eat the food in this bad place, and when the suburban gambit fails, the heroes find themselves on a beach beset with tourists, which, you know, maybe we're talking about tourism now, or colonialism and the poverty gap? No, we're not. In the terror to not offend, the film ultimately makes sense only as a vehicle for the empowerment of a specific individual--so specific that the film isn't really for anyone (else). The mind boggles a bit at what DuVernay might have done had she been allowed to write the screenplay, too.

What's left is Meg going into the Shimmer to retrieve her lost dad (Chris Pine), a moony NASA scientist who believes that if your heart is in the right place, you can teleport to a beach. He's been gone for four years, leaving behind Meg, his wife (Mbatha-Raw, an A-lister in the making), and the absolutely insufferable Charles Wallace (Deric McCabe, a 9-year-old actor asked perhaps unfairly to shoulder the load of not just a sprightly savant, but also, eventually, a possessed demon child). Charles Wallace (always first and last name) introduces Meg to a trio of supernatural missus: Mrs. Whatsit (Witherspoon), Who (Mindy Kaling), and Which (Oprah), who promptly tell Meg that she's beautiful, unique, special, smart, worthy, and did we say beautiful (because she is, inside and out)? Forget smart--she's brilliant, and she should embrace her faults as strengths. She's a warrior. This is set against a little montage of Meg wandering her school's hallways, one shot backgrounded by a wall of women authors, the next a portrait of Maya Angelou. That's right, this school was built by O, THE OPRAH MAGAZINE. When Mrs. Which first materializes, she's twenty feet tall. Told she's the wrong size, Oprah bellows, "Who are we to judge what is the right size?" Yes, it's the kind of movie where you feel vaguely scolded for wanting it to be better.

There are already arguments about how A Wrinkle in Time shouldn't be asked to shoulder a sociological message, but doesn't it take on a heavy responsibility in suggesting that the chief Heather/tormentor of our Meg has a body dysmorphic disorder and that our dreamy Prince Charming has an abusive father? Heavy issues are raised and then left to wilt. It becomes clear that what ails the picture are the very things its heroes are tasked to confront. When the material's message of the horrors of ignorance and forced conformity is stripped and replaced by more general Stuart Smalley affirmations, what remains is this movie for very young children and people who want so desperately to like it they'll ignore that right smack in the middle of this mess is a scene lifted directly from Episode I. "Fear leads to anger" indeed, Yoda Winfrey. A Wrinkle in Time is a disaster because it doesn't practice the pride and courage of what it preaches. It's a bad film because it's so afraid to fail. Only at the movies is the phrase "made for kids" a dire warning instead of a guarantee of quality and value.