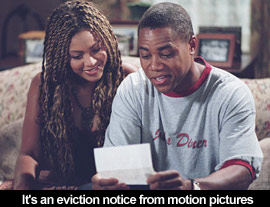 by Walter Chaw It's fair to wonder at some point what it is, exactly, about Cuba Gooding Jr. that appeals the most. Is it the broad mugging? The amazingly insulting material? Or is it the kind of manic energy that proves so enervating to most people too old to be entertained by insulting, mugging clowns? And while The Fighting Temptations isn't quite as bad as Snow Dogs, Boat Trip, or Men of Honor, it's somehow less of a movie than either--a collection of flimsy narrative excuses for musical numbers that manages to suggest that poor southern African-Americans are slavishly devoted to the word of New York advertising executives while confirming that there are some characters so revolting as to indeed be above redemption. In its zeal to graft a few uplift dramas to its gospel-highlights showcase, The Fighting Temptations finds in its protagonist an appalling yaw of moral cess and, worse, a lack entire of much of anything resembling a recognizable humanity. Gooding Jr. is typecast in the part, in other words, and things don't appear to be looking up with the dreaded upcoming disability opera Radio.

Darrin (Gooding Jr.) is a pathological liar and an advertising executive (natch) whose mother was thrown out of a church for singing secular music when he was a child--thus, it's suggested, launching him on a path of self-loathing Michael Jackson-ism. Later, when childhood sweetheart Lilly (Beyoncé Knowles) confides in flashback that she's saving herself for Michael Jackson, the moment isn't nearly as funny as it is deeply disturbing and ironic besides. Branded "harlot" by requisite Christian hypocrite Faye (LaTanya Richardson), Lilly is brought back into the fold when Darrin pretends to be a recording executive in addition to being a prodigal son, interested in resurrecting the local church's choir for a national competition. No surprise that he's doing it for his own financial gain; no surprise again that a series of late revelations will send Darrin back to NYC before he realizes how much he's been changed by these poor black folk; and no surprise once more that Darrin will win Lilly and the hearts and minds of the impressionable simpletons he finally learns to appreciate.

The music is good, so buy the soundtrack. In emulating The Blues Brothers formula of manic interludes between showcase musical numbers, The Fighting Temptations has only forgotten energy, comedy, and invention, grinding to an unpleasant halt whenever Gooding Jr. undergoes another of his rubber-faced epiphanies. A limited film starring a limited actor for a limited audience, the picture is a crowd-pleaser for a tiny crowd: sort of a less-endearing-despite-itself remake of Sister Act that, when it boldly presents a genuinely unsavoury monster--who is that peculiar offspring of modern film and political correctness, the racial caricature that undergoes a transformation before a bevy of noble savages--as its hero, it demonstrates a bottomless disrespect for story that compels and belief in an audience that cares. That this steaming heap isn't even the worst film of the season says a lot about the quality of the films this past summer; and that its title isn't something of an ironic warning is mostly the product of the fact that no one in their right mind was ever tempted in the first place. Originally published: September 19, 2003.