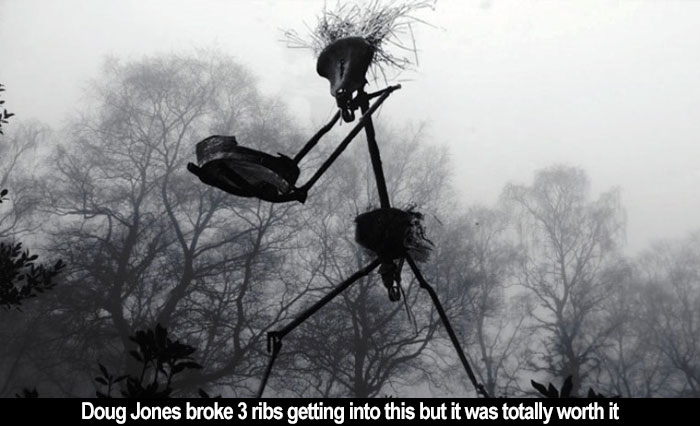 Director of photography Mart Taniel shoots this woodland lyricism in crisp black-and-white. The chiaroscuro he uses is also the primary source of the film's allure. It defines November from beginning to end with thick shadows that fill the recesses of characters' cabins, or streaks of light that spill through windows and the edges of doors. Candles and lamps show up as bright pinpoints illuminating grubby interiors. Bodies of water and the overcast sky likewise become clean white sheets. This high-contrast palette applies a picturesque gloss to even the most prosaic shots. Sometimes it bears symbolic weight: two-thirds of the way through the film, a demonic servant--called a kratt in Estonian myth--speaks through the body of a snowman to tell Hans the story of two Venetian lovers. In the flashback that materializes, the actors (as well as their gondola and the water around it) have all been bleached to the lightest pallor. It sets this scene's dash of costumed romance apart from the rest of the film. Most of the time, actors' faces appear in close-up as fine charcoal gradations. Many in the cast, like the late Arvo Kukumägi, as Liina's father, are elderly veterans of Estonia's film industry, the camera surveying their creased skin and coarse beards. Others are new to the screen. Jette Loona Hermanis plays the baroness, her pristine visage the film's image of aristocratic beauty. (No prior credits, but she's active on Instagram.) The baron is Dieter Laser, an alum of the Human Centipede series and hence the most familiar face here for Anglophone audiences.

With the exception of the stolid Hermanis, this ensemble's work tends towards a groaning, giggling broadness that fits the film's bewitched locale. Sarnet indulges in a macabre sense of humour throughout, especially with the ramshackle kratts, which act as lively visual gags. The magic that governs the village is absurd, with the resident witch advising one client to enchant a clergyman with a lock of hair and another to bake bread from his own feces. In joke after joke, ignorance and greed rise to the fore. November may carry traces of horror in its monsters, its violence, and the accordion-heavy score by Polish composer Jacaszek, yet it's never especially scary. Grotesque comedy is the dominant mode. In terms of tone, it shares a loose kinship with the work of Hungary's Béla Tarr, like his epic satire Sátántangó. That film's more acrid in its storytelling, richer in its camerawork, unfair as a point of direct comparison, but similarly depicts a squalid community isolated in space and time. November's only mildly satirical, and the way it hastily addresses class and religion suggests a deeper treatment in the novel. Instead, it's most effective as a collection of homegrown eccentricities, fragments of a distant world.