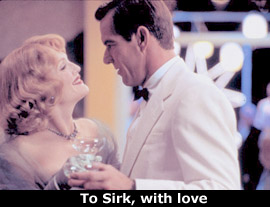 by Walter Chaw Fascinating in its subversion of the conventions of the 1950s melodrama (Elmer Bernstein's swooping score dead-solid in evoking that time and place), the halcyon euphoria of Todd Haynes's Far from Heaven first surprises with its simplicity, then fascinates with its effectiveness. It is essentially a version of Douglas Sirk's All That Heaven Allows (a title that itself speaks wryly about the Hays Code) that brings all of Sirk's seething sexual subtext embarrassed to the front and centre. Taking that further, consider that if the subtext and text are flipped in Far from Heaven, then the artificiality of the film's surfaces becomes the subtext to the sexual dysfunction. Haynes evokes Greek tragedy in the debunking of the fantasy of the golden, Golden Age nuclear family. He has crafted a pitch black and hopeless picture, a torturous psychosexual exercise as played out by the Cleavers or Ozzie & Harriet.

Frank and Cathy Whitaker (Dennis Quaid and Julianne Moore) are the perfect couple: he a television salesman, she a pearls-and-heels-wearing homemaker. When Frank starts spending nights out watching diva films and visiting odd ascot bars hidden at the ends of blind alleys, Cathy strikes up a friendship with black gardener Raymond (Dennis Haysbert)--both pastimes contributing to the Whitaker's auto-immolation and, worse, steady decline in the eyes of their gossip-hungry neighbours. The always-excellent Patricia Clarkson plays Cathy's best friend, Eleanor; Celia Weston turns in an effectively evil turn as town loudmouth Mona.

Operating at the juncture between reality and idealization, Far from Heaven is a meticulously-constructed film that weaves art, music, and a surprising amount of cinematic savvy (note the slow bleaching of colour from the film as it progresses along its downhill slide) into a tapestry rich in saturation. It is carefully modulated and almost cruel in its inevitability, marking time in observing how our culture, then and now, marginalizes gays, blacks, and women before feeding them to the margins of a voracious, invisible caste system.

The brilliance of Far from Heaven is its inexorable slide from bucolic to Byzantine--from the familiar artificiality of the '50s situational melodrama to the also-familiar problems of racism, homophobia, domestic violence, feckless parenting, and adultery. It isn't that the picture is unfamiliar, but that it manages to find new avenues of discourse on old problems. Between Ed Lachman's cinematography and Mark Friedberg's astonishing production design (comparable in excellence to Friedberg's own work on Ang Lee's The Ice Storm), Far from Heaven's dedication to a faithful recreation of Sirk and, by extension Norman Rockwell, cannily locates the latent discomfort of each. A revelation for its simplicity and, to an extent, its obviousness, Haynes's picture is a testament to the craft and the possibility of the medium to provoke thought, to outrage, to edify. If not quite the best film of this, a particularly strong year, Far from Heaven is audacious and brilliant, a high-aspiring, high-concept film that hears the music and tattoos a mean beat. Originally published: October 23, 2002.