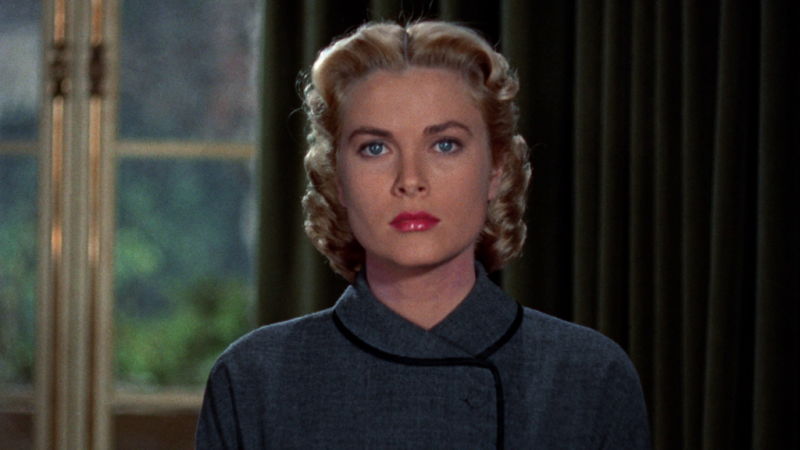 by Walter Chaw I've never seen Dial M for Murder in 3-D, but I can imagine how, in that format, Hitchcock's slow push-ins and dolly-outs would create a habitable space, perhaps a sense of looming menace in his flower vases and teapots and of course the scissors with which poor Margot (Grace Kelly) manages to save herself late one night. In 2-D, Dial M for Murder is literally and figuratively flat: an adaptation of a smash stage play that Hitchcock transplanted without much "opening up"--a dry run for sister film Rear Window, a more polite rounding off of Rope, and what I have to believe was another visual/tonal experiment in a different format. How else to explain its complete airlessness in the middle of the Master's masterpiece period? Maybe it was, as Hitch described it to Truffaut, a piffle, a contract film peeled off to appease Warner Bros.: "Coasting, playing it safe." His own words about it comprise a good chunk of the total scholarship on the picture, but in that brief, three-page section in Truffaut's book-length interview with him, Hitch admits that he hollowed out a pit in the floor of the soundstage, the better to create relief in low-angle shots. In 3-D, the sense of forced intimacy as we as an audience engage eye-level with, body-level with, betwixt our urbane plotters and murderers could be both suffocating and grand. I had a dream once that I attended a screening of this film in 3-D in a large, velvet-lined auditorium. Freudians, take note.

In 2-D, Dial M for Murder is an exposition-heavy picture with about five minutes of "action" insulated on either side by an hour or so of dialogue. Hitchcock scholars and fans will instantly recognize the allure of this material for him--there's truth in his confession of "coasting, playing it safe," because we've seen a lot of this before. Start with anti-hero Tony (Ray Milland), a professional tennis player--like Guy from Strangers on a Train--recently retired and living with the knowledge of his beautiful wife Margot's affair with crime writer Mark (Robert Cummings). Mark's profession lends itself to the très Hitchcock intrusion of morbid conversation in civilized trappings. (Indeed, one occurs late in the game in a way reminiscent of the gambits and feints between quarry and prey in Rope.) As cover for his nefarious plot, Tony, who wants to punish Margot by hiring a low-life to kill her, visits the dog-track--the racing element appearing previously in Notorious, of course, and pointing to a general seediness in the proceedings. It's as close as Hitchcock gets, really, to the grimy venality of noir after Shadow of a Doubt. He dresses Margot in red, as he'll eventually dress Eve in North by Northwest. Margot is a temptress--her colours "cool" as the film progresses--and she's steadily punished for her sexual freedom in exactly the same way that Hitch will punish Tippi Hedren in their two films together. The "knife" in the back, as Raymond Durgnant observed in his one page on the matter, recalls Blackmail; the suspicious wife (eventually) recalls Suspicion; and the photo-plastered walls will resurface in Rear Window (which again showcases Kelly in a series of progressively domestic dresses). There are things to enjoy for the Hitchcock fan, in other words, though not many of them have to do directly with the film.

There is, however, that central sequence when the murderer blackmailed into action by Tony, one Swann (Anthony Dawson)--and should we make something of the bird name (Psycho)? The home invasion (Frenzy)?--throws a knotted nylon around Grace Kelly's perfect neck, and is rewarded with a pair of scissors to the back that he drives in himself with his body weight. It's a horrific moment, coming as it does after what feels like a day of impeccably-delivered blather. There's even a cutaway to a giant thumb manufactured for close-up against a giant telephone because Hitchcock, even when he was "phoning it in," was shoving your face right down against it. There's pleasure, too, in Milland's incredible performance, at once unctuous and suave, wholly at ease in the middle of Cary Grant's reptile and Jimmy Stewart's ruffle. It's one of the great missed opportunities that Milland only worked with Hitchcock this one time, but he gets to do it against Hitchcock regular John Williams as debonair inspector Hubbard. (It was a role that Williams originated on stage and would be destined to play again in a television adaptation.) Kelly, for her part, is perfectly empty. She isn't the trophy to be displayed in Mark Rutland's empty glass case; she's the empty glass case. Notable mainly for its proximity to great films and proof, as if proof were needed, that Hitchcock, no matter how disengaged, was never able to entirely leave his signature off the final product, Dial M for Murder, alas, isn't a lost or hidden gem--at least not in 2-D. There's a lot to mine here, but it gives up its pleasures grudgingly. This one's for the fanatic and the student looking for a term paper that hasn't already been written; file it under "C" for "Chamber Mystery" or "Closed Room Mystery" or "Christie, Agatha." You could look at it for all the ways that Hitch gets in under the Production Code by rewarding the adulteress, or as a movie where the copper is the hero in a rare move against Hitchcock scripture. I want to like it more every time I see it. 3-D next.

THE BLU-RAY DISC
by Bill Chambers Warner's Blu-ray 3D release of Dial M for Murder came out in 2012 but it's taken us this long to acquire the gear to play it. I must confess I'm not entirely sure how to evaluate this disc, since 3-D is an accessory that straddles the artistic and technical divide and isn't easy to judge objectively. There's another caveat: my TV's manufacturer (Sony) has been notoriously bad at implementing 3-D in their newer models, despite being one of the few remaining champions of the format. Sets like the 930D, i.e., mine, are known to generate crosstalk (ghosting), which isn't just illusion-shattering but also headache-inducing. The silver lining is that I have the 55"--crosstalk is said to be much heavier on the 65". Some say the fault lies with Sony's dedication to active-shutter glasses, as crosstalk is less common with passive 3-D. Whatever the case, I fiddled with the 930D's depth adjustment until crosstalk virtually vanished, but the setting I wound up at--"MAX"--seemed to counterintuitively flatten the image, so I dialled it down a bit and weathered minimal crosstalk for more dynamic stereoscopy.

I have to assume this crosstalk was indeed a by-product of my display and not an artifact of the Blu-ray, though the 1.78:1, 1080p transfer does exhibit an egregious amount of ringing (faint haloes around sharp edges) that muddies the 3-D effect of the opening titles, for example. (It's present in the 2-D alternative as well.) As for Dial M for Murder proper, it doesn't exactly lose its staginess in 3-D--but all the foregrounded objects and furnishings are made that much more conspicuous, intensifying Hitchcock's voyeuristic tableaux as lamps and whatnot become tangible obstructions to a clear view of the characters. Comin'-at-ya moments are scarce, the most memorable being Margot's splayed fingers jutting towards the camera as she reaches for a deadly pair of scissors. Occasionally a 3-D effect will seem incidental and even illogical, a by-product of the technology's nascence and the filmmakers' unfamiliarity with it, such as an absurdly mesmerizing (and Hitchcockian) hard shadow that Ray Milland casts on the wall behind him around the 54:54 mark. Some of the most tactile depth occurs in shots that involve rear projection (particularly with the background out of focus), suggesting that longer lenses might have been more ideal for purposes of separating the image into planes than Hitchcock's typical deep-focus photography. Be that as it may, 3-D indeed reinvigorated Dial M for Murder for me, turning a gabby movie into a nominally more absorbing one, confirming Walter's speculations.

The transfer's qualities are identical across the 2-D and 3-D versions. Film grain is amply present and not subtle but the colours have more nuance than they did in standard definition--despite the use of subpar Warnercolor, Margot's red dress looks vivacious--and the wider, HD-native aspect ratio adds a surprising amount of information to the sides while cropping some expendable headroom and legroom. (Compositionally, the Blu-ray presentation feels more cinematic than the fullscreen DVD.) Although 3-D, in my experience, didn't adversely impact brightness (it helps that Sony puts all sorts of compensatory measures in place), the picture is definitely dimmer than the overbright transfers of yore, with improved contrast and dynamic range. Shame about the ringing. Warner offers the feature with its intermission card intact in both 3-D and 2-D, where it comes across as vestigial. Focusing snafus are, for what it's worth, obvious in 2-D in a way they aren't in 3-D. The attendant DTS-HD MA centre-channel audio richly reproduces Dimitri Tiomkin's forgettable score, but the music is considerably louder than the voices--a warning to those who turn this sucker up to hear the dialogue.

Recycled from the 2006 DVD, the only extra apart from the theatrical trailer (3 mins., SD) is Laurent Bouzereau's "Hitchcock and Dial M" (22 mins., SD), featuring talking-head interviews with the same rogue's gallery that had been gathered to spiel on all of Warner's Hitchcock titles back in the day, including, among others, directors Peter Bogdanovich, M. Night Shyamalan, and the late Richard Franklin. Psycho II helmer Franklin offers the best commentary as he dissects the film's quintessentially Hitchcock murder sequence, in which audience sympathies ping-pong between the victim, the killer, and the mastermind behind it all. Oddly, not once is it mentioned that Dial M for Murder was shot in the dual-strip 3-D process, so don't expect any insight into Hitchcock's creative choices as far as its raison d'être is concerned. Perhaps Warner, knowing the DVD would be released "flat," discouraged any mention of 3-D at the time. 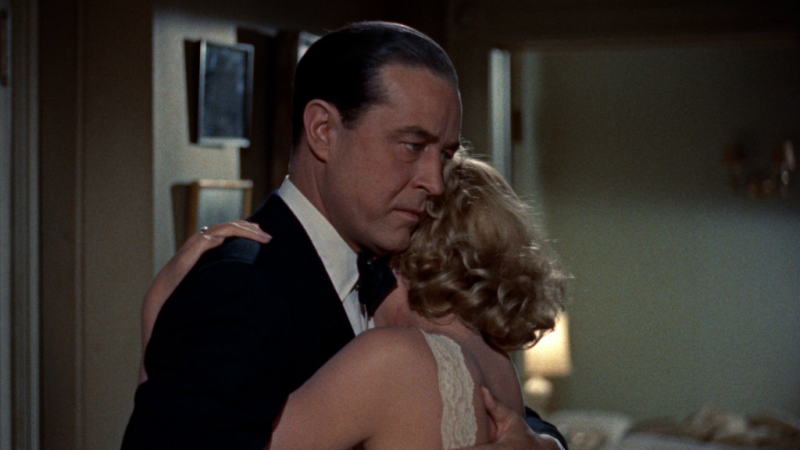