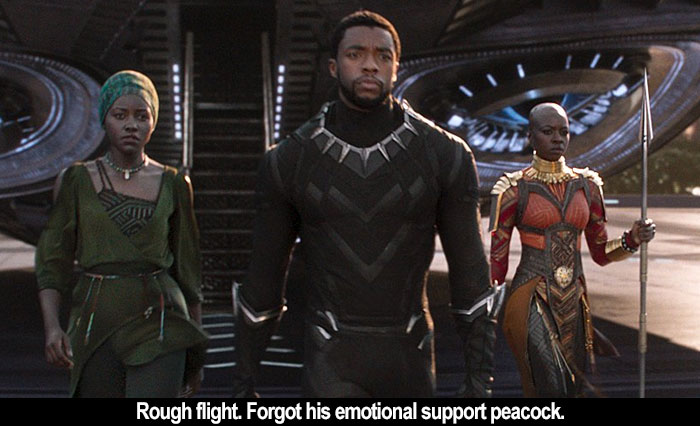 by Walter Chaw There are issues Black Panther raises that I'm not equipped to discuss. I don't understand them. I do understand that its closest analogues are Wonder Woman and Rogue One, in that these are deeply-flawed films that, for particular audiences, hold a near-totemic value as representative artifacts. I can't possibly express the joy and immense satisfaction I felt seeing Asian faces in a Star Wars film. I can't possibly share in the same joy and sense of satisfaction that women got from Wonder Woman and that African-Americans will likely experience with Black Panther. They are all three films that you only really dislike from a position of privilege, and such is the conundrum of our current discourse. I will say that there are a handful of scenes in Black Panther that are as powerful statements of racial outrage as anything I've ever seen in mainstream cinema--that is, in a film that is not otherwise directly about slavery and the African-American experience. During its prologue/creation myth, I gasped at a scene of slaves, chained together, being led onto a slaver's galley. There are moments so bold (if not reductive) that they're genuinely breathtaking in their audacious impoliteness. Bold enough that some of my more conservative peers left the screening soon after a particular pronouncement about the legacy of slavery poisoning race relations into the modern day. At the end of it, a character proclaims they'd rather die than live in chains. It couldn't get balder than that, nor more revolutionary. Yeah, man.

The rest of it is the perfunctory fight sequences that a late-MCU movie demands, plugged into what is otherwise a chatty fairytale about an African civilization so advanced that it's essentially alien in its miraculous technology and mysterious motivations. That's the main issue I'm struggling with: that I don't know if it's advancing the ball to suggest that Africans are extraterrestrial--benevolent, fantastic beings enlisted here to be more metaphor than meat. A speech delivered at the United Nations talking about how the truly wise, in times of division, build bridges rather than barriers is too on the nose by half, punctuated by the type of fawning reaction shots more at home in a Spielberg than in a Ryan Coogler. That's just it, isn't it? That everyone involved in Black Panther is smarter than Black Panther; that the requirements of a broadly-appealing film programmed as part umpteen in an endless series has ground the edges off a little bit. How far away, really, is this movie from Spike Lee's "super-duper magical Negro" condemnation? It even declares explicitly the notion that an African nation should teach the world to put aside their differences and work together as "one tribe." I like the idea a lot. I'm uncomfortable with both the approach and this execution.

It's what makes bad guy Killmonger (Michael B. Jordan) so interesting, however. He's set up against King T'Challa (Chadwick Boseman), née Black Panther, the monarch of a hidden, technologically fantastical kingdom called "Wakanda," hidden behind a hologram in Western Africa. Killmonger is an orphan, raised to be a killer for America's various causes, enraged by the knowledge that Africans in America have suffered so mightily while the god-like rulers in Wakanda lounge away their days in antiquated rituals and general disinterest. They're Milton's God: watching, watching, and doing nothing. Killmonger becomes Milton's Satan in that equation, revealing a body scarred from years of action, ruling in Hell rather than serving in Heaven. If Black Panther is "Paradise Lost", then its conclusion is genuinely ambiguous. The wrong one wins. The fallen one is right--is, in the Romanticist perspective, the positive force in the world. Killmonger was raised in an Oakland slum. His father was killed and he himself left behind by choice in a decision soon-regretted. He wants the crown of Wakanda to make Africans the ruling majority in the world, to shift the balance. The fascination of Black Panther is that this is the embodiment of the American disease--the forever wars waged against dehumanized opponents and the open oppression of minorities and women in ritualistic celebration of our fundamentalist Puritan founders. The neat trick of having all of Wakandan technology based around soil, burials and resurrections, plants, and animals at odds with the anti-Romanticist industrial revolutions of the rest of the world clarifies the filmmakers' intention to frame the Natural against the Machine. I love the insect-mimicking designs of the Wakandan aircraft. And the rhinos, of course.

This raises the question, though, of a certain noble savagery in the portrayal of the Wakandans--the idea that they are more closely connected with nature that idealizes them in a way that Native Americans did not find to be useful. There's also that throwaway moment where rival tribe leader M'Baku (Winston Duke) threatens to eat the children of CIA agent Ross (Martin Freeman) before joking that they're all vegetarians. It plays on the stereotype that African tribesmen are cannibals, I think, but I wonder if the laughter the moment evinces is the right kind. I don't know if I can judge that, but I wasn't sure if I thought it was, you know, funny ha ha. Black Panther walks this line a lot. It's clearly woke, but it's also kind of insular. It's like when I do a Chinese accent that brings down the house; I mean, I get to do that because I'm Chinese, right? But do you get to laugh at it? I'm not sure that M'Baku knows this is a stereotype when he makes the joke--the nature of the joke could be just that he's frightened a small white person--but if so, it plays into the stereotype of the angry, physically-superior black man. It feels more divisive than inclusive. Either way, it's difficult to unpack and scary to try.

I will say that when four African women, in afro-futurist warrior garb, face off against Killmonger, I got a unique and visceral thrill; that when Killmonger crashes the Wakanda throne room and demands someone ask his name, I felt the same sort of frisson I felt when Jim Croce's "I Got a Name" cued up in Django Unchained; and that when T'Challa visits a spirit plane inspired by the cat-world hallucinations of Paul Schrader's Cat People, I almost stood up in the theatre. Black Panther is an interesting film hampered by the requirements of superhero punch-punch-boom-boom. It kills its own momentum, ironically, whenever it stoops to have another tediously-impressive action sequence. It's a smart adaptation of Milton, up to and including a finale that evokes the end of that poem:

Some natural tears they dropt, but wiped them soon;
The world was all before them, where to choose
Their place of rest, and Providence their guide:
They, hand in hand, with wandering steps and slow,
Through Eden took their solitary way.

But at the end of it all, Black Panther presents this unsolvable quandary that there isn't a Wakanda, and ultimately these ideas about afrofuturism are fascinating in a John Henrik Clarke way only. The road ahead is long and vicious; the picture will change the world, probably, when it makes more money than anyone thought it could, but the door only stays open for a while. Get Out is still the gold standard in this new conversation--a moment, precious, already fading. It's the Sweet Sweetback to this film's Shaft. We have a choice. The question is whether the next one through is a bridge or a barrier. Me, I'm betting on Ava DuVernay and Gina Prince-Bythewood to shine a light. Hail to the queens.