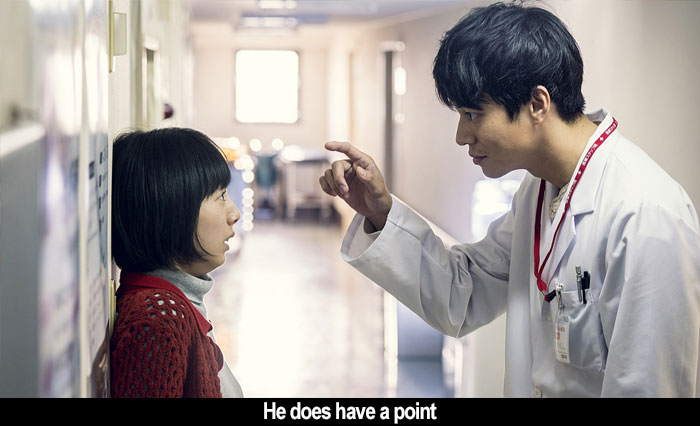 by Angelo Muredda The apocalypse becomes an occasion for everything from learning what makes humans tick to getting to know the distant alien who is your significant other in Kiyoshi Kurosawa's genre-defying twentieth feature Before We Vanish, which might be most firmly characterized as a black comedy if it weren't so puckishly sunny. A return to form of sorts after Creepy and Daguerreotype, neither of which were without their charms but did feel at times like a master's idle wheel-spinning, Before We Vanish works best as a high-concept sampler platter of the wildly divergent tones Kurosawa is uncommonly good at mixing up. That isn't to say the alien-invasion framework and neatly-bifurcated dystopian road movie/romcom structure are purely excuses to see how much mileage Kurosawa can get out of his generic indeterminacy. Still, one would be hard-pressed to deny that half the fun lies in taking the film in as the strange sum of its many seemingly ill-fitting parts.

Where so many alien-invasion thrillers defer the visitors' arrival through a build-up of cryptic radio signals and distorted video feeds, Before We Vanish presents its conceit point blank. Three aliens have arrived on Earth--like the "U.S. Go Home" sign we glimpse behind one of the not-so-green men on an army base early on, we have to assume it's too late to fight them off now that they're here--as scouts for an impending invasion they're all too happy to talk about with anyone who will listen. The aliens take the form of Shinji (Ryuhei Matsuda), who we only really know as the mysteriously changed husband of our heroine, Narumi (Masami Nagasawa); thirty-something single guy Amano (Mahiro Takasugi); and schoolgirl Akira (Yuri Tsunematsu), who set out from their separate origin points to find each other and, Borg-like, pool together what they've learned. The aliens betray a comic disinterest in the flesh sacks they're wearing at the moment, transforming their host bodies into emotionless surveyors who travel around town in search of human guides, the better to collect Earth-dwellers' "collective conceptions," as Amano tells his guide, bemused investigative journalist--and our second identification point--Sakurai (Hiroki Hasegawa). While that may seem a metaphor for learning about the human condition, the visitors are nothing if not literal-minded, announcing "I'll take that" as they gently tap the heads of anyone from whom they want to learn, robbing them of whatever conception our aliens happen to want in the moment. At one point, they reduce the dirtbag head of a design boutique into stomping around the halls throwing paper airplanes after he's been parted from his idea of work.

Despite the bone-dry presentation, there's a lot to unpack here, and Kurosawa revels in the indeterminacy of the conceit and all the different directions in which it allows him to travel. On the one hand, as with that cheeky (and easy) dig at the friendly but implacable face of U.S. imperialism, there's a clear critique of the way hostile foreign powers occupy territory over which they ought to have no sovereign authority, indiscriminately appointing locals as guides and taking what they need without a thought to what they leave behind. Yet Kurosawa also has fun with the screwball potential of the situation--the way it proliferates opportunities for cultural exchange, albeit by motivated actors who, like anyone engaging in cultural appropriation, don't necessarily have the best intentions. He toys with the idea that the aliens are, inasmuch as aloof tourists can be, enchanted by the skills they pick up, just as the human hosts are vaguely interested in the possibility of foregoing their individual identities to become part of some exotic, shared consciousness, even if it sounds a little bit like genocide. "Humans are awesome," Amano deadpans to Sakurai, who presumably sees something of his own profession reflected in this artificially deadened, neutral observer who imposes himself on other people's scenes to extract what he can and report back to the mother ship. Meanwhile, Narumi is clearly tempted by the new and possibly improved Shinji's proposition that she yield what she knows to him so they can reformulate themselves as a couple somewhere in Shinji's head. ("That might be sugar-coating it," he admits, sensing a potential buyer who isn't fully sold.)

It's this last thread concerning Narumi, a frustrated young creative professional who works for a pig and takes care of a man-child, considering her options with or without Shinji 2.0 that inspires the most pathos, resulting in a surprisingly effective romantic comedy about new beginnings and leaps of faith amidst all the doom-laden shenanigans of Sakurai's field trip with the other two aliens. "Shinji was broken," her new partner pleads, so why not rebuild him? It's a decent question, though not without the potential to speed up the arrival of the great big fireball hurtling towards Earth. His ask comes at the end of a formally breathtaking pas de deux in the streets, Kurosawa's camera gracefully following and reorienting itself around the slightly out-of-sync couple as they bob and weave through traffic before finally resting to take in the moment Narumi considers the offer, which tells us as much as we need to know about the original, unseen Shinji. The plot--and, indeed, the fate of the planet--finally hinges on what she decides, and it's to Kurosawa's great credit as a dramatist that we care just as much as if not more about what it means for her than for our race. For all the aliens' efforts to get to the bottom of humanity's collective conception of, say, love, Kurosawa ultimately makes a compelling case for the singularity of the individual being the thing that makes us worth knowing or saving.