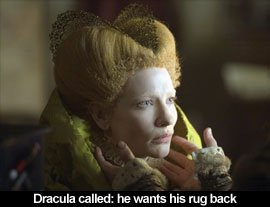 by Walter Chaw I don't mind historical pictures that aren't historically accurate until that historical inaccuracy--like in U-571, for instance--becomes so fucking retarded that it lowers the temperature of the room. Elizabeth: The Golden Age is just that fucking stupid. Should being dumb not be reason enough to avoid this movie, know that it's also unintentionally hilarious, appears to have had its screenplay ghost-written by Bob Dylan, and casts Catholics and Spaniards as Skeksis in some perverse re-imagining of The Dark Crystal as a psychodrama about the cherry-busting beheading of Mary, Queen of Scots (Samantha Morton, dreadfully wasted) and penile conjugation-by-double-proxy of rapscallion Walter Raleigh (Clive Owen) into the hallowed womb (and womb-like cathedral interiors of this England). Cate Blanchett reprises her role from director Shekhar Kapur's first Bollywoodization of British history (he made one other, The Four Feathers, in between) as the Virgin Queen born fully-formed from the school of Arch and Tic. (I wonder if soon there'll be any actresses left who haven't played one Elizabeth or another--seems the distaff "Hamlet" proving ground of our time.) There's a Nostradamus character for whatever goddamned reason, a candlelit bath scene only because it's mandated in sub-BBC pieces of shit like this, and a thinly-veiled CIA spook, Sir Francis Walsingham (Geoffrey Rush), who acts as Elizabeth's chief intelligence officer.

When Elizabeth moans that she's 'given England her heart, did it have to have her soul,' I thought for sure there was something of Dylan's "Don't Think Twice, It's Alright" lament in there--and once someone or other solemnly intoned that they don't need to be told which way the wind blows...well, there goes your "Subterranean Homesick Blues." I understand the cinema of our time to be an echo of the cinema of the early-Seventies and all (there's no other way to make sense of Dylan being cribbed in this fashion for this Harlequin-sponsored edition of Brit history), but did it have to be so all over now, baby blue? Then there's the scene where Elizabeth rides to the front of her army to deliver her rousing Braveheart-cum-Agincourt speech, which plays like a stultifying, unfunny SNL sketch. Yummy Abbie Cornish meanwhile co-stars as Elizabeth's main bitch-in-waiting Bess like a corset and tits in a ribald chamber comedy, and Kapur doesn't appear to have settled on any particular allegory. The suggestion that Elizabeth is a drag Queen made beatific and bulletproof in the slants of lights in a cathedral hall is almost as lame-brained as the moment where she stands, in diaphanous nightgown, to gaze serenely over the tableaux of the Spanish Armada ablaze. My friend chucked me in the ribs and said, "It's like Carrie," and what could I do but agree?

It's a great comparison besides being great snark, because Elizabeth: The Golden Age is an adolescent wet dream where every great screenplay is written by Bob Dylan and shot by the guy who paints the covers of romance novels. Without a lot of effort, the whole thing could be repurposed as a suicide note for a teenage drama queen, a goth Joan of Arc burning in pyres fuelled by hormones and an unbearable, deadly payload of romance. What it is in this form is a grab bag of weak bon mots and badly-camouflaged shots at the United States' government's roster of dirty tricks. "Fear begets fear!" says our regent, imperiously, and though Blanchett doesn't break the fourth wall, the leadenness of the proclamation in an early moment that has no set-up or pay-off is so awkward and proselytizing that she may as well have. Most of the film's running time, though, is devoted to standard romantic movie classics like the parade of ill-matched suitors dating montage (Elizabethan-style, but the same old same old nonetheless); the jealous tantrum; and the firelight scene where someone begs someone else for a smooch. Craig Armstrong and A.R. Rahman provide the worst score of the year used in the worst way--if sledgehammers were musical instruments, they'd sound like this. One highlight: Spanish actor Jordi Mollá, as palsied, mincing, lisping King Philip II of Spain (apparently, there weren't enough Aussies left to play cowboys, Limeys, and Spaniards), is pitched at exactly the right timbre in high camp, to-the-rafters fashion. It's not a good performance, mind, but it's a Daniel Day Lewis-in-Gangs of New York sort of turn: the only way this ship wouldn't have sunk is if everyone had acted like him. Originally published: October 12, 2007.