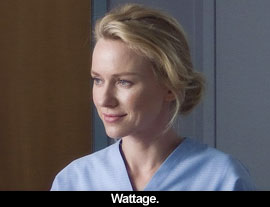 by Walter Chaw As executed by our pre-eminent insect anthropologist, David Cronenberg's Eastern Promises is more fairytale than thriller, one that finds new muse Viggo Mortensen as Nikolai, the rising star of an émigré Russian mob family taken root in the heart of London within the red velvet-lined walls of a restaurant innocuously-/romantically-named "Trans-Siberian." Self-described as "wolfish," this pack is led by grandfatherly Semyon (Armin Mueller-Stahl), who's disappointed with his ineffectual son Kirill (Vincent Cassel) and looking to replace him with a surrogate heir. The rot of that familial discord throws its roots back to ferocious opening minutes that see first a vicious throat-slashing, then a fourteen-year-old, pregnant prostitute haemorrhaging on the floor of a drugstore after she's told that, for Methadone, the pharmacist will need a prescription. Cronenberg's London is a cess seething beneath a veneer of "normalcy"; regarded as a toxic tabernacle in Spider, the city is transformed here into a garish, meticulously theatrical wonderland. The central problem of the picture has a lot to do with the idea that Cronenberg has again taken a pre-existing script and reordered it along distinctly Cronenbergian lines--that what must have read initially as a sociological text on another facet of the immigrant experience (much like screenwriter Steve Knight's Dirty Pretty Things) now plays like one of Cronenberg's investigations into the difficulty of parsing concepts like "normal" and "family" in the crushing crucible of bugs pretending to be human among humans.

In a stunning set-piece in a picture destined to be remembered for a different stunning set-piece, Nikolai, as Russian mob elders interrogate him, allows, "I've been dead since I was fifteen. I've been living in the Zone ever since." The picture can be read as a continuation of Cronenberg's Naked Lunch (a moment in the Trans-Siberian finds a long-haired Slavic crooner playing a tune with an ancient accordion that looks suspiciously like one of that film's insectoid Underwoods) with Nikolai's "Zone" transposed as William Burroughs's lawless, liminal "Interzone," making of London a modern Tangier: a junction for criminal cultures assembling in a bazaar where anything can be had for anything. (At one point, Kirill confides in Nikolai that his father obtained a case of fine, imported brandy for the cost of a ten-year-old girl.) Guilty of crimes against family, Nikolai doesn't kill his wife as Burroughs-surrogate Bill Lee does, but he does bury his parents' memory by declaring his father a coward and his mother a whore. Set against the mafia hive is midwife Anna (Naomi Watts), who delivers the teen-hooker's baby and, suffering from the memory of a miscarriage (the child a product of miscegenation--another echo of Naked Lunch's souk air), hopes to adopt the orphaned tot as her own. Anna is juxtaposed against Semyon in this way, with both parties interested in retrieving something lost in the body of a surrogate. Tying their threads together is the diary of the dead girl, read in a heavily-romanticized, almost self-mocking voiceover narration that declares that her father, a miner, was buried before he was dead in the same Russian soil hungry for the return of all its expatriates.

The sense of displacement in Eastern Promises is pervasive. It's all loneliness and dark destiny, and, accordingly, Peter Suschitzky's cinematography is drenched in rain, sweat, blood, and semen. London is a murky wood filthy with wolves and Anna's Red Riding Hood (or Black Motorcycle Helmet, if you will) is the little girl lost, strayed from the path and made to contend with antagonists "touched by the angels" and devils simultaneously--her precious cargo (a child), the product of darkness, in the end established as the only possibility for any restoration of order. The trouble is Nikolai: Mortensen's performance is one prolonged, carefully-controlled line of tension, Cronenberg's suggestion being that there's really no difference between the Woodsman and just another wolf. (Accordingly, the last shot of the film is as haunted and ambiguous as the patchwork nuclear tableau that closes A History of Violence. "Happily ever after" in Cronenberg's fairyland is weighted with menacing currents.) Mortensen is magnificent and nigh unrecognizable, his otherworldly detachment balancing Cassel's creepy, reptilian energy like a diagram for the complementary halves of manic depression. It's easy to chart the desires of every character in the picture except Nikolai's--he's the interloper, the hero, the villain, Shane finally identified as an emotionless cipher pushed into action by the conventions and expectations of genre. As such, in the end he's as empty as a mirror testing for signs of life in a dying society. The story of his life in Interzone tattooed on his body (and employed as his only armour in one of the most real-feeling fight scenes ever put on film), Nikolai is Cronenberg's perfect avatar: the mortician at cool remove, performing an autopsy on himself (not unlike the brothers Mantle in Dead Ringers) in search of what makes men, men. Originally published: September 26, 2007.