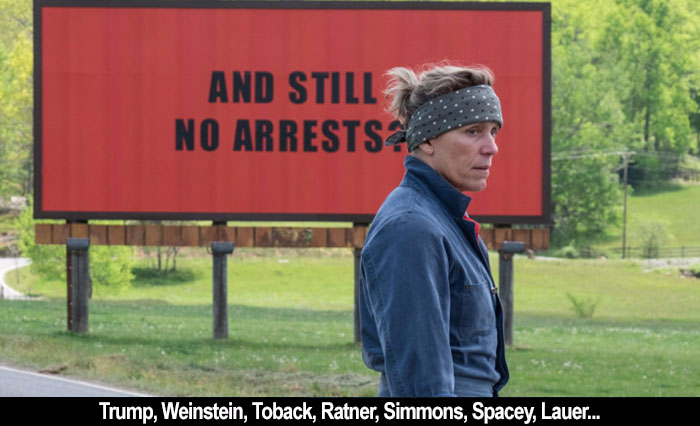 by Walter Chaw There are three young women in Martin McDonagh's Three Billboards outside Ebbing, Missouri (hereafter Three Billboards)--four if you include Abbie Cornish as Woody Harrelson's twenty-years-his-junior wife--and two of them (or three) are absolute fucking idiots and the third was raped while dying and then set on fire with gasoline. As a man who has been told often lately that it's not his place to talk about these things, I'll leave it at that. I didn't think it was funny when the 19-year-old girl (Samantha Weaving) dating the abusive shit-fuck ex-husband (John Hawkes) of our anti-heroine, Mildred (Frances McDormand), is used as an object of derision/tension-breaker, and I didn't think it was funny when secretary Pamela (Kerry Condon) is treated identically before getting punched in the face as her exit from the film. (I'm not mentioning the girl Mildred kicks in the crotch because the trailer spoiled it.) I also have a hard time with a scene where Cornish's Anne berates Mildred for something she knows very well didn't happen (or should know, anyway), which just goes on and on in the McDonagh fashion. Maybe it's that there's this cast of actors here whom I've loved, almost without exception, in everything I've seen them in and now they're suddenly all terrible in exactly the same way. It doesn't take talent to make a bad movie, but it takes a lot of talent to make a movie that's bad like this. Or maybe a lot of arrogance. McDonagh, to his credit, has been doing it since the beginning--a real auteur.

The story has grieving-mom-with-a-zero-"cunt"-policy-in-her-kitchen Mildred leasing three billboards to ask Ebbing police chief Willoughby (Harrelson) why it is that no arrests have been made in the rape and murder of her daughter. Willoughby is a decent enough guy, the twist being that he has cancer. Mildred knows. She doesn't care. Mildred is one of McDonagh's protagonists who does terrible things all the time--is irredeemable essentially, with seemingly no compunction about hurting people--and yet McDonagh is intent on redeeming her anyhow. This is a statement about how the world is a disgusting sty populated by burnt-up, hollowed-out husks of human beings. It is proof of "behavioural sink," see: an intellectual's object examination of the disruption caused by the extreme balkanization of our current state. Well, at least from this Irish playwright's razored perspective of the American heartland, it is. The problem is that Mildred is dangerous. The explanation is that she's grief-stricken; the rationale appears to be that the only way to find justice in this world is to get mad, break free, become sociopathic. There's a tease towards Memento at the end that suggests the movie Three Billboards could have been--and then one realizes that Memento was made seventeen years ago and still had more to say about behavioural sink than this artifact from the post-apocalypse. Trump-era films are supposed to do more than warn about Trump voters. We know already. The problem with art that tries to be contemporary is that it's stuck in the time of its literal creation. It's like the special-effects spectacle that has nothing in its heart. McDonagh makes ideological Willows over and over again.

Mildred's billboards make Willoughby angry, of course, but not as angry as his deputy, Dixon (Sam Rockwell). Dixon is maybe named after Jefferson Dixon, who, together with his boss Charles Mason, drew the Mason-Dixon line on behalf of the British Royal Society. Anyway, both the line and the character are the product of European demarcators, for what it's worth. Dixon represents the prototypical Trump guy: hateful, stupid, wilfully ignorant, and funny but for all the violence he levels at everyone around him. He beats the ever-loving hell out of Red (Caleb Landry Jones), who is gay, I think, and is renting the billboards out to Mildred. Dixon's also the one who punches Red's silly secretary Pamela in the face as an afterthought. When this happened in Suicide Squad, most of the same people putting garlands at Three Billboards' feet dusted off their torches after coming to. Consider how Three Billboards handles the question of moral ambiguity in contrast to the current remake of Murder on the Orient Express (directed by another European, Kenneth Branagh): how McDonagh greets it with the kind of smug nihilism reserved for character-redemption arcs vs. how Branagh treats it with immense sadness at the possibility that there's no such thing as redemption, nor was there ever.

Dixon is a racist who tortures black prisoners. He hates women, lives with his mother (Sandy Martin), and finds himself incapable of forming witty ripostes to the jabs that come his way. He visits great violence on the innocent. So does Mildred. But deep down, they're really good people. We know this about Mildred because she has a dead daughter. We know this about Dixon because Willoughby's voiceover tells us so. McDonagh's work is that unicorn that is simultaneously over- and under-written. The idea that a decent person like Willoughby would conscience a dangerous, sadistic ignoramus like Dixon is the kind of liberal bullshit liberals are accused of all the time. It doesn't make Willoughby a good person, it makes him a straight man to the straw man. There's a scene late in the picture where a disgraced but recuperating Dixon, having read a letter telling him to "love," overhears some shocking information beneath a "Live Bait" sign. Don't take the hook.

Towards the end, Mildred consents to a date with James (Peter Dinklage), a car salesman who has provided Mildred with an alibi for arson and attempted murder for no other reason than that James is lonesome and has a thing for her. McDonagh likes to make "midget" jokes. He uses the term a lot. It feels like Tarantino using the "n" word. It feels like he feels like he's getting away with something. "Cunt," too. Edgy, non? At least in America. Anyway, Mildred is being her usual dour, contemptuous self when she tells James, following a cruel exchange with Charlie in which they take turns treating James as subhuman, that she wants a raincheck for their date. "Why would I wanna do this another time?" he asks. "You've been embarrassed to be here ever since we arrived." Then he says this, which Dinklage delivers beautifully:

Forced you? I asked you on a date. Wow. Well, y'know, I know I ain't much of a catch, okay? I know I'm a dwarf who sells used cars and has a drinking problem, I know that. But who the hell are you, man? You're that billboard lady who never ever smiles, who never has a good word to say about anybody, and who, in the evening times, sets fucking fire to police stations. And I'm the one who's not the catch… I didn't have to come and hold your ladder.

Note, though, that the pathos here comes from Dinklage (Dinklage, who I think McDonagh has wanted to work with ever since he started making midget jokes in In Bruges), as even in the midst of this lovely declaration of pain and self, James suggests a woman should smile. This isn't ambiguity written into the character, it's ventriloquism from a guy who likes to build straw men and then likes to make speeches. McDonagh is Aaron Sorkin but pandering in provocation. The monologue would've made more of an impact, in other words, were it not sandwiched between a scene of Mildred mocking Charlie's girlfriend Penelope for using the word "beget" and McDonagh mocking Penelope by having her say that she learned it from a bookmark she was using in a book she was reading about polio or polo--whichever one involves horses. To make it all right, Mildred warns Charlie to be nice to Penelope. If he does, he'll be the first one.

Three Billboards assumes the aspect of world-weary malcontent but is really just a patronizing scold. It shouts nasty shit in a crowd, draws a reaction, and then brings it down with a but seriously, what is it with those beaners? It knows enough to be able to act awful, yet not enough to obscure that it's genuinely awful. It chases its own MacGuffin. It makes the point that there's no salvation but offers salvation; these people who have injured others are forgiven not because there's a moral reset button, but because the movie's almost over and movies that are actually down about our species (like mother!, or The Killing of a Sacred Deer) don't tend to win awards and gather support. McDonagh uses Dinklage as a metaphor even when he has him proclaim his humanity; he says that people can be saved even when there 's no mechanism for salvation nor evidence that these shticky characters desire it or have earned it; he writes violent smut and hopes you'll believe he's merely commenting on it. All of Billy Wilder's films were assholes, too, but they were populated by people who deserved to hold their aspirations. When you have someone talk to a deer and then burst into tears, you're either Douglas Sirk and a genius, or you're the dick who uses drop-needle opera cues to show how afraid you are that someone is going to figure out the difference. Three Billboards is a nasty bit of work, more telling by the fact of its existence than by its execution. People will connect to it. That makes me feel pretty lonesome and afraid out there among the English.