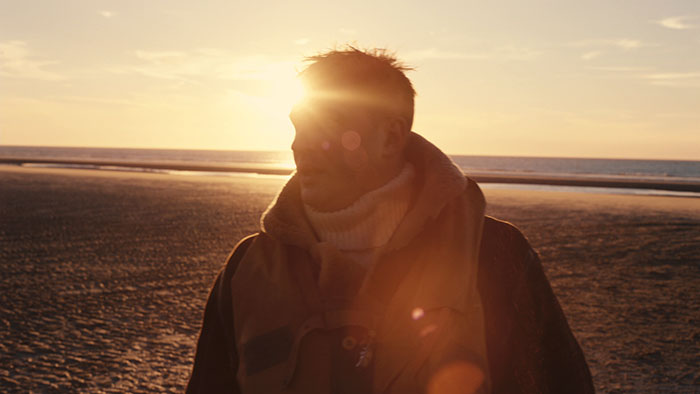 by Walter Chaw The bits of Christopher Nolan's Dunkirk that are good are so good. The bits of it that are bad are just awful. I'm a Nolan fan. The only films of his I don't like are his remake of Insomnia and his much-lauded Inception, which is so emptily pretentious that it creates a vortex in the middle of the room and sucks the air right out of it. Though a lot of people accused Interstellar of doing that, there's a real heart in there. It's a bad science-fiction movie, but it's a great movie about fathers and daughters. (Not unlike Contact.) In other words, I have defended Nolan against charges of his being all of empty spectacle. I think his brand of operatic proselytizing works exactly right for the Batman character, who does the same and has the same sense of self-worth and wounded entitlement. I think The Prestige is a nasty, ugly, fantastic piece of genre fiction. Dunkirk is like a cornball version of Memento; that is, a Memento that is neither a noir nor a down film but just as much of an endurance test. Also, it's puffed-up full of itself, and it's about one of the most well-told tales of British pluck in WWII. It's going to win many awards because the people who give awards generally reward movies like this. It's like an adaptation of a Silver Age Amazing War Tales comic book.

The really good is the timeline that covers one run by a Spitfire pilot (Tom Hardy), who heroically protects a few ships evacuating British soldiers from the titular beach, German forces massing on the horizon but not rushing in because, of all the things to defeat Hitler, a big one was a lot of bureaucracy. There's a real sense of dislocation as he tries to protect his mates, track down the bad guys, and get to where he needs to be before his side is picked off like very polite British soldiers standing in long lines on a beach, waiting for evacuation. I like how he sees the result of things and then looks around to determine who could have done it. I like that much of what happens to him happens without warning and out of nowhere. The best is how Nolan shoots everything with a sense of relative geography. You can see where the bad guys are in relation to the good guys. There are stakes established and moments where it truly feels like you're in the cockpit with him. It's a wonderful sequence that is, unfortunately, intercut with two others. One follows a young British soldier named, wait for it, Tommy (Fionn Whitehead), as he tries to find safe passage across the Channel. The other follows professional decent person Dawson (Mark Rylance) and his son Peter (Tom Glynn-Carney), who decide for reasons easy to ken to take their little schooner across to rescue His Majesty's finest. In a film that's curiously truncated-feeling (particularly for a filmmaker noted for his bloat), Nolan nonetheless makes time for a surrogate son/grieving father subplot. Along with two blind-guy moments because, you know, in some ways blind people see better than you and me.

That's the problem. Dunkirk is a crowd-pleasing tearjerker that presents itself like the cure for cancer and unfolds like a claustrophobic horror movie. There's a lot of drowning and near-drowning, strafe-attacks by screaming Luftwaffe, U-boat attacks, and an oppressive Hans Zimmer score that hammers on the tension for protracted periods. Imagine Jaws playing the first two notes of the Jaws theme for the entire film and then the shark doesn't show up. There's a long, virtuoso scene in the hull of a beached trawler that the Germans start taking target practice on, as well as another where a downed Spitfire pilot fires a flare into his cockpit and then stands back to watch it burn as the Hun close in on all sides. The three storylines converge just in time for the uplifting part where the concerned Commander (Kenneth Branagh) squints into his binoculars to see all those brave British sailors coming to save the world. Churchill, it seems, hopes to rescue about 40,000 or so of the 400,000 stranded army regulars, but the Limeys, damnit, ultimately saved more than 300,000 of them. It's a great story. Did I mention the part where a boy's accidental death is told to a newspaper and immortalized by the same, as a heroic act after the fact? It's either a comment on the unreliability of the press, the role that propaganda plays in wartime morale, or just another thing trying to make you cry for some reason in a film where 100,000 or so men die, mostly off-screen.

Nolan has things he does and he does them in each of his films. While this makes him an auteur by the strict definition of the term, I have a hard time celebrating too hard the tics of a filmmaker who has as his main selling point to eternity that you need to see his movies a few times before they stop being frustrating. That sounds suspiciously like the kind of thing said by people who are afraid to say they were confused by something that's supposed to be smart but is actually just confusing. Dunkirk is, at the least, the movie that best exemplifies that which Nolan does well (the iconic tableaux, the operatic gesture) and that which most irritates about his work (the sense that all that awe and sleight of hand is disguising nothing much at all). The opening sequence is haunting and visually evocative, with pamphlets falling from the sky and a band of brothers running from the forever-unseen enemy; there's a wondrously- framed and shot sequence on the beach where our Tommy cringes as a row of bombs obliterates his mates, one by one, from far to near. The picture is a series of vignettes with scenes of surpassing beauty that put you through a miserable time to tell you that war is hell and the British are tough. (Also, if you don't see it in 70mm IMAX, you are a philistine who hates movies.) Mostly, it reminds me of Quentin Tarantino's The Hateful Eight: a film by a filmmaker I like that's finally guilty of everything the filmmaker had been previously accused. It makes me question my affection for the rest of his stuff. Dunkirk is going to be raised up as Nolan's masterpiece because it probably is his masterpiece. That doesn't mean it's good. Originally published: July 21, 2017.

THE BLU-RAY DISC
Dunkirk comes to Blu-ray from Warner in a two-disc set that dedicates the film and a making-of to separate platters. The latter, structurally mimicking Dunkirk with sections devoted to "Land," "Sea," and "Air," is divided into sixteen individual segments that together run longer than the movie proper. (110 minutes, to be precise.) Opening with a solemn recap of the events at Dunkirk, the piece frames writer-director Christopher Nolan's commitment to restaging them with visceral integrity as a noble attempt to honour history, yet what comes across is that a British kid's found the perfect vehicle to play war on a grand scale. (Rarely has the Orson Welles quote "a movie in production is the greatest train set a boy could ever have" felt so fitting.) There's a lot of promising material here among the talking heads and B-roll (such as the soundtrack's use of the Shepard tone to urge the movie forward), laid out in unsatisfyingly superficial terms, presumably so as not to alienate general audiences, who are of course famous for watching feature-length documentaries exclusive to physical media. At one point, Nolan, who probably wears a scarf and longcoat in the shower, says he has no interest in "being pedantic"--although he's referring specifically to historical accuracy, it rings hollow regardless since we've just watched a featurette on rebuilding "the mole" (the concrete pier that served as a makeshift dock during the evacuation of Dunkirk) from scratch, on the same site where it once stood. It's a real "physician, heal thyself" moment; and because this thing was produced in-house at Warners, where they love Nolan almost as much as they love Steve Mnuchin, the Jurassic Park question of whether erecting a bridge or asking actors to copilot a Spitfire was both possible and necessary is never invoked. I did like the bit where they generated extras en masse out of cardboard (now that's impressive), and Harry Styles is just so dreamy in his interview clips.

Rounding out the second disc is a 2-minute ode to the U.S. Coast Guard, who let the production utilize their facilities in Palos Verdes because they responded to the script's themes of valour and bravery. From the tone of the piece, I gather this is sort of unprecedented. As for Dunkirk itself, it looks good and sounds spectacular. (I'd hoped to audit the 4K UHD release, but this is the hand we have been dealt.) The aspect ratio switches, per the film's alternating use of IMAX and Panavision 65mm, between HD-native 1.78:1 and 2.20:1, though qualitatively the presentation is surprisingly seamless, certainly more consistent than it ever was on Nolan's Batman films (which filled in the IMAX gaps with considerably inferior 35mm). A truer replication of the IMAX version would pillarbox the IMAX footage to 1.43:1, but then this would beg the question of whether to maintain vertical uniformity by pillarboxing the entire thing: if so, the 2.20:1 material would wind up windowboxed, making poor use of one's 16x9 display; if not, the aspect-ratio toggling would become even more obvious and hardly convey the awe that IMAX inspires when it fills in the top and bottom of the frame. Anyway, the image is virtually free of grain throughout (owing to the hi-res stocks) and gorgeously tactile, but I did find it dimmer than expected, which can make the picture's blue patina feel a little heavy-handed. The attendant 5.1 DTS-HD MA track is awesomely loud and intense; after the early string of explosions on the beach, I checked for bruising on my solar plexus. Despite not being object-based, the mix conveys an astounding you-are-there transparency. Voices are sometimes slightly harsh and muffled in that Christopher Nolan way, but that's why God invented subtitles: to foil the Christopher Nolans of the world. "I don't agree with the idea that you can only achieve clarity through dialogue," he once said. Someday he should ask himself why he doesn't want people to hear what he wrote. 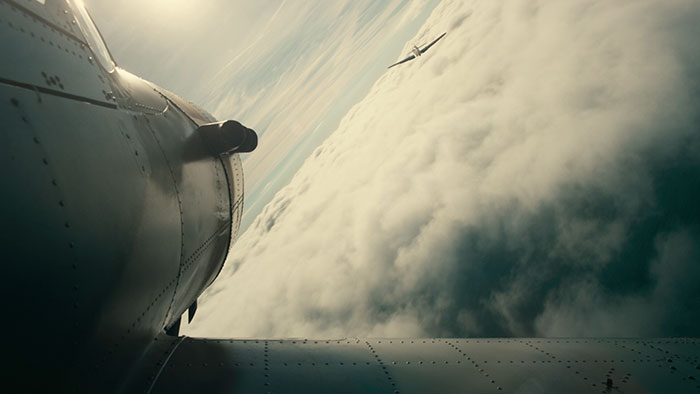