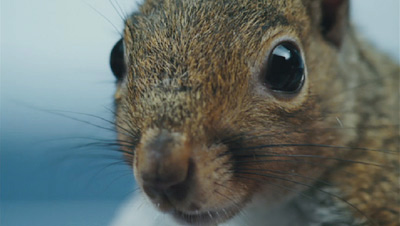 by Walter Chaw The first hour is so obsessively faithful to the Roald Dahl source material that I was lulled into believing that Tim Burton's Charlie and the Chocolate Factory was going to be a classic, a magnificent return to form for the dark fantasist who, once upon a time, denied Edward Scissorhands a happy ending, and let the Headless Horseman come back for the little kid under the floorboards. The set design of little Charlie's hovel on the edge of an industrial town is stunning--a throwback to the German Expressionism of Burton's Vincent and, in its canted walls, the best of its kind since The Cabinet of Dr. Caligari. Thus the tragedy and the irony of Charlie and the Chocolate Factory's return to earth is that its ultimate mediocrity has a lot to do with the addition of a worthless backstory that draws it closer to Burton's auteur tendencies and away from Dahl's cruel, austere master plots. Burton's loner-punk heroes (Edward Scissorhands, Bruce Wayne, Pee-Wee, Ichabod Crane, Ed Wood), see, live alone or in a metaphor for isolation, divorced from their horror-legend father figures (Vincent Price, Martin Landau as Bela Lugosi, now Christopher Lee) and largely failing to hide their disfigurements while struggling to achieve a semblance of "ordinariness" in their familial relationships. (Even the demon Beetlejuice has a moment where he throws his arms around his victims and yells, "C'mon, we're simpatico here!") At their core, Burton's films are by and large hopeful--bittersweet or piquant, they're consistently portraits of misfits with dreams. But until Big Fish and Charlie and the Chocolate Factory, they hadn't been trite or, perish the thought, fearful.

Charlie Bucket (Freddie Highmore) lives in a one-room shack with his mother (Helena Bonham Carter), father (Noah Taylor), and four grandparents. Once a year, for his birthday, he gets a chocolate bar manufactured up the street at the mysterious Willy Wonka's mysterious factory. (Knowing that Dahl was British and then considering what a "willy" is in the British coarse vernacular... Has anyone ever taken a close look at what the character's name actually means?) His annual treat is nice, but it makes Charlie a longshot to winning one of five Golden Tickets--passes to visit said factory, closed to the public for years and years--Wonka has hidden in random packs of his sweets. Spoiling little, I hope, Charlie does indeed find one of the prized tickets and, with Grandpa Joe (David Kelly) in tow, takes a daylong tour of the titular factory on the arm of certifiable weirdo Willy Wonka (Johnny Depp, suggesting a cross between Marilyn Manson and a Teletubby). The other winners are gum-chewing maniac Violet Beauregarde (AnnaSophia Robb), spoiled princess Veruca Salt (Julia Winter), Bavarian glutton Augustus Gloop (Philip Wiegratz), and vile consumer of mass media Mike Teavee (Jordan Fry)--each of them representative in some way of the ills of their cultures, each of them obnoxious beyond objective measure, and each of them doomed to become an object lesson for the increasingly discomfited kids in the audience.

Burton doesn't pull a lot of punches in their punishment, making of the inner grotesques literal grotesques in the Dahl mode and scoring their individual just desserts with an Oompa Loompa (all of them played by Deep Roy) song done in a different style (the best a tribute to Three Degrees' "When Will I See You Again?", the worst a toss-up between the Devo bit, the Esther Williams ape, or the hair band send-up.) Wickedness visited on wicked children is good--where Charlie and the Chocolate Factory goes wrong is in giving Wonka a childhood trial to explain away his dysfunctions. His power comes from being an iconic figure of absolute unrest, not a screwed-up Freudian mess like you and me. Almost from the moment the kids reach the factory, in fact, the film loses its Industrial Revolution grunge and acquires a plastic patina of thin freakshow-ism that, at times, seems perverse merely for the sake of it. Flashbacks are commented upon with an unbecoming self-awareness (must all films now be aware of themselves?), and Depp's performance, while delightful, exists in a vacuum by itself. Worst is an epilogue that tragically metastasizes from Dahl to Dickens, revealing Burton to be either a secret softie or a covert panderer to the popular taste. (This from the guy who once broke from Disney after directing a short film about an undead wiener dog starring Shelley Duvall.) Charlie and the Chocolate Factory is, at the very least, a marked improvement on Gene Wilder's inexplicably lionized Willy Wonka and the Chocolate Factory (the one with the chicken beheading, the nauseating Wilder bathos, and the scene where Charlie and Grandpa Joe do their best to burp and fart their way out of our sympathies). It's okay to love it, I guess, but the update is a better film. For what it's worth. Originally published: July 15, 2005.

THE DVD
by Bill Chambers Warner issues Charlie and the Chocolate Factory on DVD in competing widescreen, fullscreen, and widescreen Two-Disc Special editions. Once again the bare-bones widescreen release is not simply a pull of the first disc from the 2-disc set, but its own uniquely-configured pressing. To start with, the 1.77:1 anamorphic widescreen transfer is sensational; some may fault it for a lack of fine detail, particularly once the story takes up permanent residence inside the titular factory, but the film's synthetic, almost textureless finish was clearly an aesthetic choice. What surprised the hell out of me was the Dolby Digital 5.1 EX track--Charlie and the Chocolate Factory is aggressively loud here in a way I imagined it sounding in IMAX. (My theatrical screening took place at one of AMC's shoebox theatres.) Danny Elfman's score and songs are given a wide berth and sequences like the squirrel attack make dizzying use of the discrete channels. Extras include a 7-minute how-they-did-it featurette on "Becoming Oompa-Loompa," an interactive "Oompa-Loompa Dance" tutorial, and Charlie and the Chocolate Factory's theatrical trailer. Previews for the film's soundtrack and Tim Burton's Corpse Bride precede the main menu, which features footage of Deep Roy specially created for the DVD. Originally published: November 9, 2005.