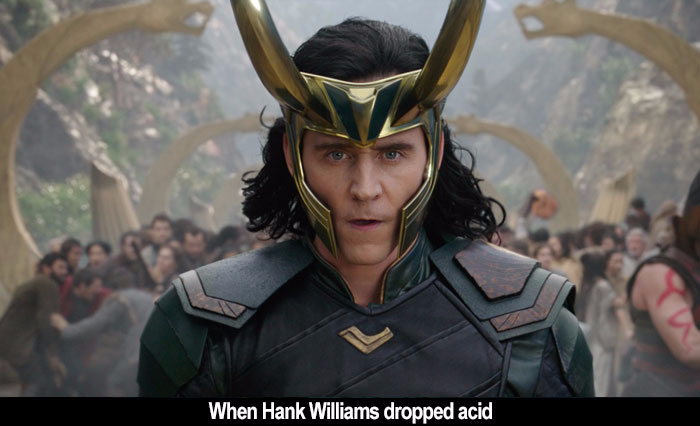 by Walter Chaw I've reached a limit with facility, I think--a point at which things that are professionally-executed and entirely meaningless just slide off into a kind of instant nothingness. I'm talking about machine-tooled product, a brand like Kleenex or Kellogg's, where the only time there's any awareness of consumption is when the experience of it is unexpected in some way. There's a reason people see the Virgin Mary in potato chips sometimes. Variation in extruded products is so exceedingly rare that it's akin to holy visitation: some accidental proof of the supernatural; a glitch in the Matrix. Marvel films are akin now to your daily lunch. You can remember the stray meal. Mostly, it's something you do knowing you've had one yesterday and are likely to have one tomorrow. If you're like most of us, you could probably eat better.

Thor: Ragnarok (hereafter Thor 3), is funnier than the usual Marvel product because it's directed by Taika Waititi (What We Do in the Shadows), who voices a giant blue rock monster in the film. It also has a thing where the eldest daughter of Odin (Anthony Hopkins), Hela (Cate Blanchett), is the embodiment of death. In Norse mythology, "Hel" is the daughter of Loki. In the Marvel Universe, she's a total badass who, in various slow-motion battles, demonstrates her ability to throw magic knives and kill lots of people. She helped Odin do a lot of murder, I guess, before Odin banished her somewhere and took on the role of benevolent ruler of Asgard. There's a parallel to this story as the picture begins with Loki (Tom Hiddleston), the trickster god and brother of thunder god Thor (Chris Hemsworth), pretending to be Odin and enjoying the pleasures of the crown. Anyway, if you wanted to you could make something of how powerful women are buried in history by the men who write the books. There's also a Valkyrie (Tessa Thompson) who is a total badass, too.

If you care, Hela takes over Asgard and Thor finds himself marooned on a colourful junkyard planet presided over by a quirky character actor revelling in his dotage (Jeff Goldblum). There, Thor is forced into a gladiatorial contest against Hulk (Mark Ruffalo), who, a few lunchtimes ago, flew off into a wormhole or something, and so here he is! Surprise! if you haven't seen the poster or any of the trailers. They team up and go fight Hela to save Asgard. Meanwhile, there's some Asgardian guy (Karl Urban) who decides to work for Hela and shows off a couple of assault rifles he got in Texas. This would be funnier if assault rifles weren't killing Americans at a legendary rate, but yes, it's funny that Texas is packed full of Texans. Urban's presence mainly reminds me that the better version of this sort of world-building is The Chronicles of Riddick, from which Thor 3 cribs not just Urban but also a scene where the conquering hero slumps in his new throne. Better would have been if Thor let Valkyrie sit in the throne--but, you know, let's not get crazy with the empowerment stuff.

The best part of Thor 3 is a three-minute sequence on Earth where Dr. Strange (Benedict Cumberbatch), now a Jedi Master instead of an apprentice, does all kinds of crazy shit to Thor and Loki. Incidentally, one of the post-credit sequences from a different lunch resurfaces here in its entirety; I've never seen that before. I don't, for what it's worth, understand the post-credits sequence of this film, but I'm sure I'll get it the next time I watch a movie very much like this one. I believe I laughed more during Thor 3 than during Avengers Whatever, although the jokes feel grafted onto it the way you would stick a tongue-moistened Cheerio to someone's forehead just because both the Cheerio and the forehead were there. Not much of the humour has anything to do with situation or character. They're just jokes. They're charming. And then there's lots of Marvel stuff that ties up a few strings while fraying a few others for next time. It's beautiful to look at, though. I'm sorry, what were we talking about?