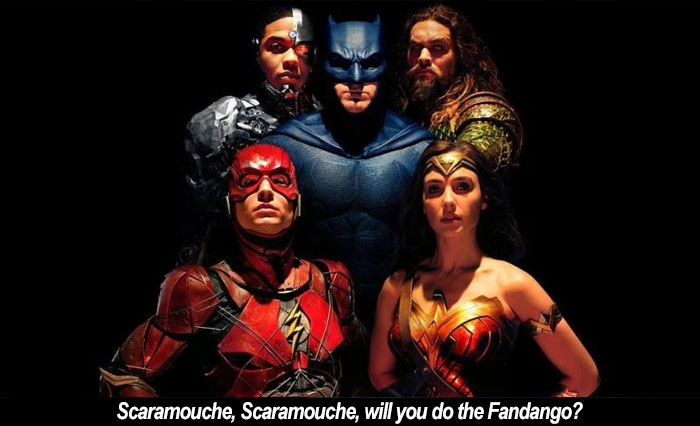 by Walter Chaw Marrying the worst parts of Zack Snyder with the worst parts of Joss Whedon (who stepped in to complete the film after Snyder had a family tragedy), DC's superhero team-up dirge Justice League shambles into unnatural half-life with a message of apocalyptic doomsaying presented now without puke filters, so that it looks like a movie my mom watches on her television with the motion-smoothing turned on. The same trick has been attempted with a script burdened by Whedon's patented hipster-ese, which went stale about halfway through "Buffy"'s run, let's face it. The Flash's non sequiturs (Whedon's suggesting he's autistic (which isn't funny)), Aquaman's hearty, get-a-haircut bro-clamations ("I dig it!" and "Whoa!" and so on)--all of it is so poorly timed that it's possible to become clinical about what happens when a punchline is grafted onto a piece at the eleventh hour, and it doesn't help that no one in this cast is known for being even remotely funny or glib. Jason Momoa is a lot of things; Noël Coward ain't one of them. When Wonder Woman (Gal Gadot) shakes her head bemusedly (I think) and says warmly (I guess), "Children. I work with children," you get that sick, embarrassed feeling that happens when you're watching a person you want to like succumb to flop sweat and overrehearsal.

It's not her fault, it's the film's for being awful without also being interesting. Justice League threatens to be interesting for exactly one minute when it shows a woman owner of a small grocery getting menaced by a couple of white guys. The implication is that the world is so fucked-up following the demise of Superman (Henry Cavill and his digitally-erased moustache) that hate crimes are back. And then the movie's not about that anymore. There's a good bit where the newly-resurrected Superman stops fighting something to save a building full of people--and then there's the only remotely emotional moment in the entire thing when you see Kevin Costner in a photograph holding a trout that is not Henry Cavill. The rest of it is disjointed, desperate casting-about--the filmic version of getting lost in the woods with idiots and it's getting dark. Batman (Ben Affleck) assembles the other superheroes from the poster to fight the bad guy from Thor 3 (there's also a mention of a goddess of death but Cate Blanchett was busy, right?) and CGI hench-things that are sort of like the Geonisian bug creatures from the Star Wars prequels. (Inspiring a reference to the Star Wars prequels probably not the desired result of the dumptrucks full of money engaged in the creation of this calamity.)

The consensus seems to be that Justice League at least isn't as bad as Suicide Squad, which is like comparing something favourably to eczema. Granted. Yes, you got me: it's better than skin disease. I would offer that Suicide Squad and Batman v Superman and Man of Steel were at least fascinating in their atrociousness while Justice League is so desperate to be pleasant (when its core is so obviously bleak) that the best thing you can say for it is that it's puzzling. Watch it in a theatre to witness half the audience tilt its head like a dog hearing a new noise. Consider that all that desperation shares time with two or three superhero origin stories crammed into whatever cranny's available, leaving the genesis of Cyborg (Ray Fisher) a garble right up until he bonds with Flash (Ezra Miller) over their being the team's "accidents," setting up a bro-bump that is never paid off because the script is a piecemeal slop-and-shuck. Flash has an imprisoned dad who something something garble garble, and then there's the pregnant moment where it appears as if Wonder Woman is going to make sexytime with Batman that caused half the opening-night crowd to physically recoil. Mark this as the instant that Affleck's romantic Q-score fell below Tom Cruise's. Anyway, there's a scene on Amazon Island and one in Atlantis; there's no fish-talking even though that's the whole deal with Aquaman (Momoa); and the bad guy is named after either a Herman Hesse novel people read in Intro to Cosmology or a band whose best song was "Magic Carpet Ride." Don't @ me.

And then of course there's a lot of punching that doesn't lead anywhere because nobody can be hurt, and Affleck shoehorned into a suit looking exactly like I do when I wear a sweater under a jacket that fit thirty pounds ago. It's fair to ask why these superbeings need to cling to the back of a vehicle to climb out of a hole but, you know, life is short enough as it is. Justice League is a hot mess, a film that was probably about something accidentally before it became about nothing on purpose. The thing to appreciate vis-à-vis Snyder's truncated run as the DC Cinematic Universe's showrunner is that he doesn't understand and maybe hates Superman. He captured the despair of our current state: the toxic masculinity, the triumph of mediocrity, the destruction of empathy and critical capacity. His Man of Steel and Batman v Superman predicted the Trump presidency and this new age of virulent anti-intellectualism and progressiveness-as-weakness. It was ugly as fuck and uncompromisingly pessimistic about the current state. They were films we deserved. Justice League is a late-game attempt to put lipstick and a dress on Ted Bundy. It's bent backwards across itself to be liked, forgetting that you first need to hire creators who are likeable. The most interesting thing about it will be the revelation that audiences might have actually gotten smarter since the election. God, you can hope, right?