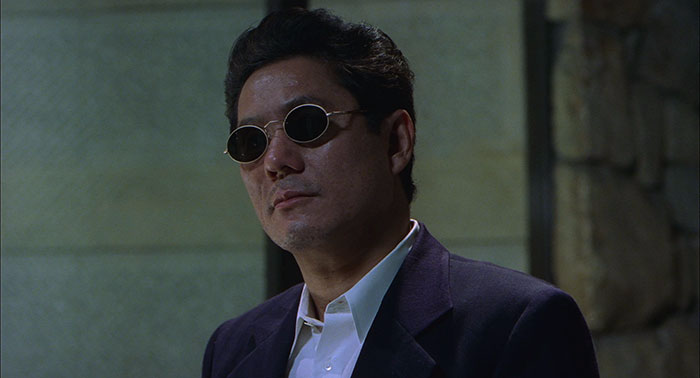 by Walter Chaw Nishi loves her very much, but when she tries to link arms with him for a photograph, he pulls away. He's not comfortable with his emotions. He's from both a culture and a profession that frowns on that sort of thing. When his co-workers talk about him, they do so in hushed tones and warn one another not to get too familiar, even in their gossip. He's lost a daughter and his wife is very ill. They make allowances for him one day and it results in the crippling of his partner. Nishi avenges him, but another young cop dies in the process. Nishi, dispassionate, empties his gun into the bad guy's skull. But his partner is still abandoned by his wife and child for not being the man he used to be. None of this is how it's supposed to work. Men are taught to be a specific way and promised rewards for their stoicism and brutality. I'm 44 years old. It's taken most of my adult life to begin to unravel the ways that expectation and breeding have made it hard for me to tell my wife, whom I love in a devastating way, "I love you." I was afraid to have kids because I didn't know if I could tell them I loved them. I have two. I tell them every day. I make myself. Takeshi Kitano's Hana-bi deals with the consequences of masculinity--perhaps the most trenchant exploration of the theme not written or directed by Walter Hill. The film understands that some men can only express themselves through motion, which isn't enough in the best of times and is laughably insufficient in the worst of them. Of all the '90s masterpieces of world cinema, Hana-bi is my favourite.

Nishi (Beat Takeshi) used to be a detective. As the film opens, he still is. The way his men talk, he's pretty good at his job. He's visiting his wife (Kayoko Kishimoto) in the hospital that fateful day his partner, Horibe (Ren Osugi), is paralyzed--visiting her at Horibe's insistence. Nishi sits quietly in the room while she gathers her things. Their doctor has told them there's nothing more to be done. The disease has metastasized. The grief over their lost child hasn't helped her resilience. Later, so that no one trips over it, Nishi moves a tricycle that someone has abandoned in a walkway of their apartment complex. He stands there looking at it for a second before he touches it. He stands there looking at it for a second after he does, too. Takeshi Kitano made a name for himself as one half of a comedy duo in Japan called "The Two Beats." When he acts, he takes on the name "Beat" Takeshi. When he directs and writes, he uses his given name. He's hosted game shows. He was a star--maybe the most well-known star--in Japan for a while. When Kinji Fukasaku, with whom Kitano would work in a few years' time as an actor on Battle Royale, bowed out of Violent Cop because Kitano's television schedule proved too inconvenient, Kitano took over, rewrote the screenplay, and produced something no one in Japan expected from a noted comedian. Hana-bi is his seventh film from an eight-year period and arguably his best. (It's this or Sonatine.) What Japanese audiences especially didn't anticipate was that Kitano's style would be transcendental, like an Ozu film or a Wallace Stevens poem. There's violence in his movies, sudden and unexpected and occasionally grisly, but without the kind of cathartic release that would indicate anything like a traditional genre picture. There's humour in them, as well. Kitano favours slapstick: exquisitely-timed pratfalls and, in this film, fireworks, delayed, blowing up in Nishi's face to his wife's delight. The humour is as sudden and unexpected as the violence. For Kitano, they're opposite sides of the same coin.

The rest of it is just the longueurs of the day-to-day. It's waiting, and planning, and there's a lot of regret. When Nishi thinks back to the day he left his men to be ambushed while he was with his ailing wife, Kitano slows everything down so much that the explosions of blood are almost contemplative. They bloom like fireworks. And then they fade away. "Hana-bi" is one word composed of two, "fire" and "flower." (In other words, "fireworks.") As therapy, his partner Horibe paints with supplies that Nishi has sent him, the better to pass the time. One of the paintings has the Kanji symbol for "light," painted in yellow, impacting with the symbol for "snow." Then there's a large splash of red that spells out "suicide." Prior to the film, Kitano was involved in a serious motor scooter accident that resulted in partial paralysis of his face. It gives him a deadpan expression that lands somewhere between Buster Keaton and Clint Eastwood. Always distinctive, Kitano after the accident became iconic. As part of his recovery, he painted. Several of his paintings double for Horibe's. They are animal/plant hybrids, pointillism considerations of children at the shore. Kitano later called the accident an "unconscious suicide attempt." Horibe tells Nishi after it all goes wrong that he's thinking about killing himself. Nishi doesn't say anything. After Nishi leaves, the tide comes in and laps at Horibe's chair. Horibe watches his feet get wet. We understand that he can't feel the cold. Hana-bi advances its plot without narrative exposition. It's patient. It doesn't take its audience for granted. It's for people who have experienced love and loss. It's for men who don't know how to express their vulnerability and sadness. Men who are, as a result, violent sometimes--self-destructive; suicidal.

Nishi is in deep with the Yakuza. He's taken out some loans he can't pay back and they're after him. He hatches a plan to rob a bank and then he executes it, to the glee of the brutal junkyard owner (Tetsu Watanabe) who sort of helps him. He pays his debt and he takes his wife on one last trip to see the ocean. They camp, play cards, work a wooden puzzle, see some tourist attractions, and set off fireworks. The Yakuza wants interest and Nishi shields his wife from their pursuit. A shot is fired at one point and Nishi's wife, off at a distance, looks up in the sky for the fire flower. There's a lot of laughter in Hana-bi. It's the kind that married couples share: unself-conscious, born of years together. There's an extraordinary amount of sadness between Nishi and his wife, though they never discuss what they've lost, her impending death, or how it is that Nishi lost his job with the Force yet they can still afford to go away on this trip together. It's too late for explanations. Explanations, Kitano understands, don't answer the questions the universe tends to pose eventually. Hana-bi hears the things that go unspoken between men and women; between men who are friends and men who are at different ranks in their profession. Kitano's editing often gives the impression that his character has just spoken, allowing Nishi to occupy space without needing to contribute dialogue. There's a gun battle here set inside a car that's over in an instant, although it echoes back through that painting of suicide and forward to the moment where the cops chasing Nishi to the sea consider the scene's implications. Every moment of the picture is pregnant with the next, the child of the previous. It's film as existential philosophy. Hana-bi transcends its medium. I think about Nishi's wife trying to give dead flowers some water. I think about it every day. 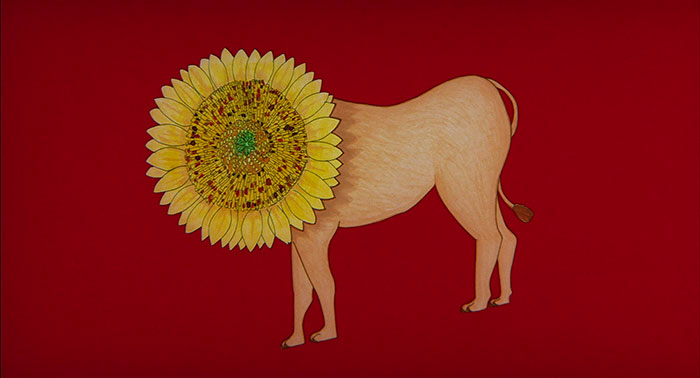 THE BLU-RAY DISC
While Film Movement's Blu-ray release of Hana-Bi marks the film's HiDef debut in region A, it's been available on BD in foreign regions for over a year. Whatever the reasons for the delay, here it is and it's fantastic, though the 1.85:1, 1080p transfer gracing this edition is likely the same one used for the well-received, handsomely-packaged German release from 2015. In the U.S., the best option to see Hana-bi until now was an out-of-print DVD from 2002 that suffered from compression artifacts, and the image on this disc, with its clean source print and finely-tuned grain structure, represents a quantum leap in quality, even if it ultimately leaves room for a better, fuller development of the movie's colour palette. In short, it looks slightly washed-out. Maybe it's just in comparison to the richness of the emotional palette that the saturation suffers--it's difficult to say. I hope the presentation is definitive, as I would like to stop buying reissues of this title at some point. The Japanese-language LPCM 2.0 stereo audio is the very definition of serviceable. Again, it's superior to the DVD's lossy soundtrack, yet it's unimpressive in and of itself.

A 27-minute making-of doc from the mid-'90s, sourced from an old fullscreen (i.e., 1.33:1) tape, mixes snippets of a Kitano interview, clips elucidating his past stardom, and valuable behind-the-scenes material, including B-roll revealing that for as sombre as Hana-bi is, its set was generally filled with hilarity. Kitano claims credit for a flower falling off a bush and at one point writes a scene on a piece of paper he hands to an actor immediately before shooting it, then chortles from his chair as he watches a monitor. He's a comedian at heart. For him to produce something like Hana-bi from such bonhomie speaks volumes about his vision and control. At the end, he says that just because he's won an award doesn't mean he's going to change what he does. And indeed, he didn't. Although his films never again achieve this perfect balance of pathos and explosion, of contemplation and movement, they do remain uncompromised and singular.

David Fear of ROLLING STONE contributes a feature-length yakker that narrates a little too much and explains what doesn't need explaining a little too much, but along the way he manages to impart a few interesting bits of trivia. If I don't like the glibness, I realize that's more of a taste thing. Fear's is a surface analysis but a decent primer. Better is the Jaspar Sharp essay contained in the insert booklet. It resists exposition in a way the commentary does not (exposition for a film as minimal as Hana-bi seems at once boorish and something like a betrayal) and provides a more concise overview of the director's career, touching not only on this film's winning the Golden Lion at Venice but also the initial coolness that greeted Kitano's nihilistic, violent film persona in Japan. The Blu-ray opens with the Film Movement promo reel along with pushed trailers for The Quiet Earth and Kitano's Violent Cop and Boiling Point. Through the menu, one can also access previews for After the Storm, Harmonium, and Soul on a String. Anyway, you should buy this. Buy two copies and give one to someone you love and respect. 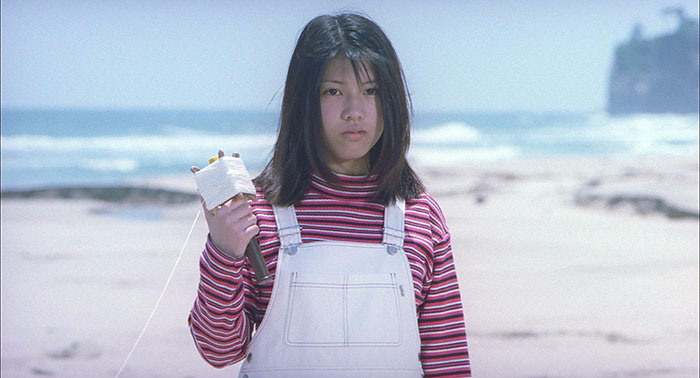