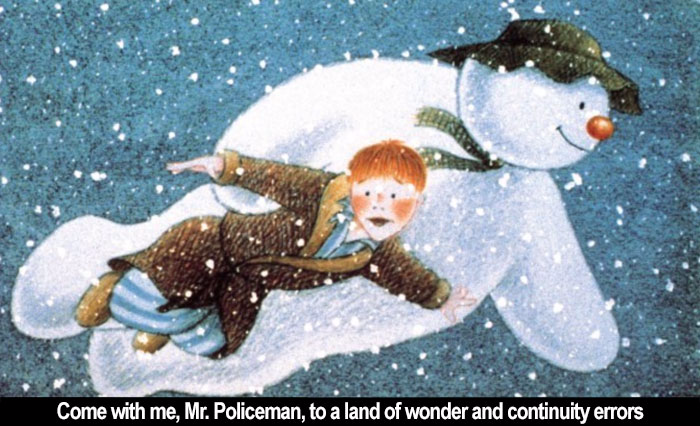 by Walter Chaw Tomas Alfredson's The Snowman, an adaptation of the seventh in Jo Nesbø's literary crime series, treats its narrative as gestural performance art: a suggestion of a suggestion of genre. When it's fascinating, it operates with a certain dream logic, where one thing leads to another thing senselessly, nightmarishly, the dreamer buoyed along powerless to affect his own fate within the larger, obscure narrative. Harrison Ford famously complained that Blade Runner is a movie about a detective who doesn't do any detecting. The Snowman is a movie about a detective who can't do any detecting because there isn't any connective tissue. No matter what the teasing notes left by its serial killer claim, there are no clues. It's very much like Andrew Fleming's own abortive attempt at a franchise, Nancy Drew, which is also alien in its behaviour, acting like a movie would act if it were made by a sea cucumber. Consider a scene in The Snowman that pushes the story to its conclusion: there's a revelation, a key piece of evidence or something, and a location, and the heroine, Katrine (Rebecca Ferguson), stands up at her desk. A male colleague, who was sitting in a cubicle across from Katrine, suddenly teleports to the balcony above her as she leaves. He asks if she's all right. The better question would be if there was so little footage shot that every bit of it was used, continuity be damned. The great Thelma Schoonmaker was brought in at the eleventh hour, presumably at the behest of executive producer Martin Scorsese (once slated to direct the film), in a presumed attempt to save the project. Schoonmaker, for everything she's great at, was never that great at continuity under the best of circumstances. Something Scorsese played around with in Shutter Island. Something that occasionally turns The Snowman into a Gertrude Stein piece.

Like the scene late in the game where alcoholic sad detective Harry Hole (Michael Fassbender) has a conversation with ex-wife Rakel (Charlotte Gainsbourg) and the camera cuts the top of her head off. Like the first 90 seconds of the film, where there's an obvious compositional correction--DP Dion Beebe jerks the camera over to centre Hole in the frame--that would've hit the cutting-room floor in an ordinary picture. There's a lot that's interesting about The Snowman, in other words, none of it having anything to do with the material. For the curious, it's the standard thing where some sicko is murdering people and leaving calling cards while a sad-sack gumshoe finds brief meaning in the burnt-out ends of his days in the pursuit of him. In the good version of these narratives, the detective learns that he knows less than he did when he started. In The Snowman, there's a deeply desperate, almost adorable attempt to set the table for a sequel. It's a glorious mess, grandiose and gravid, with its greatest irony being that even as it's aspiring to Insomnia (Christopher Nolan's, not Erik Skjoldbjærg's), it proves to be a cure for the condition. There's precedent for noirs that make no sense, of course. The Big Sleep is the conspicuous one, but that still has a certain internal logic, a kinetic energy, a conspicuous lack of unintentional hilarity. The Snowman's greatest crime isn't that it doesn't make sense, it's that it's both stupefyingly boring and really funny. It's crippled by sequences like the one where Harry and Katrine drive away from a chicken coop in a blizzard, get a phone call and turn around to drive back, but now it's nighttime and hours later. I like, too, when Chloë Sevigny, playing a chicken executioner, gets a hilariously truncated cameo, only to reappear as her character's twin sister. Incidentally, the movie is not aided by snowman reaction shots. Yep. The Snowman is awesomely terrible.

There are three timelines in The Snowman: the first giving backstory, suggesting the film is the result of a bad experience trying to learn Norwegian civics; the second featuring one of the strangest performances of the century by an ailing Val Kilmer as another alcoholic detective; the last featuring Harry and Katrine and a twist that isn't actually a twist because there's no plot to support it. The Snowman is stunningly incompetent in a way only possible when everyone involved is brilliant and accomplished. It's like the Titanic becoming the most ironic metaphor for hubris in the modern era. Movies this bad come along as a result of great arrogance--the idea that no matter how little preparation there was, or care in the adaptation, or time and money afforded in post-production, the result would be good. The last scene in the film, set on a frozen lake, is as unbelievably gorgeous as the action--Harry getting gunned down with Looney Tunes abruptness--is unbelievably silly. The Snowman is a pratfall by the prima ballerina of the Bolshoi. It's not without interest, and it deserves every ounce of the opprobrium it's attracted. In the final calculation, all its unintentional hilarity and boredom aside, it's not an altogether terrible adaptation of the Wallace Stevens poem "The Snow Man"--which is also not, as it happens, a good detective movie.