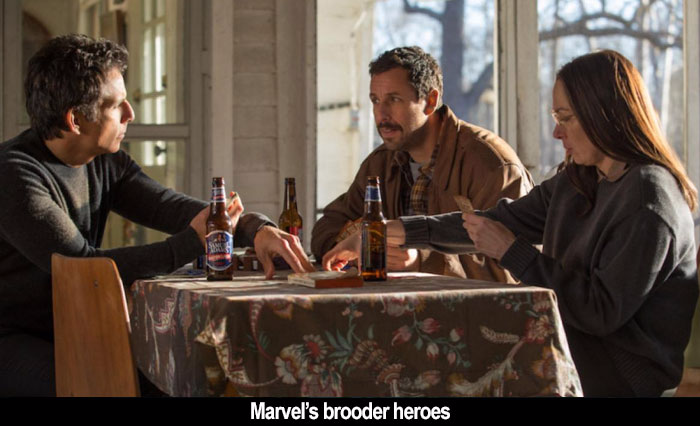 by Angelo Muredda Late in Noah Baumbach's The Meyerowitz Stories (New and Selected), one-time piano protégé turned arrested adult Danny Meyerowitz (Adam Sandler) bemoans the fact that his father's casual abuse over the years never culminated in that one unforgivable thing he or his sister Jean (Elizabeth Marvel) could point to as a deal-breaker, beyond which no love or mercy could be extended. Instead, he says, Harold Meyerowitz (Dustin Huffman)--a decently gifted sculptor and by most accounts better college professor whose work is now worth less than the attic it's stored in--hit them with "tiny things every day. Drip, drip, drip." With Kicking and Screaming and The Squid and the Whale, Baumbach carved out an impressive niche for himself as a chronicler of how parents' micro-aggressions, that steady drip of petty criticisms and unnecessarily cutting observations, leave a mark on their hyper-literate upper-middle-class American children. But he's never found so clear a voice to get across both the anguish and the humour of that condition as he has in his newest, a fussily-constructed but involving and at times impossibly sad family drama about the existential terror of being just smart enough and talented enough to know you're nothing special.

Sandler's Danny is our focalizer for the first of a number of interwoven stories of varying lengths and dramatic impact, a conceit that isn't quite as necessary as Baumbach seems to think. A medium talent at music in his youth, Danny, in the film's opening moments, is stuck in New York City traffic (made better by the nostalgic sounds of Lisa Lisa & Cult Jam's "Head to Toe" on the radio) while seeing his daughter (Grace Van Patten) off to film school at Bard following his recent separation from his wife. The college trip brings him back into the orbit of his charming but embittered father, who prefers to speak of his younger brother, Matthew (Ben Stiller)--the product of a better marriage and, in his mind, a fresher start than Danny and Jean. The second segment follows financial guru Matthew as he transitions from the role of successful son, in which he's run laps around his middling father, to a more ill-defined part at the hospital by Harold's side following a neurological episode that forces Matthew to dwell on the starkly different ways he and his siblings have been raised. His own life, Matthew realizes through the veil of financial stability and distance, was provided for to the point of suffocation, while Danny's and Jean's were discounted at every turn, their nagging insistence on standing by their father through the mean jokes and indifference an insulting reminder of Harold’s failings in marriage and fatherhood as in art. From there, the film becomes something of an animated ensemble tableau composed of vignettes about the extended family both together and apart, coping not just with Harold's illness but with the potentially more daunting fact that he might survive and leave them to redefine their relationships all over again.

As pedigreed as the ensemble is--consider Harold's murderers' row of wives current and former, which includes Candice Bergen and Emma Thompson--the film's clear MVP is Sandler. Baumbach is smart to cast an incredibly successful performer who, for all his riches, carries himself like a put-upon working-class loser perpetually among the jet set, and who wears his insecurities on the furrowed lines of his forehead. Sandler--whose safe commercial choices, at the risk of playing pop psychologist, suggest someone who hasn't entirely recovered from the respective commercial and critical drubbings of dramatic experiments like Spanglish and Funny People--finds something raw and humane in the role of a man unable to appreciate his own modest talents unless his father or brother acknowledges them first. Although he struggles with early lines of dialogue indicating an ease at talking to art dealers and university administrators that frankly stretches his limited character repertoire to date, Sandler's Danny is as fully realized and endearing a character as Baumbach has ever written, a deceptively flinty man who's survived his childhood traumas by learning to lower his expectations, accepting that while his father has made his share of work dedicated to and named after Matthew, "there are no Dannies--or Jeans."

Though that might suggest a film as misanthropic and cynical about the persistence of old family wounds as Baumbach's Margot at the Wedding (and perhaps a conclusion as implausibly sentimental), The Meyerowitz Stories (New and Selected) is an appreciably warmer film, and authentically so. Baumbach is perceptive about the way that barbs between brothers or fathers and sons can be couched in a prickly sort of love, and, even more so, he's incisive about the way that hospitals in times of need can serve as great class levellers, leaving the well-connected Matthew and precarious Danny feeling equally helpless. (As good as Marvel is at rendering a life lived mostly in private, Baumbach is less thoughtful about Jean, a thinly-sketched, shy woman who tells a parenthetical story of childhood trauma partway through that her brothers predictably turn into an opportunity to work out their own shit.) And he's sympathetic to the way men like Harold, primed for success and trained, over time, to settle for the faintest trace of name recognition, lack the emotional acuity to dole out what little love they have to give--obsessively clinging to throwaway kind words from Hollywood strangers like Sigourney Weaver while the ones who love them suffer by their bedside.