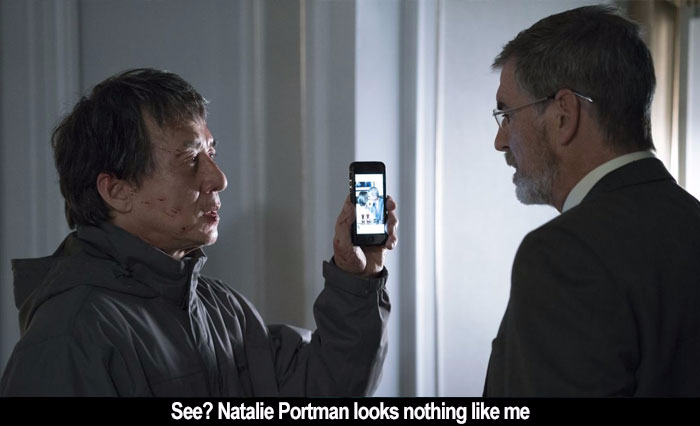 **½/****
starring Jackie Chan, Pierce Brosnan
screenplay by David Marconi, based on the novel The Chinaman by Stephen Leather
directed by Martin Campbell

by Walter Chaw Martin Campbell's The Foreigner, based on Stephen Leather's novel The Chinaman, showcases the great, the incomparable, Jackie Chan as a grief-stricken man with a Special Forces past, galvanized into action when an IRA bomb kills his only, and last, daughter in a chichi London retail block. Having failed in his attempts to bribe London officials for names, Chan's Quan, restaurateur/owner of The Happy Peacock, focuses his attentions on former IRA/Sinn Fein leader Hennessy (Pierce Brosnan). Quan terrorizes the terrorists, stakes them out at Hennessy's farmhouse/fortress, and generally makes life miserable for everyone until he finds the people responsible for his daughter's death. It's a role that Liam Neeson would have played had there not been a recent hue and cry over yellowface and whitewashing, and so Chan, in the twilight of his action career, is forced into somewhat thankless service in a film that wants to be more like The Fourth Protocol than like Police Story. The Foreigner isn't a great film, but it's an interesting one for all its mediocrity.

That's because Chan, who has made a career as perhaps the single biggest and most important star in the world over the last forty years, made it on a very particular personality. He's not indestructible, implacable, driven by fury like a Bruce Lee or, definitely, a Jet Li. Rather, he's vulnerable, goofy even. He improvises a lot. When he hits someone, he shakes his hand afterwards as though it hurt. He has things broken on him and he falls down a lot. Bruce and Jet couldn't have played the Drunken Master. Nor Sammo Hung. Chan brought a curious humanity to the Kung Fu genre. When he got married a couple of decades ago, some girls killed themselves. In The Foreigner, his persona takes on a certain pathos because of his age. He's slowed down. At sixty, of course he has. But when he shakes his hand now, or rubs his arm after getting hit by a stick, it seems more an allowance for age than a clown and his trademark shtick.

More, The Foreigner, because it's about a lot of talking and other garbage that is only hard to follow because it's so boring and rote, offers plenty of time to contemplate Chan and his career. It's fruitful to consider that this globally famous and powerful man was, when he belatedly broke through in Hollywood, consistently cast in humiliating sidekick roles next to Chris Tucker (three times) and Owen Wilson (twice). The running gag in the Tucker partnership? That Tucker could never get it straight whether Chan was Chinese or Japanese. If Chan couldn't "cross over" to Hollywood, no Asian leading man ever could. Indeed, let's mark the last time there was an Asian romantic lead in a mainstream-produced American film. Was it 1993's The Joy Luck Club? What was it before that? There's a sense in The Foreigner, then, of a certain surrender to the way things are. Quan, for all his decorations in war, is reduced to first a victimized refugee emigrating from war on a boat with his young family, then a blue-collar worker hoping to provide a better future for his daughter.

He was used by the Americans as a sapper in Vietnam. No one will answer the phone now when he needs help. The IRA is portrayed as a neutered political machine no different from any other party in British politics at this point--an idea underscored by Hennessy's cuckolding by his own nephew and the myriad other betrayals he suffers over the course of the film. An old colleague notes that Hennessy's a pale shadow of his former self. Hennessy, for his part, recognizes that the world has moved on to newer atrocities without him. The Foreigner is about how quickly everything becomes decrepit, and how fast everything becomes incomprehensible. The older I get, the less sure I am of anything I used to be sure about. Everything is grey. Chan plays Quan as animated only by the idea that he will bring his daughter's killers to justice. When he finally gets the chance, as we know that he will, it's all hollow anyway because the police are on the verge of doing what Quan wants to do. The bad guys are going to die, it's just a matter of who does it. Everyone's going to die. No one is without sin. The best part of the film is when the London police pull out a car battery to torture a woman for information. The Foreigner doesn't make any judgments about that either way. It's for the greater good, right? Right?