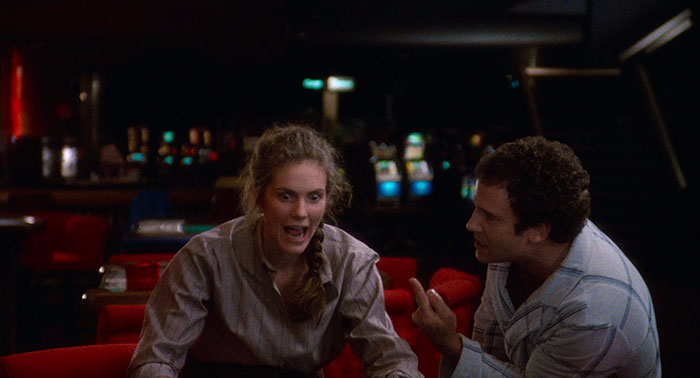 by Bryant Frazer Early in Lost in America, David Howard (Albert Brooks) is trying to convince his wife, Linda (Julie Hagerty), that it's a good idea to abandon their Los Angeles house in favour of an interstate-ready mobile home. He describes the amenities in detail--it even has a "microwave that browns"--and outlines his dangerously misguided fantasy of dropping out of society to explore the country. "Linda," he says, "this is just like Easy Rider, except now it's our turn." That's a good line, and not just because Albert Brooks--round-faced, pushing 40, with enormous glasses and a distinctive Jewfro--is a physically and temperamentally unlikely candidate for the Easy Rider lifestyle. It's really funny because it's so clearly a terrible idea. In a rush of pride and vocal anger at being passed over for a desired promotion, David lost his job as an advertising copywriter, unwrapping himself from the protective swaddle of gainful corporate employment. Now he wants to drag Linda, a department-store HR functionary, into the void with him. It's like a car wreck in slow-motion, except the guy driving sold his air bags for gas money and is delivering a peppy monologue about how great it feels not to be wearing a seat belt. This, we understand, is a calamity in the making.

Also, David seems to have forgotten how Easy Rider ends, which is a telling lapse on his part. Lost in America doesn't quite develop into the sprawling road trip it at first appears to be premised on (the odyssey hits a speed bump in Vegas and stalls out somewhere in Arizona), but it does deliver the comeuppance that "now it's our turn" so richly deserves. "Now it's our turn" is the assertion of a baby boomer who feels entitled to access the assumed perks of a modishly déclassé lifestyle in spite of having burrowed fully into the lush bosom of the urban bourgeoisie. David is, in the appropriate parlance, a sell-out. Severed from his cushy paycheck, he suddenly dreams of redeeming his dormant youthful idealism for a ticket to a permanent vacation.

When the born-to-be-wild fantasy crashes and burns, his formerly high-value persuasion skills, so useful in parting herds of consumers from their money, turn out to be worthless at human scale. At precisely the film's midpoint, in Lost in America's best, most pivotal scene--the one where David's perky optimism and enthusiastic self-confidence are most at odds with the reality of his situation--he tries to convince a friendly, inexplicably patient casino manager (Garry Marshall, fantastic) to return all of the savings that Linda lost at the roulette table the night before, pitching it as "the boldest experiment in advertising history." For Brooks, as writer, director, and performer, it's a fantastic and career-defining balancing act. We understand that David is enormously self-absorbed and increasingly desperate, but his guilelessness is endearing. As Marshall's character puts it, "You're a nice guy. You make me laugh and everything, but our policy is we can't give your money back. I'm real sorry."

As cinema, Lost in America is nothing fancy. It's structured episodically, with each comic vignette cooked up by Brooks and co-screenwriter Monica Johnson following upon the last in quick succession, providing punctuation even as it opens up a new front, and if the visual style is largely straightforward shot/reverse shot, it doesn't degrade into TV-style over-the-shoulder banality. Brooks executes a few laugh-out-loud visual gags, like the cut from an alarm clock flipping over to 6 a.m. to a crashed-out Brooks, spread across the gap between two heart-shaped beds hurriedly shoved together in a cut-rate honeymoon suite. A wide shot of David and Linda's motor home climbing the first slope of a road zigzagging vertically up a mountain wouldn't look entirely out of place in a Kiarostami movie. And there's some terrific visual storytelling in Linda's office when an incredibly high-strung David bursts in to tell her, "We have to touch Indians. We have to see the mountains and the prairies and the whole rest of that song." The scene is composed with Linda's desk between them, suggesting her reservations in the face of his proposal and the dynamics in the room; confined mainly to the right-hand third of the picture, David's gesticulations and full-body spasms threaten to burst through the boundaries of the frame. (Hagerty has the thankless task of playing demure straight woman to Brooks's motormouthed neurotic, but she does great work. Reacting with quiet alarm to his outsized energy, her usual understated shtick suggests the internal life of a practised poker face.) The simplicity of the blocking is balanced by careful work from cinematographer Eric Saarinen, who lights actors' faces gently, with soft but revealing transitions between light and shadow bringing their features into relief. Environments like the Vegas casino where Linda gambles away the Howards' oft-referenced "nest egg" at the roulette table, pinning her hopes on 22, register as surprisingly dimly lit: the forbidding, bad-dream counterparts to capital-fuelled fantasies.

As a product of the Reagan era, Lost in America illustrated a social and political divide that has endured and strengthened over the last three decades of culture war. It never frames its subject in explicitly political terms, though there are obvious issues of unexamined privilege at play when David starts looking for a six-figure job in a small town in the middle of the Arizona desert. While Brooks, who was born into a Beverly Hills showbiz family, makes no claims to understand the lifestyle of flyover country, he knows a few things about the upper-middle-class, and that's why his critique of David's position is laced with sympathy. That six-figure paycheck may sound generous, but it's really the leash that keeps David tethered. When he lashes out after failing to get the big promotion, his boss helpfully explains that he's just too good at his current job to move to a more senior position; he's so efficient as a peon that the company would never consider making him a partner! For a guy like this, dropping off the grid may be an untenable coping strategy, yet the urge to say, finally, "no more" is at least admirable. Linda's gambling problem struck me at first as a sexist construct--there the wife goes, spoiling the husband's plans--until I realized that she, too, is being driven mad. Her losses are just another form of exploitation, as a different kind of corporation takes advantage of her desires and insecurity. David's heart is on his sleeve--she keeps hers tucked inside until circumstances fill it to bursting. Lost in America is wise about this stuff; the film gets a lot of mileage from mocking David's cluelessness, but it gets its sting in acknowledging the institutions that have evolved to keep him (us) in the proper place--the capitalist system that keeps him (us) eating shit.

THE BLU-RAY DISC
Nobody is going to describe Lost in America as a home-theatre reference disc, although Criterion has done its usual estimable job with the transfer. Per the liner notes, Brooks supervised a new 2K transfer of a freshly-minted 35mm interpositive sourced from the original negative. The standard noise-reduction and digital restoration tools were applied before getting a generous 36 Mbps (average) Blu-ray encode. Cinematographer Saarinen already had some documentary experience when he made the film, and mostly the disc honours his straightforward lensing. The 1.85:1, 1080p picture is generally soft, perhaps owing to on-camera filtration. (The grain layer is fairly sharp, and omnipresent.) Colours are muted overall--mostly drab greys and browns indoors and dusty desert landscapes outdoors. I did note that the very occasional saturated red was prone to interact a little oddly with all that film grain, taking on an almost sparkly appearance. Dynamic range is likely accurate but tends towards the shadows; only the blue sky in daylight exteriors is rendered on the brighter end of the spectrum. All in all, it seems pretty faithful to the 35mm aesthetic. The LPCM monaural soundtrack was remastered from the 35mm mag track; though hiss and hum and the like were digitally removed, plenty of the original audio flavour remains. It's quite apparent, for example, that the "now it's our turn" line so revealing of David's mindset was dubbed in post-production. There's not much going on to give your speakers a workout, though the inevitable appearance of "Born to Be Wild" has a satisfyingly beefy thump to it.

Extras were commissioned especially for this edition by Criterion. The marquee feature is "Lost in America: A Conversation with Albert Brooks and Robert Weide" (30 mins., HD), in which Weide (he made the American Masters documentary on Woody Allen and has directed 28 episodes of "Curb Your Enthusiasm", among other credits) spends a half-hour interviewing Brooks. Their conversation starts at the beginning, more or less, with Brooks remembering his father, Harry Einstein, who performed under the ostensibly Greek moniker of Parkyakarkus--and died on stage, after delivering a monologue at a celebrity roast. Brooks was 11 at the time. He remembers the "world's worst ventriloquist" sketch that got him booked on TV variety shows. "It just made dogs laugh," he jokes as a vintage clip of the routine (from a 1972 episode of Flip Wilson's eponymous series) plays, although he says those early TV appearances gave him the confidence to trust his instincts as a comedian. The first eight minutes are Albert Brooks in a nutshell, and they get the job done; the rest of the piece is devoted to Lost in America--a film about "dropping out and dropping in two weeks later," as Brooks puts it. Weide obviously knows Brooks and his work well, and gets him to candidly discuss casting and financing, deliver genuinely interesting anecdotes about the film's performances, and pay tribute to Johnson, his late co-writer. Most surprisingly, perhaps, Brooks reveals that the film's well-loved "nest egg" scene, in which David lectures Linda on the importance of saving, was added at the last minute to solve a problem identified in test screenings.

Three more interviews are on board, amply illustrated by film clips (including material from Broadcast News and Brooks's own Real Life and Modern Romance) and production stills. "Julie Hagerty on Lost in America" (11 mins., HD) has Hagerty speaking at length on such topics as Brooks's free-flowing approach to shooting dialogue scenes, unencumbered by repeated calls to cut and do a retake. For comparison's sake, she also recalls some of her work with the Zucker Brothers (Airplane!) and Woody Allen (A Midsummer Night's Sex Comedy). She offers her take on the characters, too. "I think that Linda felt very liberated by this new adventure," she says. "And the longer they went, the worse it was for [David]. He hated everything." In "Only Albert: James L. Brooks on Albert Brooks" (15 mins., HD), the Broadcast News helmer and screenwriter starts by remembering the heyday of 1970s TV comedy, when he met Albert Brooks in Penny Marshall and Rob Reiner's kitchen, and then walks his way forward to a lengthy consideration of Lost in America itself. "It's just poison for me to be analytical about a picture," he says. "But the picture is so interesting." Finally, "Albert First: An Interview with Herb Nanas" (12 mins., HD) finds Lost in America's executive producer (and bit player) looking back at his long working relationship with Brooks, his first client as a talent manager, as well as taking some side routes, like the one where he describes recruiting Sylvester Stallone after seeing him in Lords of Flatbush and setting up the Rocky series. "Always, in my heart, it was Albert first," he says.

Putting a lid on the package are a theatrical trailer in HD (and running close to three minutes) plus a 12-page foldout, designed in the distinctive style of a mid-1980s cigarette advertisement, featuring "The $100,000 Box," a new essay by film critic Scott Tobias that includes this gem: "They can't drop out of society. They are society." 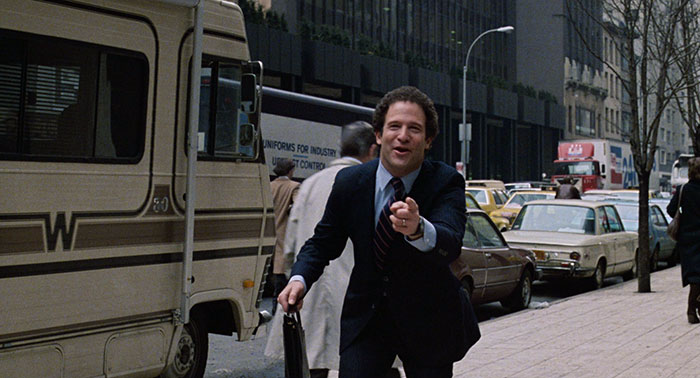