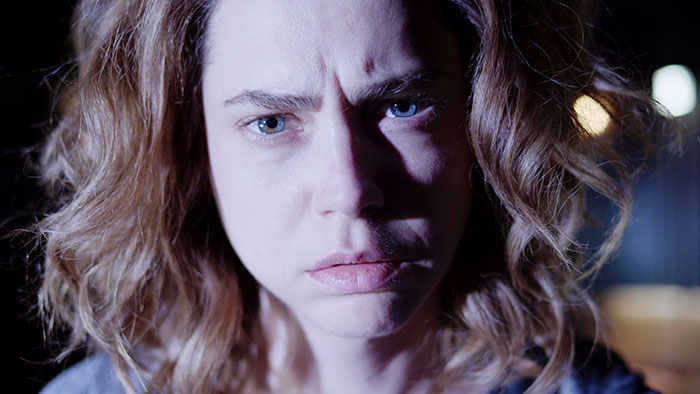 by Bill Chambers It's not uncommon for a long-running horror series to embroider an increasingly convoluted mythology over time, as the kind of premise that launches horror icons also tends to be too primal to sustain a franchise. That's why Michael Myers became part of the Thorn cult and Freddy Krueger sired offspring while his own backstory continued to blossom. The Chucky saga, the story of a bloodthirsty Cabbage Patch Kid run amok, is no exception, but it's utterly unique in how the style of these films has pivoted, to use a buzzword, with the evolving narrative. What began as a mostly straight-faced slasher trilogy with a different identity altogether--these were Child's Play movies--was continued seven years later as a tongue-in-cheek ode to monster mash-ups with 1998's Bride of Chucky. Post-modernism then entered the picture and the comedy was pushed to the nth in Chucky creator Don Mancini's directorial debut Seed of Chucky, which seemed to exceed the threshold for camp shared by both the franchise and its fans. Another seven years passed (incidentally, the mythical length of time it takes for the human body to shed its skin) before Mancini's Curse of Chucky resurrected the title character, this time as the cursed object in an old-dark-house chiller. Now Cult of Chucky sees Mancini retrofitting his Mickey Mouse once again for a Bad Dreams-style psycho-ward thriller. Say what you will about Mancini being a maker of Chucky movies almost exclusively (he's the rare auteur to initiate, then stay with, a horror franchise), but within these limited parameters he's had an opportunity to show more range than most genre filmmakers.

Ostensibly though unofficially a reboot, Curse of Chucky didn't entirely abandon the meta games that had turned the series into a funhouse reflection of itself, casting Fiona Dourif--daughter of Brad, the indelible voice of Chucky--in the lead role and having fun perverting their family dynamic. (Nica is the offspring of Chucky's human alter ego, Charles Lee Ray (also Brad Dourif), and tried to kill her in the womb.) Both Dourifs return in Cult of Chucky, which opens with Fiona's paraplegic Nica having been successfully gaslighted into believing she, not Chucky, is responsible for the murders that took place in the previous film. It's still ludicrous, of course, that the charge ever stuck enough to land Nica in an institution--no disabled person would ever be given that much credit. But while it sounds misanthropic that the Chucky flicks, especially the later ones, don't sentimentalize anybody, it's actually quite egalitarian to suspend taboos across the board when dealing with a children's toy as serial killer. Early on in Cult of Chucky, for instance, Nica is transferred to a more rehabilitative (and coed) facility, where an able-bodied inmate takes an immediate shine to her. She trades him a stick of Juicy Fruit for a cigarette, and then there's a shock cut to the two of them banging each other's brains out in her wheelchair. In any other film, that edit would be a cliché, but here it's a potentially history-making elision of the traditional apologias that greet-slash-cloud the sexualization of disabled characters. Nica gets laid and there's no angst about it. Cult of Chucky is woke as fuck.

It's so woke, in fact, that it takes the most novel parts of itself--like Carlos (Zak Santiago), the gay, married orderly who tells Nica not to mistake his chivalry for friendliness, only to prove startlingly ornamental--for granted. Or, I should say: then the plot kicks in. And it's pretty absurd. Nica is forced to do group therapy with the usual colourful assortment of weirdos, such as the guy with whom she's already intimately acquainted, Michael (Adam Hurtig), who has a split-personality disorder; Madeleine (Elisabeth Rosen), a distraught mother who committed infanticide; and Claire (Grace Lynn Kung), an arsonist. Dr. Foley (Michael Therriault), Nica's prison shrink, presides over their sessions, and tries a little exposure therapy on Nica by introducing a brand-new, fresh-out-of-the-box Chucky into the mix. It backfires when Madeleine purloins the doll, treating it like a surrogate for her dead baby. Things start to go bump in the night shortly thereafter--at which point Tiffany (Jennifer Tilly) shows up at the hospital with a gift for Nica from her deceased niece: a second Chucky! Meanwhile, young Andy (Alex Vincent) from the first film is all grown up and torturing a third, decapitated Chucky in some remote cabin. Each Chucky (and there are others) seems to share Charles Lee Ray's snarky attitude and bottomless appetite for murder, making him a slow, inefficient killing machine now capable of multitasking, at least.

The film is at its best when playing a game of Will the Real Chucky Please Stand Up? both on screen and with viewers. Having several Chuckys all acting in homicidal harmony needs something like the toy-factory climax of Child's Play 2, with its rows upon rows of sealed Good Guy dolls, if it's going to sufficiently geek the audience. At this intimate, direct-to-video scale, the half-bakedness of the idea is stark. (Where's the debate among three of the same notoriously ego-driven serial killer over which one's in charge? There's no way Chucky wouldn't be alpha-dogging himself.) Cult of Chucky overpromises, starting with a title that conjures images of Jim Jones and Kool-Aid, not a spartan hospital ward where nobody's really devoted to Chucky per se.* Mancini's screenplay lacks industriousness, as if budgetary constraints sapped his ambition at the outset. The violence is where he's at his most ingenious, which is probably as it should be, though it gets so baroque--at one point, Chucky shoots a canister of compressed air through a skylight, causing shards of glass to rain down on the female victim shackled to the surgical table below--that the picture comes to feel more like a frustrated episode of Mancini's own late, lamented "Hannibal" than like a Chucky movie. (While we're on the subject, an operating theatre with a skylight is a total "Hannibal" move as well.) I realize I started out by saying the Chucky movies keep changing form, yet for all their extremes that kind of goth grandeur is incongruously kinky. There's a startling moment--even more startling than, though not unrelated to, Chucky having meat inside his body now--where Nica's pervert doctor gives her foot a tiny sniff. It made me realize how little these films have to do with the flesh despite treating people like bloodbags to puncture.

The in-jokes and homages pick up steam again in Cult of Chucky. One Flew Over the Cuckoo's Nest (for which Brad Dourif was Oscar-nominated) and "Hannibal" itself are referenced, Tiffany can't remember if she's actually Jennifer Tilly, and Brian De Palma serves as the obvious inspiration for a split-screen sequence and multiple uses of the split dioptre. Mancini's endgame appears to be another Seed of Chucky, only this time we'll have been inoculated to it by these small, accumulating doses of meta. But as I sat there admiring some staggeringly beautiful close-ups of Chucky (courtesy DP Michael Marshall, who shot Curse of Chucky in addition to "Hannibal"'s series finale), I started to simultaneously resent the artist for not training his eye on something new, like Jesse Pinkman getting frustrated over Georgia O'Keeffe's door paintings. I have Chucky fatigue, and I'd be surprised if Mancini didn't as well; it's revealing, maybe, that with the sixth instalment he stopped telling the story from Chucky's P.O.V., making these films no longer about an alter ego but rather an inescapable phenomenon. Indeed, a "curse." I suspect we're all on the hook for at least one more, though, what with Cult of Chucky's open ending setting up a promisingly skewed take on Thelma & Louise. Maybe Chucky can finally drive off that cliff instead of hanging on to one between sequels. 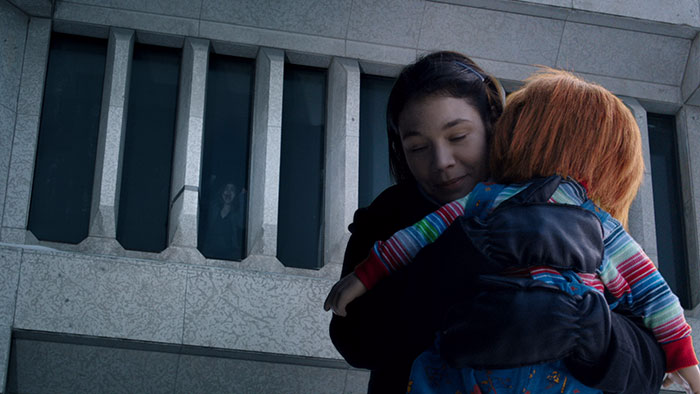 THE BLU-RAY DISC
On Blu-ray, Cult of Chucky has the same hyperclean, televisual glaze as its immediate predecessor. With its antiseptic environs, however, the new film is better suited to digital aesthetics than the gothic trappings of Curse. And though the 1.78:1, 1080p transfer again has its share of blown-out whites (perhaps a by-product of the shallow contrasts favoured by Mancini and Marshall), with everything having a Modernist, Apple-store gleam they don't draw attention to themselves. Although the long-lens photography tends to flatten the image, textures and artisanal details on Chucky himself impress, while occasional source noise is for the most part unobtrusive. Colour-wise, this is nearly a black-and-white film, and the primary hues of Chucky--particularly his shock of red hair--juxtapose boldly, almost violently, against the muted flesh tones. The attendant 5.1 DTS-HD MA track delivers plenty of jolt (an early jump-scare put a spring in my cat's step) and thoughtful rear-channel ambience that helps open up the claustrophobic setting. A thunderstorm set-piece is a sonic highlight, however unlikely that type of weather is in the snowy dead of winter. Note that the disc includes seamlessly-branched R- and unrated versions of the film. As with Curse, some additional gore and a post-credits stinger account for the latter's 53-seconds-longer running time.

Supplements are relatively lite for a Chucky sequel. Mancini and Chucky engineer Tony Gardner reunite for a nigh jolly feature-length audio commentary that finds Mancini reflecting on being "lost in the corridors of [his] own mind" on the versatile but disorienting sets. The two are quick to acknowledge their collaborators (Gardner cites the work of individual puppeteers, a few of whom were local to the Winnipeg production) and frequently recollect ideas that never made it past the screenplay stage, although Mancini doesn't want to say too much about his original concept for Cult of Chucky's big finish in case it's something they revisit down the line. For what it's worth, Joseph LoDuca's score comes in for some last-minute, well-deserved praise.

Video-based extras begin with a 6-minute block of Deleted Scenes that provide Carlos the shading he lacks in the movie proper, along with a couple of nice moments for actress Ali Tataryn, who gets a chance to establish her Nurse Ashley as a voice of empathy in opposition to the Ratched archetype. Restoring these would've enriched the film's interpersonal dynamics considerably. Maybe they don't amount to much in terms of moving the story forward, but arguably all the best horrors are self-indulgent hang-out movies. Next, "Inside the Insanity of Cult of Chucky" (7 mins., HD) is a promotional featurette in the guise of a making-of, complete with a lot of "fans can expect"s and teasers for the major kills. "Good Guy Gone Bad: The Incarnations of Chucky" (5 mins., HD) short-changes an early discussion of Chucky's metamorphosis over the years (a clip from Child's Play 2 suggests his skin used to be dramatically darker) to focus on the intricacies of assembling, programming, and operating Chucky. Last but not least, "The Dollhouse" (8 mins., HD) is a warm if abbreviated documentary on the extended Chucky family--Mancini, Gardner, the Dourifs, producer David Kirschner--that Gardner's daughter Kyra apparently made for school. "I still need you," Fiona reassures her father when he casually volunteers that she doesn't. It's incredibly sweet; may they act together face-to-face someday. Startup trailers for Dead Again in Tombstone, Death Race: Beyond Anarchy, and Atomic Blonde round out the Universal platter, which is packaged with bonus DVD and digital copies of Cult of Chucky. 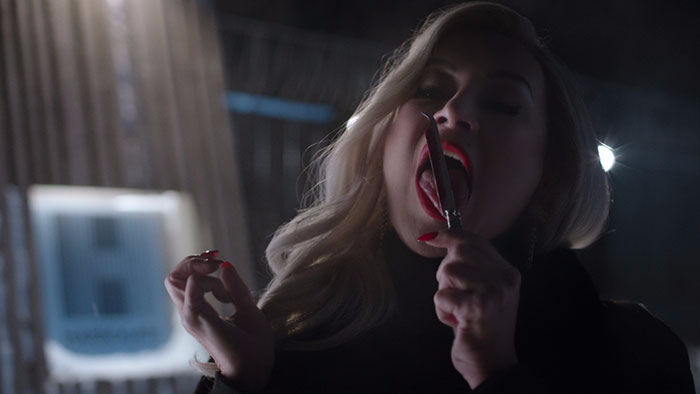 *I suppose the more accurate "League of Chucky" doesn't have that alliterative kick the franchise is going for these days.