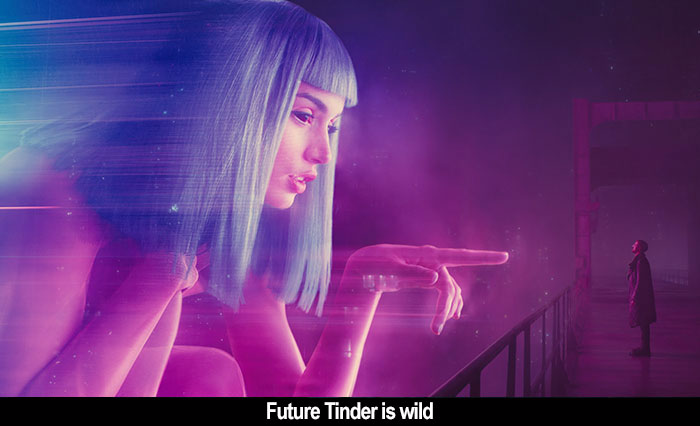 by Walter Chaw Denis Villeneuve's Blade Runner 2049 is oblique without inspiring contemplation, less a blank slate or a Rorschach than an expository nullity. It's opaque. There are ideas here that are interesting and inspired by the original film and Philip K. Dick source material, but they've all been worked through in better and countless iterations also inspired by the original film and Philip K. Dick. The best sequel to Blade Runner is Mamoru Oshii's Ghost in the Shell 2: Innocence, with a long sidelong glance at Under the Skin, perhaps--and Her, too. All three films are referenced in Blade Runner 2049 without their relative freshness or, what is it, yearning? There aren't any questions left for Villeneuve's picture, really, just cosmological, existential kōans of the kind thrown around 101 courses taught by favourite professors and at late-night coffee shops and whiskey bars. Yet as that, and only that, Blade Runner 2049 is effective, even brilliant. It's a tremendous adaptation of a Kafka novel (a couple of them), about individuals without an identity in tension against a faceless system intent on keeping it that way. It has echoes of I Am Legend in the suggestion that the future doesn't belong to Man, as well as echoes of Spielberg's A.I. and its intimate autopsy of human connection and love, but it lacks their sense of discovery, of surprise, ultimately of pathos. This is a film about whimpers.

For fans, the biggest question it gets at is whether the 1982 film's Deckard (Harrison Ford) is a replicant (i.e., a synthetic replica of a human so uncanny that it has traversed the proverbial valley, even to itself), and its lack of interest in the answer speaks to the first problem of Blade Runner 2049. Where Blade Runner, and better films than this, ask questions without asking them, much less offering direct answers to them, Blade Runner 2049 asks, answers, discusses the answer, and provides the best philosophical means through which to process the conversation. It doesn't leave much to comb through. It is 2010 to 2001, its Dave Bowman, Deckard, returning from the obelisk with the answer so no one needs to leave the cinema feeling like there are rabbit holes to chase. It's a film about proximate reality that will only frustrate the most obtuse. I think that's a rather significant problem. It's a Blade Runner for people who didn't like Blade Runner. The enduring fascination of Blade Runner is that its conversation about reality and identity is an endless, Ouroborosian thing. When chasing the brutal replicant Leon (Brion James), Deckard uncovers a drawer full of photographs of other peoples' lives. When interrogating replicant Rachael (Sean Young), with whom Deckard eventually falls in love, he learns that she's been implanted with memories of a spider hatching a legion of her murderers--her maker's niece's memories, it turns out, and the atrocity of that ripples through and around the film. It's an abomination, a violation executed in the pursuit of creating a more docile, and imminently disposable, worker class. Blade Runner is speculative fiction at its pinnacle, whereas Blade Runner 2049 is German Surrealism in all its violent contradiction, true surrealism, surprising moments of humour, and mordant introspection. It's about the disease of the post-millennium.

Blade Runner 2049 doesn't have very much in its underneath; it's a simulacra of something vibrant. Compare the crowded streets of Blade Runner to the arid, abandoned environments of this sequel. The hero is K (Ryan Gosling), self-consciously named after the hero of Kafka's The Castle and later dubbed "Joe" by his suffocating, oppressively affectionate girlfriend, Joi (Ana de Armas), so that now he is named "Joe K" (after the hero of Kafka's The Trial). K is a replicant who works as a Blade Runner, a member of the police force specializing in "retiring" rogue replicants. Kafka's death left The Castle unfinished, which lends it metatextual poignancy as it's essentially about the frustration of an individual before a senseless, opaque bureaucracy as he tries and fails to gain entrance into the titular castle. (Kafka wrote a parable about a gatekeeper that trod similar ground. He likes similar ground.) Kafka's hero is a land-surveyor, and much of Villeneuve's film is a rapturous consideration of ace DP Roger Deakins's desaturated--denatured, really--landscapes, inspired by dust storms and blight. Blade Runner 2049's K is an obedient tool of another arbitrary, obtuse organizational principle. An opening crawl says that K's generation of replicants are known for how they don't rebel and do what they're told. The only need for Blade Runners is to retire the older models without such behavioural modifications. K has memories, like Rachael. Unlike Rachael, he knows that his memories are implanted to make him docile. He's fine with that. He is not unlike you or me, bombarded with information and filled with false narratives, incomplete histories, and prejudiced notions of ourselves as heroes of our own stories. We know it's a lie, too--most of it. We're fine with it, too. I mean, what choice do we have?

Kafka's The Trial is another technically-incomplete work; Kafka never finished any of his novels. In The Trial, Josef K is accused of some crime (neither he nor the reader is ever told what), undergoes a maddening trial of arbitrary logic, and then gets stabbed to death. His last words are an observation that he has been treated "like a dog." Blade Runner 2049's Joe K likewise undergoes trials of increasing absurdity, culminating--SPOILER--in his being stabbed by Luv (Sylvia Hoeks), the chief replicant/aide de camp of blind replicant manufacturer Wallace (Jared Leto), who uses a fleet of small, stone-shaped cameras as his eyes. (END SPOILER.) Wallace wants what K's boss Lt. Joshi (Robin Wright) wants: to find a particular replicant who represents the end of the human race, perhaps, or the key to a perpetually-respawning slave class, or a metaphor for the impossibility to contain created beings with things like incept dates and notions of psycho-social control. Along the way, Joe K talks to a memory architect, Dr. Stelline (Carla Juri), born with an immune deficiency that has left her a prisoner in a glass box but given her the gift of creating the emotional pastiches that define memory--especially distant ones. I love the visit with Chu (James Hong) in Blade Runner, the scientist who fabricates eyes for replicants, because it suggests an entire working class of subcontractors involved in the production of these sentient beings. Dr. Stelline is a fascination because her job is in the manufacture of hiraeth. She has experienced almost none of the things she evokes for others. She strikes at the image of the pornographic playing card in an Edward Albee play, begging the question of whether eroticism arises from a child's first encounter with pornography, or if pornography holds its charge because of an innate eroticism. She is either the creator or a conduit. She is the most Blade Runner thing about the movie.

K eventually meets Deckard, who has oublietted himself away in an abandoned casino with a dog as his only companion. "Is he real?" K asks. In this universe, there are no animals left. "I don't know. Why don't you ask it?" Deckard says. It's a laugh line, but it's also an exchange Kafka would have written, dogged in its desire to frustrate clear communication. There's an amazing scene where Deckard turns on the broken-down hologram program in a theatre and Elvis and Marilyn appear, glitching in their prime as two things (one thing?) fight(s) between them, in a moment that made me believe a feature adaptation of Clive Barker's "Son of Celluloid" was not just possible, but possibly good. Blade Runner 2049 is as pure a work of Modernism as "The Wasteland", a collection of curated nostalgia (Frank Sinatra dominates the soundtrack, in the same way that John Denver has dominated this year's films)--including building-sized Atari logos, a callback to the strangely-bad predictive futurism of the first film (almost all of the companies showcased therein subsequently went under)--that is the very evocation of Eliot's "fragments" shored against the poet's ruins. They are "bad" memories of a child of the Eighties, or bad fantasies, or maybe there's no such thing as qualifications attached to things like that. It is emotionally distant by design, I think, an exercise in alienation, as is appropriate in a film where the hero believes himself to be an "it," briefly dreams himself to be a "he," and resigns himself in the end as a tool in someone else's story. Which he is.

I didn't like Blade Runner 2049 very much in the hours after first watching it. I didn't like the way it resolved the previous film's storylines--how stolid it was in its exposition and how eager it seemed to talk about what was on its mind. It's an easy film to dislike. But through that initial dislike I started wondering if maybe its obviousness is its point. Approaching it as one of Kafka's parables, the height of simplicity, reveals a workable deconstruction. It comes complete with Kafka's father/son intrigues (see "Das Urteil" and "The Metamorphosis"), the metaphysical search for God, the struggle against malevolent Law, the neurotic heroes in active conspiracy with their troubles to create more troubles. It deals with the problem of masculine creation--Frankenstein, obviously, but also Kafka's own horror at his work and his unsuccessful entreaties upon his death that it all be destroyed. In a central scene, Wallace interrogates one of his "angels," freshly-birthed from a sack (Sallie Harmsen), and finds her wanting. She's not able to procreate, it seems. Wallace can't properly be God until he can produce something that procreates independently. The desperation with which poets like Byron and Shelley wanted their words to sow viable seeds speaks to the insufficiency of Man in the creative enterprise. Not for nothing does replicant Roy Batty (Rutger Hauer) quote fellow Romanticist William Blake in the original film. In not asking Blade Runner 2049 to be another Blade Runner, it becomes interesting, full, a piece worthy of discussion with a personality and mind of its own. In determining that the reason I didn't like it was that it was not a good sequel to Blade Runner, or at least not the one I was expecting, it suddenly became a great sequel to Blade Runner. I'm seeing it again, you know, after I reread these Kafkas. Updated: October 6, 2017.