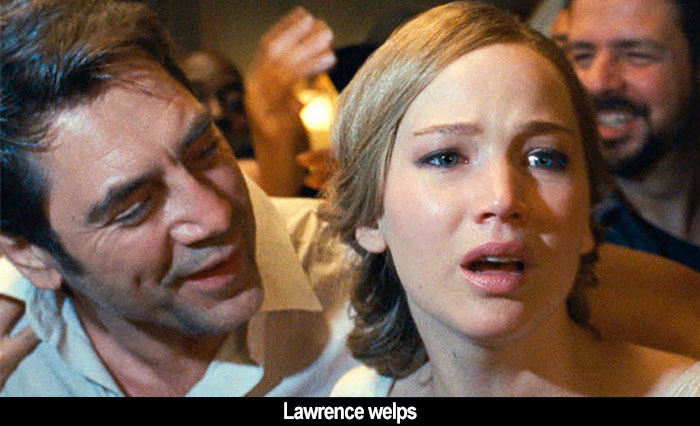 by Walter Chaw Darren Aronofsky's mother! seeks to explain the ways of God to Man in an allegory of the monstrousness of the creative impulse that plays at once as apologia and barbaric yawp-cum-mission statement; imagine if Aronofsky adapted Paradise Lost. It's The Giving Tree and Harlan Ellison's "Try a Dull Knife" as told by Buñuel and Ken Russell: a marriage of essential truth with exceptional excess--a work of genuine arrogance and pretension. The picture aspires to answer large questions, to lay bare the heart of the artist, and it has as few apologies to offer as it does fucks to give. It's unpleasant to the point of unwatchability--an instant entry into the films maudit hall of fame, predicting a popular failure and critical evisceration that are at least in part something Aronofsky must have expected, given how dedicated mother! is to destroying pleasure, to refusing the breast that its unnamed female protagonist (we'll call her X, in honour of Joan Fontaine's similarly anonymous heroine from Rebecca), played by Jennifer Lawrence, offers her infant in one of the multifarious religious tableaux that litter the piece. In fact, were the film a river to be crossed, the stones you'd step on would all be depictions of holy martyrs and Madonnas. In this way, it resembles Children of Men--even through to its long urban war and siege sequence, which mother! replicates during its feverish conclusion. It resembles Viridiana, of course, and The Exterminating Angel. It resembles all the great symbolist films because it's one of them.

The Poet (Javier Bardem) and his wife live in a huge, circular mansion made ramshackle by a fire and in the process of renovation by, it seems, X and only X. She restores the home while The Poet writes. But he's blocked. Then a lost surgeon (Ed Harris) knocks on the door. He's looking for a bed and breakfast, but has found this place. The Poet is delighted to learn that the surgeon is an ardent admirer of The Poet's work. He invites him to stay the night, then invites him to stay for as long as he likes. X requests that the surgeon not smoke in the house. She asks her husband why she was not consulted before the offer of shelter was given. They all think she's being silly. Another knock and the surgeon's wife (Michelle Pfeiffer) arrives. Perhaps this is Eden. God, The Poet, has created Adam through his Word. Then Eve arrives. Then Cain and Abel, their sons (real-life siblings Brian and Domhnall Gleeson), who are also unnamed in the film, and of course Eve wants to talk to X about sex and issues of good and evil, and of course one of the sons rises up and kills the other. But then who is X in this scenario, if not the feminine element eternal? She's the ground from which things grow. In the final analysis, she's Faith, perhaps, the blind devotion that any god needs to exist--unquestioning, unconditional love. Ultimately, The Poet tells X that he's sorry, but she's not enough and never will be.

mother!, then, is another of Aronofsky's examinations of the Meaning of it All. It's his manifesto to the people who have loved him and love him still that they will only ever be secondary to the fire of creation in which he burns. He wouldn't have it any other way despite leaving corpses and cinder litter in his wake. The film is angry even as it's confessional, and what I find so very bracing about it is that Aronofsky doesn't seem to care about how people perceive him so long as the product of his hands finds its way into the collective bloodstream. Indeed, it's something of a miracle that a film like mother! was ever allowed to be made, much less released widely, in an industry that has become popular and easy to deride for its lack of imagination. There is a toilet clogged with something that looks like...what? A heart? It bleats when it bleeds and escapes into the pipes. There's a child who becomes the centrepiece in an act of communion, identifying the watching of a film as the same kind of ritualistic cannibalism as the Christian Mass. mother! has a link in this way to Paul Schrader's First Reformed in the notion that although it's in God's nature to forgive, will He? The Poet, for his part and for what it's worth, does.

Shooting on film in Super16, Aronofsky and longtime DP Matthew Libatique stay in close on X throughout in a style I most readily equate with the Dardennes. It's her anxiety and increasing sense of displacement with which we identify. We're enraged by The Poet's dismissal of her concerns, and shocked by his selfishness in the face of her increasing anxiety. At the same time, when The Poet shows her consideration, we receive it as she does: with relief and gratitude. mother!'s style is bulwark to its substance--the intense identification we feel is that of the righteous. When X asks a steady flood of her husband's admirers to respect their space, to not sit on the sink, to not use their bedroom for a liaison, we identify completely with her feelings of invasion. We are protective of her baby. We care about her hardwoods and the wall she's painting so carefully with just the right shade of pale green. We, like X, want this house and The Poet to ourselves, but The Poet needs the adoration of his faithful to thrive. He is the cult band we've always liked and are now watching gain massive popularity.

Aronofsky frames the journey of the artist as a microcosm of human ambition: the explosions that give rise to creation even as they devastate it. A vaginal hole opens up in the floor of the nursery. When X listens to the walls, we see an image of a heart, at first healthy, steadily turning black. This is Aronofsky talking about how the same impulse that pushes men to acts of grace pushes them to acts of violence unto atrocity. The creation of a poem is no less a miracle than the creation of a child in the eyes of a man; the creation of religion in the breast of man is another way men conspire to touch infinity. And at the end, it's X who makes it possible. The feminine element, given to the fire. mother! is elemental in its ferocity. It is every bit the movie Buñuel would make were he still alive. When they screened his L'Age d'or--another film to which mother! owes a deep thematic and visual debt--the first time, the audience threw ink at the screen and rioted. Buñuel's film ends with a crucifix decorated with women's scalps. mother!, dangerous by most any measure, is tame by comparison. You should see it.