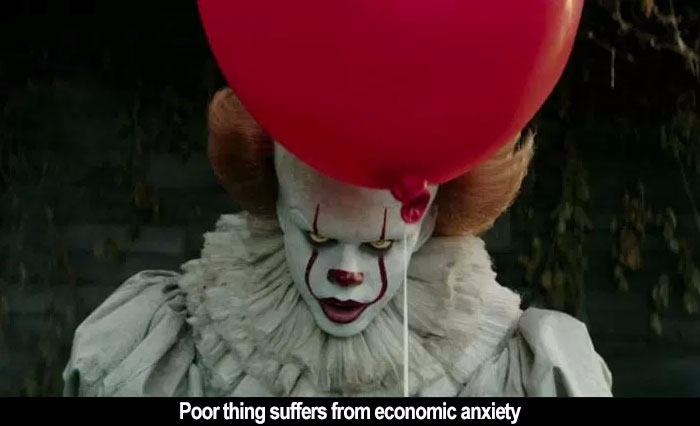 by Walter Chaw There's a girl, Beverly (Sophia Lillis), she must be around thirteen or so, she's standing in front of a wall of tampons at the drugstore, trying to make a decision on her own because her dad (Stephen Bogaert) is alone, and a creep, you know, a little scary in how he keeps asking her if she's still his "little girl." So she has to do this by herself, even though it's embarrassing--but she's doing it. The next aisle over, a few boys, they call themselves "The Losers" because why not, everyone else does, are gathering medical supplies to help the new kid, Ben (Jeremy Ray Taylor), who's been cut up pretty bad by bully Henry (Nicholas Hamilton). They need a distraction because they don't have enough money to pay, so Bevvie provides one, and now she's a "Loser," too. I read Stephen King's It in September of 1986, when I was thirteen. Thirteen exactly the age of its heroes in the "past" of the book, the flashback portion that's paralleled with the kids, as adults, called back to the Derry, ME of their youth, where they had forgotten that, once upon a time, they fought a thing and won. There is nothing better when you're thirteen than Stephen King. It was my favourite book for a while, although I didn't entirely understand why. I think I might now. Better, I believe Andy Muschietti, director of the underestimated Mama, and his team of three screenwriters, Chase Palmer, Cary Fukunaga, and Gary Dauberman, understand that what works about It isn't the monster, but the fear of childhood as it metastasizes into the fear of adulthood--and how those two things are maybe not so different after all.

Muschietti's It is the first of at least two planned films: this one dealing with the kids and the second, presumably, finding them twenty-seven years on, called back by a blood pact to re-live the worst, and best, summer of their childhood. The leader is Bill (Jaeden Lieberher), who has a stutter just bad enough to cause the bullies to pick on him. I had a stutter all the way through elementary school. It was crippling. I couldn't speak. One day in sixth grade, two years before I read It, after a very particular event, it disappeared. There's a moment in It where Bill delivers a speech and his friend Richie (Finn Wolfhard) notices that Bill hasn't stuttered once during its delivery. It's not nothing. The film is made of these little not-nothings, like when Ben, the fat kid, watches sadly as Bill and Bevvie have a private conversation. He's standing in a hall, bag of trash in his hand, and he sees them through a doorway, their heads tilted towards each other. Ben's written Bevvie a poem, you see, on a postcard he got from the library, where he spends all his time. Bevvie hopes that Bill's written it. Ben hopes that Bevvie could love him, but he understands some things about the world already, that it's cruel to difference and weakness. Besides, Bill's his friend. He's a good guy. It's an extraordinary scene, tender and true. I love when sickly Eddie (Jack Dylan Grazer) gets his arm broken and the surly teen at the pharmacy notices that no one has signed his cast. She signs it. What she signs and how he tries to change it is melancholy and kind of beautiful for how observant it is.

I remember when reading the novel marvelling at how strong Bevvie was as a character and then being surprised at how meek she was with her father. She was a hero to me, but she was only thirteen. This It gets that, too. Bevvie hears voices coming out of her sink at home. When she looks into the drain, gouts of blood erupt from it, plastering the room, soaking her. Her dad doesn't see it. Children have dreams sometimes of needing help and their parents don't respond. It remembers this. I think it's fascinating that Bevvie tries to measure the depth of the drain with a tape measure--and succeeds. It's the sort of thing that only works in dream logic: the nightmare of a pipe in your house that goes straight down into an abyss. It's fascinating, too, that the first thing that attacks her is her own hair, recently lopped in a fit of self-loathing after her father's made her feel...off. And then the blood, of course, drops of it following her around as a reminder that the thing she perceives to be at the root of her problems is puberty. It's possible to unpack this film. It's not Bruno Bettelheim, but it captures King's gift for easy characterization along with some of the book's extraordinary developmental subtext. The best adaptations understand the whole of an author's work. It's true of the Coens' True Grit and No Country for Old Men. It's true of Muschietti's It, as well.

The children, see, are being hunted by a monster who feeds on their fear. From the perspective of being a dad now, myself, I think their worst fear isn't a clown called Pennywise (Bill Skarsgård), but that their parents can't save them, aren't listening to them, are themselves imperfect at best and broken at worst. The grown-ups in It are crippled by their grief, their own fears of abandonment, which causes them to focus the wrong kind of attention on their children and pass on their humiliation and terror. We never meet Bill's mom. We assume she's too grief-stricken by the loss of her younger son, Georgie (Jackson Robert Scott), to deign to speak to her surviving boy. We do glimpse her for a second, though, in a slide that captures her with hair covering her face. Then the slides start whipping by, like animation, and before we know it, she's morphed into Pennywise. Rabbi Uris (Ari Cohen), father of young Stan (Wyatt Oleff), has a terrifying painting in his office that Stan has come to equate with his father's disappointment; Eddie's mom (Mollie Jane Atkinson) is Munchausen-by-proxying Eddie to death. These kids are on their own. All kids are on their own, sooner or later, and sooner than anyone really wants. I like how a sad-eyed parent staples a "missing" poster to a lamppost and, later, the kids discover it's obscured a missing poster for another kid. Children go missing all the time. They become lost adults.

I love this movie. I know it's not perfect, but I love it. Its monster is a metaphor, but it's also something grotesque and ridiculous, practical and CGI. It's a clown, so it capers. Pennywise is an It, so it unfolds itself from a refrigerator and expands to fill an entire garage. Its mouth is like a penguin's mouth, it collects children like a bird lining its nest, and when It leaves, its last word is "fear." It's an exaggeration, which is appropriate, and it's as pathetic as anything that preys on or exists because of another's weakness. It is timely in that way, presenting an idea that any ideology founded on fear is cancerous, monstrous, doomed to fail in the face of the courage of a united front. There's optimism in this tale of child-murder and cycles of atrocity. That's the wonder of it, that even after all the terrible, incomprehensible things, there's optimism yet in the choices and actions of the weakest of us. It is a horror story in the traditional sense. There are jump-scares, but the picture doesn't rely on them; there's a little gore, but it doesn't rely on that, either. The motor that drives It is the dread that there's no safety net: that the world is chaos and the only bridge keeping us above it is the ties we use to bind us. In the next film, I hope we get to see this creative team explore how those ties reach out from the past to provide us a roadmap into the future. I can't wait.