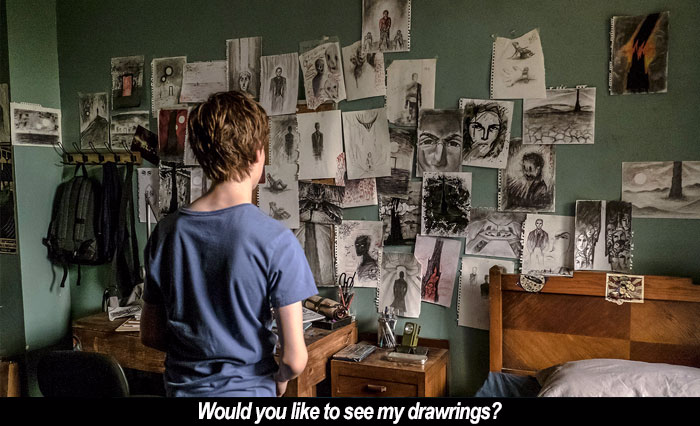 by Walter Chaw If I cared or knew one thing about Stephen King's revered Dark Tower series, I'd probably really hate this movie in exactly the same way I initially hated Francis Lawrence's Constantine. I was a devotee of the Vertigo sub-line of DC comics through the early-'90s--the one that produced titles like Neil Gaiman's "The Sandman", Jamie Delano's "Animal Man", Grant Morrison's "Doom Patrol", and Delano/Garth Ennis's "Hellblazer", which of course formed the basis for Lawrence's picture. But I don't. Care about The Dark Tower, that is. For all that King once meant to me as a kid, it and The Stand were two of his epics I could never get into. I missed the window on Tolkien, too. And in not caring and in my complete ignorance, I like Nikolaj Arcel's The Dark Tower about as much as I like Constantine now, not needing the four or five years to come to terms with how it doesn't jibe with images and rhythms I'd conjured in my jealous nerd-dom. (I maintain, however, that if they were going to make Constantine a Yank, they should've cast Denis Leary.) In The Dark Tower, the main hero is a kid named Jake (Tom Taylor) who, one day, discovers that all those crazy dreams he's been having, which have led to all those creepy-kid drawings plastering his bedroom walls, are TRUE. Why won't you listen to Jake, adults? Obviously modelled after the kid in Last Action Hero, Jake dreams of a dark tower that is not Idris Elba that is under attack by the evil Man in Black, who is not Johnny Cash but is named Walter and is played by Matthew McConaughey. My favourite moment in the film is when Walter shows up in Jake's parents' kitchen, frying something on the stove, explaining apologetically that where he's from, there's no chicken.

What there is, though, is a terrible Montessori concept from which abducted children are harvested periodically to be strapped into chairs, where their "shine" is focused into a beam of light to destroy the dark tower--an actual tower, not Idris Elba, who is a metaphorical dark tower. (Or is the tower the metaphor? I get confused.) For King devotees, or even neophytes who know the bare minimum about pop culture from the past forty years, "shine" is probably the same thing little Danny Torrance has in The Shining that causes him to animate a resort hotel of horrors over the worst winter break ever. It's not clear what happens to the kids after they get strapped into the chair, and that's a problem because what if they're fine? What if they're just tired, you know, or have a bit of a headache that a couple of over-the-counter analgesics could remedy? Without knowing whether the children are turned into yawping death skeletons or, as the film does to a couple of people, smoking piles of black ash, it's hard to be too concerned when Walter finds Jake and sends his minions--hairy rodent things that wear skin suits--through a "Sliders" portal to bring him to Walter's evil laboratory. The biggest revelations for me about The Dark Tower are that it's not only squeamish about violence but also apparently young-adult fiction aimed at mildly-precocious children. Maybe that's more the influence of pandering nitwit Akiva Goldsman, who deserves some time in the screaming chair for being a part of a few of the most culturally destructive artifacts of the last couple decades. He's the worst.

The Dark Tower is not, in fact, the worst. It's pretty bad, but it's also impossible to hate a movie that has Idris Elba dressed like Wyatt Earp, walking through New York and telling trollops they have "forgotten the faces of [their] fathers." It's like Thor in that way, or Last Action Hero again, or "Voyagers", that old TV series that was also about anachronisms and fish-out-of-water comedy. Taylor is fantastic in a thankless role as the kid in what is essentially the traditionally-awkward pilot for one of those series Showtime puts on to compete for the attention HBO is getting. Thus lots of scenes where Walter's hench-things, such as dead-eyed Tirana (Abbey Lee), talk about how Jake's "shine" is off the charts and how they've tracked him to "Keystone Earth," which, being from Colorado, only means to me that he's at a ski resort that's also pretty nice to visit in the summertime. I think what they're actually saying is that the portals lead to alternate realities and that the dark tower (not Idris...never mind) is the hub. This does not explain why Walter is a warlock or why Roland (Idris Elba) is the last in a line of gunslingers tasked with protecting the Dark Tower or why there are also Stargates and hellmouths, but that, I have to assume, is all part of the magic of The Dark Tower. Someone should someday write an essay on how King wants to be Tolkien, resulting in about sixty pounds of paper that could have been devoted to good books instead, though that someone is not me.

The final shootout between the gunslinger and the guy who can catch bullets with his fingers, awright awright awright, is a little like the Cloud City duel between Luke and Darth if Luke were black and had a gun and Darth were on pot and had perfect hair. Walter uses the Force to throw debris at Roland and Roland loads his guns in really cool ways--like catching the bullets Walter is throwing back at him in the chambers of his revolvers, because bullets once fired are not reusable but shut up, okay? Did I mention that the guns are made out of what used to be Excalibur? Because that's a thing, too. The Dark Tower is a mess of loose ends and missed opportunities, pulled on the one side to be a faithful adaptation of a beloved property and on the other by the need to be something that inaugurates, while we're on the subject of Holy Grails, a new Cinematic Universe. The few moments that it's free to be itself reveal a sly sense of humour (like when Roland gravely intones that no one knows what "these ruins" once were and Jake reiterates that they were an amusement park--it's "Futurama" humour but "Futurama" is brilliant), and there are signs of life gifted it by the magnetic Elba, who desperately needs a better agent and soon, and the very promising Taylor, who deserves to be the Next Big Thing. It's a failure, but how big of one is entirely predicated on your level of investment in the material. If you don't know anything about it, take it from me, it's, without a question, 100% meh. Now It, on the other hand, It better be exactly how I want it to be; and why isn't the lead kid Chinese?