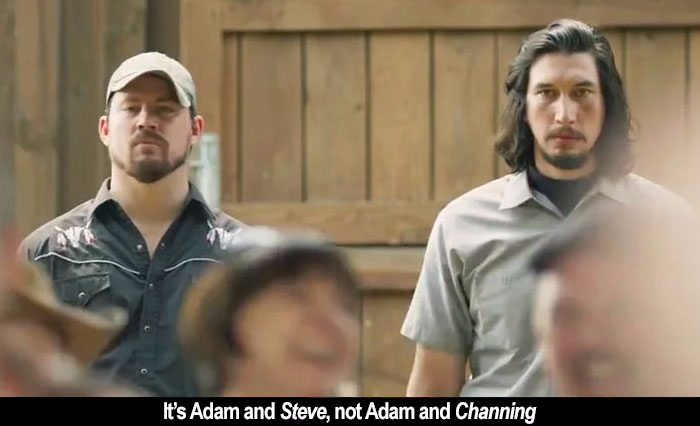 by Angelo Muredda Steven Soderbergh returns from a self-imposed retirement of all of four years with Logan Lucky, a heist movie so steeped in its maker's creative and commercial history that it casually makes time in its climactic moments for a newscaster to dub its working-class heroes' shenanigans "Ocean's 7/11." Begging to be read as an unnecessary but enjoyable victory lap from a filmmaker who hasn't gone away so much as temporarily opted out of the rat race of alternating between formalist exercises, crowd-pleasers, and prestige pictures, Logan Lucky sees Soderbergh working in his most amiable register--and for the most part doffing his aesthetic predilection for piss-yellow lighting--while still cycling through his pet interests of late. A polymath by nature, as evidenced by his annual viewing logs, Soderbergh more or less successfully wields Logan Lucky into a charming sampler platter of his tastes, from hitting genre story beats faithfully to realizing the smallest procedural details and celebrating sincere Americana while bemoaning its toxic corporatization.

Soderbergh's proletariat avatar of choice Channing Tatum stars as Jimmy Logan, a construction worker unceremoniously dismissed from his job at the Charlotte Motor Speedway on account of his barely-hidden limp, which foreman Jim O'Heir (suggesting a more malevolent version of "Parks and Recreation"'s useless paper-pusher Jerry) deems a liability. Faced with the prospect of his more or less estranged wife (Katie Holmes) upping and moving their daughter (Farrah Mackenzie) to slightly greener pastures, Jimmy realizes he needs cash fast if he wants to stay in his family's orbit. His labour used up and discarded by a company that makes more than its fair share through its ties to that grand American pastime of NASCAR, Jimmy recruits his amputee war-veteran brother, Clyde (Adam Driver), and salon-running sister Mellie (Riley Keough), as well as family friend and demolitions expert Joe Bang (Daniel Craig, channelling Harvey Keitel from The Grand Budapest Hotel), in a grand plot to rob the Speedway during the Coca-Cola 600 on Memorial Day weekend.

The winking structural nods to Ocean's Eleven package Logan Lucky as a kind of blue-collar poster negative of Soderbergh's most commercially-friendly films, as rough-hewn and country-infused as its predecessors were sleek and nimble, their tempo set by David Holmes's electronic-jazz fusion. His attention to pick-up trucks, flags, baseball caps, and John Denver-filled CD booklets--the visual signifiers of the West Virginia milieu in which the unlucky Logans were bred--positions the film closer to the poor San Bernardino residents of Erin Brockovich than to the bespoke-suited grifters of the Ocean's movies. Still, it's Soderbergh's wonk-like interest in the systems one has to navigate and subvert in order to pull off a heist like this that makes the film seem like such pleasantly familiar territory.

Although the quasi-mythical title sets up the heist as a piece of contemporary American folklore about NASCAR- loving and pillaging Robin Hoods, the film is arguably more invested in the minutiae of how to run (and, more compellingly, how to shut down) a major sporting arena that trades in national mythos than it is in the brothers' redemption arc about taking something back from the company and the country that left them both physically disabled. Soderbergh's roving camera leaves the Logans for long stretches to explore the elaborate tube systems that comprise the Speedway's economic circulatory system, pausing at one point for an interlude that could serve as an instruction video on the correct procedure for maintaining a concession stand when smoke is coming through the vents. The sprawling cast likewise allows him to cover a good amount of disparate geographic territory within the heist grounds, even following a team of security guards through the catacomb-like parking garages as they slowly piece together the major players' plot.

There's something exhilarating about the way this larger movie-star family drama is put on the same level as the rigorous everyday work of cleaners, cashiers, drivers, guards, and prison rioters for hire, though the film strikes a vaguely disingenuous note in the way it too easily rewards their anonymous labour through--spoiler alert--a series of discreet cash donations from the working-class robbers to everyone who helped out, whether deliberately or unwittingly. The same aura of well-meaning condescension wafts through a strange talent-show set-piece where Jimmy's daughter, dressed up as a white Virginian Rihanna about to perform "Umbrella" (in a possible nod to the Magic Mike trailer's use of "We Found Love"), changes plans at the last second to deliver a cover of John Denver's "Take Me Home, Country Roads." Soderbergh surely wants us to simultaneously take in the authenticity of the performance and the impromptu audience sing-along it inspires (not to mention the patent artificially of her hair extensions and makeup, bathed under garish purple stage lights), but if this is a larger comment on how institutions like NASCAR curdle real American values into commodities, it's a muddled one at best.

Aesthetically and intellectually varied though Soderbergh's pivots from heist ephemera to these moments of cultural anthropology can be, they risk overshadowing the cast--especially under-utilized side players like Keough--in what is ostensibly a character drama about wage workers getting theirs after years of getting their hands dirty for someone else's profit. The peculiarly restless plotting ramps up in the planning stages of the heist, then becomes impressionistic and vague as everything is subsumed to the grand system of the Speedway, a many-limbed beast that struggles, for all its apparent efficiency on an average day, to put out a hundred fires when it counts. Yet despite any shortcomings, it's hard to seriously gripe about a film as playful, low-key experimental, and earnest as Logan Lucky, which is as curious and genially undisciplined as its maker.