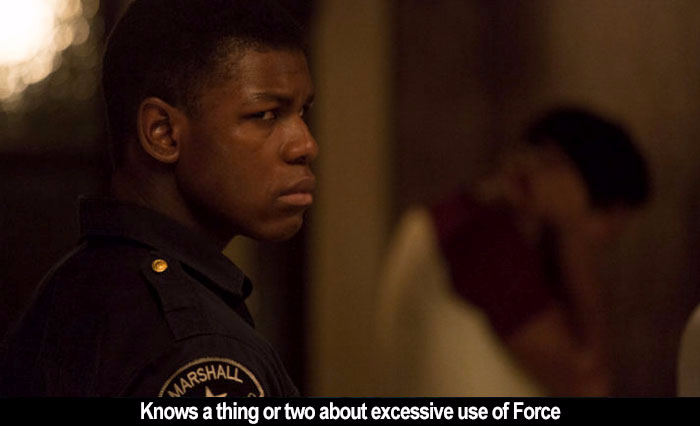 by Alex Jackson Kathryn Bigelow's Detroit is painfully afraid of controversy. It's as though Bigelow and screenwriter Mark Boal were given the assignment to make a film about the 1967 Algiers Motel incident and cringed their way through it, trying their best to alienate neither black nor white audiences. Hilariously, the end result has now become one of the most controversial films of the year. An essay by Jeanne Theoharis, Say Burgin, and Mary Phillips (a trio of academics in political science, history, and African American studies, respectively) recently published on the HUFFINGTON POST denounced it as "the most irresponsible and dangerous movie of the year." Angelica Jade Bastien of ROGEREBERT.COM states that she left the theatre in tears, not because of the violence so much as the "emptiness" behind the violence. And, of course, Armond White had to get his licks in, concluding, "Watching black people being brutalized seems to satisfy some warped liberal need to feel sorry." Looks like I was wrong! Black film critics, at least, seem to fucking hate this movie.

Digging into these essays, it appears there may not be a significant disconnect between my response and theirs. I can tell that we all saw the same movie. Maybe it's the film's effort to not be off-putting that is precisely what is so off-putting. When a filmmaker isn't really putting their heart and soul into material like this, when they don't have a tangible stake in it, something may go a little rotten and lead us to experience a bit of that emotion Bastien characterizes as "emptiness." Still, this sky-is-falling emotional outrage strikes me as a tad hyperbolic and even myopic. Detroit is not a great film, but it's not racist. It doesn't trivialize recent history, nor does it necessarily "fetishize violence on black bodies" or "deny black life," as reported by Theoharis, et al. Reading some of this stuff, I began to wonder if anybody in the room had ever sat through Jacopetti and Prosperi's 1971 Goodbye Uncle Tom.

I don't see Detroit as a film made for a white audience (although again it doesn't want to alienate the white audience, either). I'm not going to summarize the plot in great detail, but essentially it's based on what occurred at the Algiers Motel during Detroit's 12th Street Riot in June of 1967. The riot itself had been ignited by a police raid on an unlicensed club celebrating the return of black war veterans. Governor George Romney had sent out the National Guard and emotions were running high. From inside the Algiers, somebody fired out at the troops with a starter pistol as a joke. In response to this perceived sniper attack, the police raided the motel intent on finding the shooter. The sequence recreating this raid, with the police psychologically torturing and murdering their suspects, constitutes the centrepiece of the film.

Essentially, I think if Detroit were made for a white audience, we never would have known about the starter pistol. When I picture a film that legitimately alienates a black audience by conforming to a white perspective, I suppose that I really am picturing a war movie not unlike Bigelow and Boal's previous collaborations, The Hurt Locker and Zero Dark Thirty. These are legitimately great films, much better than Detroit incidentally, yet because they fall within the war genre it might be overly easy for us to accept how thoroughly they dehumanize people of colour. Although the Americans in these movies are not particularly saintly and the Iraqis are not particularly evil, because the Americans look and talk like us and the Iraqis don't we intuitively take the American side and regard the Iraqis a bit like the bugs in Paul Verhoeven's Starship Troopers. The blinkered perspective shared by The Hurt Locker and Zero Dark Thirty, where we only know what the Americans know and have no idea what's happening on the other side, neatly conforms to the moral limitations of the war genre and is great for tension and suspense. But, by design, it of course lacks inclusivity.

So I give Detroit some credit for not being a war movie. (That said, if they could actually pull off such a thing a more interesting film might have resulted.) If there were a Bechdel test for people of colour, I have a feeling Detroit would pass it. I don't see the black characters--portrayed by a terrific cast that includes John Boyega, Anthony Mackie, and Jason Mitchell--as lacking a sense of community or existing only to suffer at the hands of racist white cops. I definitely got the sense that they exist outside a white perspective. They have a past and a future--a trajectory of sorts--that is interrupted by the blitz on the Algiers. There are two young white girls (Hannah Murray and Kaitlyn Dever) staying at the motel, and this becomes a major plot point during the raid. The film strikes a nice balance by making their interaction with the young black men in the motel neither decidedly salacious nor asexual; race is neither ignored nor made a point of ("fetishized"). It's normal. It's OK. No specific political point is being made about any of this until it's imposed, externally, by the police.

What annoyed me is how Bigelow and Boal work to offset any potential anti-white racism by giving us lots of White People Who Care. It's patronizing. Will Poulter plays a young cop who is the villain of the piece. Curiously, much of the first act is spent developing and validating his point of view, showing us that he has reasons for doing what he does and that he is, in some ways, even an idealist. In his very first scene, he laments how he let "them" (the police) let the community down by not doing more to quell the riot. Once we reach the Algiers set-piece and its subsequent aftermath, we begin to view him in more caricatured terms as sadistic and cowardly--but by then the damage is done. The filmmakers have added complexity where none was really warranted.

One of those "white people who care" is Poulter's commanding officer (Darren Goldstein), who fails to remove him from active duty when he shoots a looter in the back, only to help initiate an investigation following the Algiers incident that results in formal charges and a trial. According to the HUFFINGTON POST piece, this is historically inaccurate in minimizing the role of the people's tribunal. It also undercuts the fatalism of the officers' eventual acquittal and, possibly worse, it artificially simplifies the Algiers raid as an outlier event that can be attributed to "a few bad apples."

Detroit does have some valid and substantial insights into Black Lives Matter. There's a key moment where the looter Poulter shoots refuses to go to the hospital because he doesn't want any ambulance or police called. The scene illustrates a core idea in Stephen Pinker's The Better Angels of Our Nature: that violence in the inner city is pronounced due to the "civilizing process" having failed to take hold. There is an absence of a Leviathan or a strong central government. This doesn't mean that inner-city violence is attributable to the police not cracking enough heads--it means that violence is the result of justice not being administered consistently or impartially. If you kill my brother, I'm not going to call the police and have it investigated because they probably don't care, aren't going to put any effort into the case, could potentially even arrest me for something stupid. And so I need to take the law into my own hands. The argument against Black Lives Matter is that the people who need to hear that message aren't the police, but other black people. What this fails to understand is that police brutality is a contributor to black-on-black violence precisely because if you learn to fear the police, you will no longer trust them to serve and protect. Yet while I see this concept as very much present throughout Detroit, it's ultimately obscured by a need to provide the white audience with positive white characters.

More than the film's broad characterizations, whitewashing of history, or lack of perceived political content, what has clearly perturbed the authors cited at the beginning of this review is the Algiers sequence proper. They suggest that seeing black men beaten, killed, and humiliated by white cops is especially hurtful and painful for black filmgoers and not something that would register for white audiences. I actually did find myself enjoying the middle of the film quite a bit, largely because I like a good slow burn. The closest thing I can compare it to is the "hogs of the road" sequence in Tom Ford's Nocturnal Animals, much of Lars Von Trier's Dogville, or Gregory Wilson's The Girl Next Door. Those movies are about sexual torture, and I suppose there must be sexual undertones in Detroit's Algiers sequence and I'm guessing it's the emasculation of the black male, in particular, that is so taboo.

With all four of these films, however, the sexual torture is a masochistic experience rather than a sadistic one, and I feel that's an incredibly important distinction. The victim is not an object, but a subject with whom we identify. I certainly didn't experience pity for the black characters during the Algiers raid, but more importantly I didn't feel any embarrassment or shame towards seeing whites commit these atrocities. My point of identification was directly with the black characters, and I was vicariously experiencing their suffering. I'm sure that this may read to some as racial tourism, that it's the embodiment of white privilege to be black for a couple of hours and then go home, but I'm not sure where the line is between that and valuing and believing in the empathic process. Personally, I believe Nocturnal Animals, Dogville, and The Girl Next Door all serve pretty well as anti-rape statements. As idealistic and uncool as it may sound, portions of Detroit could serve a similar function. I mean, otherwise, what's the point of going to the movies?