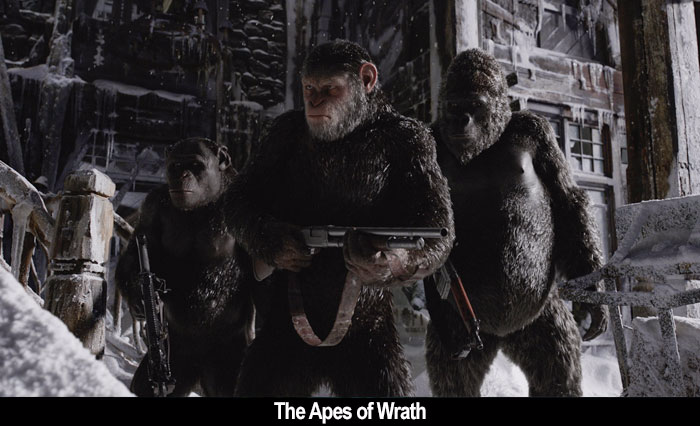 by Walter Chaw There are two problems that plague War for the Planet of the Apes. The first is that this far along into a franchise, it becomes a real burden to deal with the lore of eight (is it eight?) previous instalments; the second is that Rise... and Dawn of the Planet of the Apes, this sequel's two immediate predecessors, are so subtle and intelligent that there's a real danger now of being too "on the nose" in trying to keep up with them. That co-writer/director Matt Reeves is able to wrangle both tigers to the extent that he does speaks to his skill. That he's not able to entirely avoid a mauling speaks to the near-impossibility of the task. What was before an elegant parable of race and tribalism, dehumanization and Turing empathy tests, is now well and truly a blockbuster franchise product. It's good, don't get me wrong, but it's obvious, transitioning from a very fine, elegiac western like a late Ford or an any-time Anthony Mann into, by the end, first a broad and winking take on Apocalypse Now, then a carefully-narrated Moses allegory. Consider a moment where the ersatz Kurtz, The Colonel (Woody Harrelson), speaks to our chimp hero Caesar (a motion-captured Andy Serkis) about the cost of vengeance and the sacrifices made during war that allow him to paint himself as Abraham even as he transitions into Pharaoh. Everyone's fantastic in the scene; the problem is that its expository payload is mainly meant to set up the Charlton Heston film that started it all. Too, it confuses the characters of its parables in such a way as to suggest, uncomfortably, a connection between Jews and their persecutors, and a concentration camp/Egyptian slave narrative involving the persecution of apes for cheap labour only adds to the confusion. Oh, also, they're building a wall that Caesar calls "madness" that will solve nothing.

It's swinging broadly and for the fences, War for the Planet of the Apes. And the same things I didn't want to be troubled by in The Dark Knight Rises I'm again troubled by after years of self-serious pictures. It's an exercise in outrage fatigue in its way, or at least the product of it. The movie may be smart, but it's not smart enough to hide it. It wouldn't surprise me if it's the most lauded of the new trilogy, because it's the least sticky--the easiest one to parse for social relevance: It's really only about how the quality of mercy is not strained, except that it's strained quite a bit and ultimately futile besides. Caesar demonstrates a great deal of mercy in the film and he's punished for it, soundly and repeatedly. The Colonel doesn't demonstrate any kind of mercy and, same. It doesn't matter. In the end, War for the Planet of the Apes delivers the message--driven home during a slapstick deus ex machina that seals the deal in Eliot's blanket of forgetful snow--that there's no hope, for anyone or anything, ever. The state of man and ape is fallen. It's a bit of miserabilist thinking in the middle of a dark period and therefore not entirely in vain, you know--it's contemporary and all that. But there is a point at which all the sorrow comes down to garbage like how the little girl gets her name, and how that name is one that's going to be very familiar to fans of the Heston original--and not for particularly noble reasons.

For the neophyte, War for the Planet of the Apes is the third entry in a saga detailing how a virus intended to cure dementia ends up wiping out most of mankind while simultaneously increasing the intellectual capacity of apes. As the movie opens, Caesar and his troupe are hidden away in the woods, but the humans are getting closer. There's been a war for years. Both sides have suffered heavy casualties. Caesar makes the decision to move, perhaps across a desert--perhaps the desert featured in the 1968 film. Then terrible things happen, and betrayal, and deaths of lieutenants and family members, until Caesar self-identifies as consumed by rage and vengeance and dangerous to his people as a result. It's Cheyenne Autumn and The Great Escape and Roots, kind of, then it's Stalag 17 and Apocalypse Now ("Ape-pocalyse Now!" the film jokes) and finally The Ten Commandments after passing one more time through Monument Valley, in case you missed the nods to Ford. Did you miss them? Let's go over it again. Plus there are crucifixions, in case you miss the Bible stuff. Did you miss it? That's okay, I have all day.

I let out a visceral trill of delight every time I saw an ape on horseback. It's an unbelievably cool image. If this concludes Reeves's run with the series, deficiencies aside, it'll stand as one of the good ones. The harsh irony is that it's also proof that no matter how skilled or shrewd the execution (late in the picture, a close consideration of one of the saddles the apes have fashioned reveals the level of care that's gone into the details), it's almost impossible to avoid the traps of franchise filmmaking if you make it to a third episode. For the first time, there seems a profound anxiety that it'll be misunderstood somehow. In the process of pulling things to the surface, the filmmakers leave nothing in the underneath. That's how it works. Caesar loses everything, so he goes to kill the person responsible. Then he discovers he has more to lose. Afraid to alienate its audience, War for the Planet of the Apes underestimates its audience. Though laudable for its embrace of darkness, the new trilogy errs by cultivating smart, engaged champions only to toss softballs at its conclusion. Yes, building a wall is stupid. Yes, I've seen Apocalypse Now a lot and laughed knowingly when The Colonel shaved his head before his adoring throngs at his secluded hideout. I tried really hard to extract some sort of message about the human child (Amiah Miller) and her integration into the ape culture--but I know what happens to her and I don't think War for the Planet of the Apes thought it through beyond the opportunity to plant a cool in-reference for the fans. Yeah. I got it.