Valerian and the City of a Thousand Planets (2017) 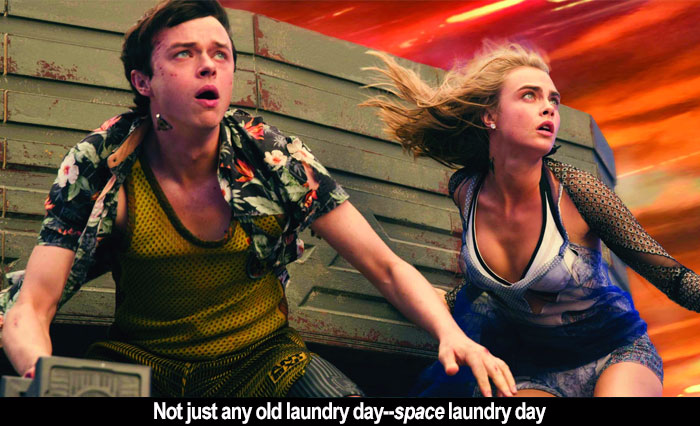 by Walter Chaw Effortlessly, almost guilelessly sexist in the way that only a 12-year-old with lacklustre breeding can be, Luc Besson's latest opus of antsy expressionism, Valerian and the City of a Thousand Planets (hereafter Valerian), is so relentlessly puerile, so unapologetically awful, that there's absolutely no chance it won't become a midnight masterpiece. Not one of the good ones, like Besson's own The Fifth Element or The Professional (or The Messenger, curiously the most historically accurate Joan of Arc film), but one of the ones that are the feature-length equivalent of that repetitive noise your 9-year-old son makes when you're driving him to a friend's house. It's an interminable adaptation of the Ruby Rhod sequence from The Fifth Element, an endurance test of unusual cruelty and imagination. If you're sensing some grudging admiration for it, you're not wrong. It's like going to a torture museum and marvelling at the level of invention and craftsmanship dedicated to the methods to which humans go to discomfit one another. Some of that sadistic shit is worth millions--priceless, even.

Valerian also cost millions. It's obvious. You don't design a screensaver this Byzantine without expending a lot of bones. The prologue is fantastic, tracking the guests to the International Space Station from, first, all nations of Earth, to various nations from the universe--a clever, hopeful montage (set to David Bowie's "Space Oddity," of course). Then the ISS is unmoored from Earth's gravity, becoming the titular City of a Thousand Planets--sort of a Casablanca of the galaxy. 500 years pass in chyron time, and then there's a genuinely stupid interlude on a beach-resort planet populated by tall, nubile alien things who feed pearls to a little animal that dutifully shits out hundreds of other pearls. Their culture is predicated around this shit harvest. The little animal becomes the MacGuffin of the piece later after this Club Planet is destroyed, because it's the last of its species. It's a neat trick being the MacGuffin of something that doesn't have a plot, really--it's like being the legend for a map that is a blank piece of paper. Anyway, much of the multiverse is interested in obtaining the pearl pooper, leading space spies Valerian (Dane DeHaan) and his partner Laureline (Cara Delevingne)--who look so much like siblings that it lends the whole romantic subplot an illicit porn-niche thrill--to do a lot of space spy stuff. Loudly, and with mucho gusto. Some of it with Laureline wearing underwear, and later with her wearing a sexy wedding dress, and then space armour with giant metal boobs. Also, there's a shapeshifting hooker named Bubble (Rihanna) who has been learning how to be a space hooker since she was four. At some point, Rihanna should stop accepting roles as sex victims, but I'm not her manager and she can make her own decisions. Whatever, I don't really care.

I did vaguely care that Clive Owen, John Goodman's voice, Ethan Hawke, and Rutger Hauer are in Valerian, because it destabilizes my worldview in an entirely unpleasant way. What's it like? It's sort of like coming home and seeing my kids flying around the ceiling like hummingbirds. No--it's like having a dream about a test and I'm not wearing any pants and it's my father. Anyway, it's not pleasant, and it's disorienting enough to be somewhat nauseating. Valerian, you see, is possessed, kind of, by the spirit of a dead princess nubile thing, making him the tiniest bit curious about the pearl-shitter he's tasked with recovering. Recover it he does, and in the course of doing his job he uncovers a plot by evil Commander Filitt (Owen) to hide his obliteration of native peoples. Yes, Valerian is either a stealth sequel to Avatar that no one wanted (I'm guessing, since no one wants actual sequels to Avatar), or it's a stealth remake of Cheyenne Autumn except the Cheyenne are lissom cabana aliens who have built the mechanism through which... Oh, Jesus, look: Valerian is Seizure: The Movie, a cinematic fidget spinner that will get a lot of praise for being busy and bright and less attention for being as horrifically- written and plotted as Calvinball. Kids who haven't seen movies will like it a lot.

For me, I'd consider that the main tension of the picture is whether or not our womanizing space Bond will delete his playlist and make Laureline the only track on his new one. "Playlist" refers to the list of girls he fucks, by the way. Cool stuff! Laureline, late in the game, spunkily asserts herself by sending Valerian off to get backup for a change because she's actualized, you see? This is after they fight about how she's not a very good driver. I did like the scene underwater where a pirate, named Bob the Pirate (Alain Chabat), helps them catch a giant jellyfish whose ass Laureline will shove her head up, marking the rhythm of Valerian as alternating vertiginously between something that's sort of a neat idea and something involving poop or a five-minute burlesque show featuring Rihanna in various fetish outfits. It's a Luc Besson joint, through and through. A triumph of the idea that an artist should create what an artist wants without interference. He shares this astonishing freedom with very few artists in the history of art--Thomas Kinkade and Nagel, for instance. You know, the greats.