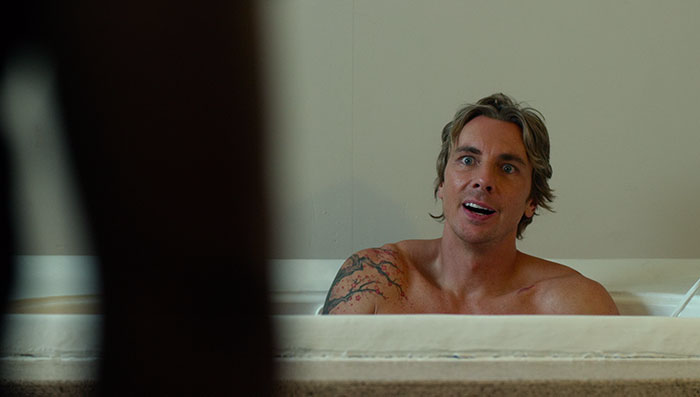 by Bill Chambers I can't say I was surprised to see another movie based on a television series flop when CHIPS failed to earn back its meagre $25 million budget last spring. 21 Jump Street is the only recent one that's stuck, and that had star power behind it, as well as a stubborn presence in pop culture thanks to Johnny Depp. Plus--and this is important--it was good. CHIPS is driven by career supporting actors, and, like Baywatch after it, perhaps, is based on a show that people remember like the candy of their childhood: wistfully, but with reflex revulsion. And unlike when, say, The Flintstones came out (1994, the heyday of the TV-to-film adaptation), there's no rerun culture cultivating "new" fans of "CHiPS". If the title still produces a look of recognition in younger viewers, it's probably as a synecdoche for cop shows the way that "Gunsmoke" and "Bonanza" are synonymous with westerns. The specifics--was there a guy named Porch or Punch or something?--have long since evaporated from the collective conscious. Such is the fate of most pre-prestige television in the age of cord-cutting and so-called "YouTube stars," but studios today lack the courage to be originators, preferring even the elusive clothing of a brand's ghost to sending a movie out into the world naked.

CHIPS is also--and this important--not good, at least not in any traditional sense. Though he's probably persona non grata at Warner Bros. right now*, the choice of Dax Shepard to, er, shepherd the film into production has a certain logic and integrity to it, regardless of whether his low cost and tractability were major factors in his hiring. As a feature-length Smokey and the Bandit homage, Hit & Run, the last film Shepard wrote, directed, and starred in, showed him to be on "CHiPS"' wavelength and proved he was a conscientious stunt coordinator as the owner of many of the vehicles used therein; and of course there was that storyline on "Parenthood" about his character getting a motorcycle, which felt like the show bowing to his nascent auteurism. (According to WIKIPEDIA, Shepard also "races motorcycles at Buttonwillow Raceway, including his Ducati Hypermotard 1100S and Suzuki GSX-R1000.") Hit & Run, which Shepard co-helmed with David Palmer (who appears to have abandoned the movies for advertising), sees Shepard and then-girlfriend/now-wife Kristen Bell caricaturing themselves as a new couple hitting speedbumps literal and figurative on a cross-country car chase. Much of the picture draws from their life together but allegorizes it, turning, for instance, Shepard's past issues with drugs and alcohol into a criminal history. (A cast of showbiz friends meanwhile includes Tom Arnold, who was Shepard's AA sponsor.) The film's couplespeak is particularly credible and its various supporting characters all speak with a degree of authenticity, though their philosophical digressions are pure Tarantino logorrhea.

CHIPS likewise boasts many a conversational tangent and rehashes Hit & Run's endless debates about what constitutes homophobia. It's clearly a preoccupation for the Let's Go to Prison star, who isn't just feigning wokeness to sanction dismayingly tried-and-true gay-panic jokes like so many of his peers do (although a close-up of crotch contact during a locker-room hug plays to the cheap seats). Indeed, CHIPS is unmistakably a personal film, too, and in the sense that it finds Shepard using every excuse to play "Hot Wheels" with real automobiles it's also a faithful adaptation of a series that was rarely much more than a pretext for staging freeway smash-ups. (For those unfamiliar with the premise of "CHiPS", the title is an acronym for "California Highway Patrol"--and that's all you need to know.) But an absence of autobiographical touchstones in the material seems to send Shepard on a wild goose chase for the humanity in the archetypes that anchored the show, hothead patrolman Frank Llewellyn "Ponch" Poncherello and his by-the-book partner Jon Andrew Baker, who are reinvented as an undercover FBI agent and a former daredevil, respectively. Maybe Jon isn't a womanizer like his partner because he's faithful to a wife (Bell again) who checked out of their marriage long ago? Maybe Ponch has a silly name because it's a pseudonym? In a way, despite the Laurel and Hardy visual dynamic of Shepard (Jon) and co-star Michael Peña (Ponch), they cancel each other out here. Both characters are larded with personality quirks--Ponch is obsessed with yoga pants, for instance, while the smell of other peoples' homes makes Jon nauseous--but lack an essential contrast. They're like dual Manic Pixie Dreamgirls competing for no one's attention.

Both characters are also unrepentant addicts, with Ponch being a sexaholic and Jon hooked on painkillers because he's a human crash-test dummy. Shepard commits to this with a discussion of Jon's erratic pooping schedule and a jarringly quotidian sequence where Jon, practically paralyzed while waiting for drugs to lubricate his joints, seeks Ponch's assistance getting into the tub, after which they shoot the shit with Jon in the bath. Truly, the film's dedication to comic and dramatic verisimilitude--rogue-cop villain Kurtz (Vincent D'Onofrio, essaying another volatile hulk) is primarily motivated to stick up armoured cars by a desire to get his strung-out son (Justin Chatwin), Jon's former rival on the motocross circuit, out of California and away from heroin--is admirable but produces the kind of tonal clashes antecedents like 48Hrs. and Freebie and the Bean were careful to avoid, and the incursions of slapstick and TV action devices like crashes that end in explosions further muddy the waters. Still, I think this might be a feature, not a bug. Shepard is no Larry Gelbart and when CHIPS tries to be conventionally jokey it's hardly a laugh riot (Maya Rudolph's early cameo notwithstanding), yet a mid-film set-piece is checkered with gallows humour--think Ridley Scott's The Counselor--that really lands. Suddenly, the whole film starts to look more like a kamikaze mission, and becomes morbidly funny for following its own curious muse, to the confusion of "CHiPS" fans, "CHiPS" newbies, comedy lovers, action-comedy lovers, the Jump Street holdovers...pretty much everybody. Not for nothing did Shepard get his start on "Punk'd". Me, I found Pauline Kael's review of Pee-Wee's Big Adventure echoing in my ears: "I liked the movie's unimportance. It isn't saying anything." 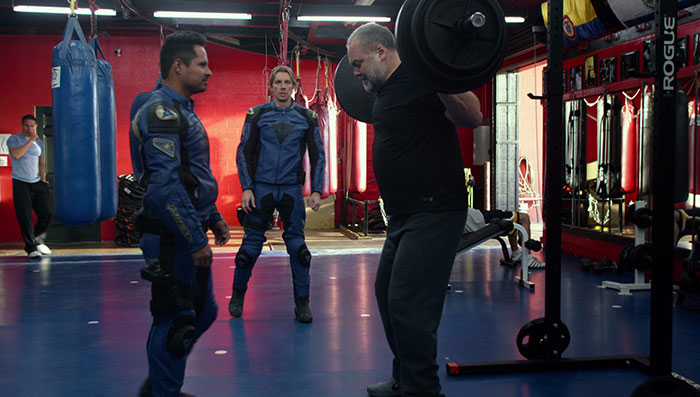 THE BLU-RAY DISC
DP Mitch Amundsen (Transformers, Premium Rush) shot CHIPS digitally with either the Red Weapon or the Red Epic Dragon Carbon, conflicting reports say. Of the two, the Weapon allegedly boasts superior dynamic range, but that's not going to matter much when crunching the image down for SDR viewing at home. Neither especially glossy nor expensive-looking, the film fits comfortably on the small screen, styled in a modern (read: sleek) equivalent of the "CHiPS" aesthetic with the same flat interiors and magic-hour exteriors--the hyperbole of the latter betraying Michael Bay's influence on Amundsen. While the 1.78:1, 1080p transfer can appear oversaturated, one can't say it doesn't pop. Black level vacillates between slightly washed-out and rich bordering on crushed, though shadow detail is consistently good. A top-flight action mix and a vanilla comedy mix live in harmony on the accompanying 5.1 DTS-HD MA track. Gunshots have nice reverb and the panning effects (both left to right and front to rear) during the centrepiece motorcycle chase sound almost like Dolby Atmos in their transparency. The default volume is set fairly high.

You may wonder how a movie that feels like a collection of deleted scenes could possibly have anything left on the cutting-room floor. Alas, a 10-minute block of ten HD outtakes, complete with video intros from Shepard, proves otherwise. Ponch jerking off in a gas-station bathroom is seen rather than implied, Jon graduates from the Academy on screen, and Kurtz receives some shading. At one point, he's given a full-body scan that shows him to be the same mess of screws and rods as Jon and his son, which is not uninteresting (the motorcycle's tariff on the human body remains a fascinatingly unexamined motif), and there's a genuinely unsettling bit where he pulls a guy over for texting and refuses to be bowed by the camera-phone shoved in his face. Shepard cut it because it was intended to be the prologue and started the movie on too dark a note. I'm sad to see it go, for a variety of sociological reasons but also because it's vintage D'Onofrio. The other extras are three HiDef featurettes--"This Is Not Your Dad's CHIPS" (9 mins.), "Practical Pursuit" (9 mins.), and "Ducati: The Perfect Bike" (5 mins.)--in which the disc's de facto host Shepard shills for his vision and his favourite toy. He calls the movie "an excuse to do something with motorcycles and cars," then goes on to say he was motivated to do a "cool, tough version of ["CHiPS"]." I may doubt his commitment to Sparkle Motion, but he's very likable in these segments, and I believe wife Bell when she chimes in that he always has his antennae up. Moreover, I'm pretty sure his waxing poetic on the sound Ducatis make turned me momentarily gay. HD trailers for the 2017 King Arthur, Dunkirk, and the videogame "Middle-Earth: Shadow of War" round out the platter. DVD and downloadable copies of the film are included with a purchase. 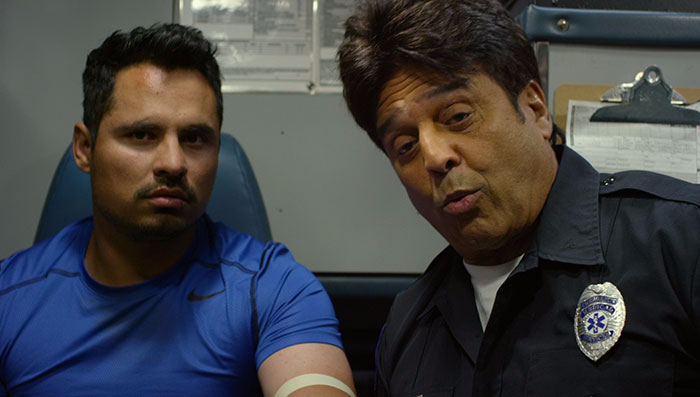 *Not to let the hideous marketing campaign--pathetic even by Warner's intro-to-Photoshop standards (I mean, that tagline alone ("Chip Happens"))--off the hook.