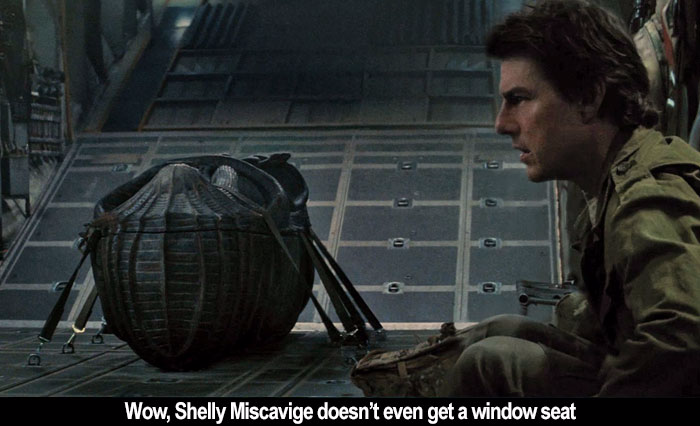 by Walter Chaw It took me a while but it finally clicked about an hour into Alex Kurtzman's hilarible The Mummy that the whole thing wasn't a really bad movie, but a really bad videogame in bad-movie form. It has the same alternating cadence of leaden exposition drop, interminable and hideously- animated/performed cut-scene, and standard FPS-strictured gameplay culminating in a boss fight. Envisioned as the launch for Universal's "Dark Universe" franchise (in which the pantheon of classic Universal Monsters are given gritty action reboots, League of Extraordinary Gentlemen-style), it finally functions as a first-generation "Resident Evil" port in which the dialogue, for what it's worth, was written in Japanese, translated into English, and performed by 64 pixels stacked on top of each other. Awkward doesn't begin to describe the desperation with which all involved try to seductively reveal/hide their Dark Universe™ Easter eggs while hobbling from one big, button-geeking, CGI-hobbled moment to the next. Look, behind those dust zombies: it's Dr. Frankenstein's lab!

Consider the second set-piece (the first being a weird battle set in Iraq): a plane crash in the desert, one that recalls identical scenes in any number of films and videogames (particularly the third "Uncharted"--or is it the fourth?) and ends with rakish adventurer Nick (Tom Cruise) saving blonde-bombshell Egyptologist-with-a-secret Jenny (Annabelle Wallis) from certain doom. Confusingly- shot and edited, it sets up Nick waking up in the morgue to the urgent counselling of his invisible-to-everyone-but-him friend Vail (the Oscar Isaac you can afford, Jake Johnson), the zombified and decomposing buddy who will jauntily lead Nick to the first boss battle against the suddenly reanimated Ahmanet (Sofia Boutella), who, back in olden times, agreed with Egyptian Black Phillip, Set, that she wouldst like to live deliciously. Nick will escape, have a boss battle with Mr. Hyde (Russell Crowe--who I guarantee you took this role because Spencer Tracy once played it), do the underwater level against the knights from Indiana Jones and the Last Crusade, and then face Ahmanet again before the cliffhanger setting up downloadable content or a sequel somewhere down the road. Awful? It's at least awful.

It's also fascinating how retrograde its attitudes are towards the Middle Eastern thugs mutilating antiquities and scattering before drone strikes; how Nick needs to tell Jenny to run away from hordes out of The Living Dead at Manchester Morgue because she's too fucking stupid to do it herself (compare Jenny to the Rebecca Ferguson character in the last Mission: Impossible instalment and weep for us); how in the most disturbing moment of the film, Tom Cruise essentially murders a young woman by smooching her. It's a sequence that should have been Q-Scored carefully and then thought better of. I love Tom Cruise the action-movie star, don't get me wrong. He should never be in a relationship on screen with a young woman--and if he is, there should not be a part where he kisses and literally sucks the life out of her. It's a little bit on the nose. For the rest of it, Cruise is game, as is his wont. He runs hard, does his own stunts, probably, and commits to an endeavour that even his detractors recognize is a few bars beneath him. The Mummy, alas, is a good decade past its sell-by date, conspicuous for its lack of ideas and dinosaur politics due to its proximity not only to the Wonder Woman movie but also to a solid few years of women-dominated blockbusters and independents, including Cruise's own superlative Mission: Impossible - Rogue Nation and Edge of Tomorrow. Not to say we've turned a corner, but we've at least turned this one.

Ultimately, The Mummy is a film for apologists that will satisfy no one in particular. It's the movie that isn't as bad as everyone says it is, that wears its references and intentions so sadly on its sleeve that the feelings it elicits are of general pity and occasional indulgence. I liked the scenes where Nick is punching zombies--Lifeforce is another touchstone, by the way--so hard that his fist is going through them, especially an ambulance flight where the damned things keep appearing on the hood. I liked, too, how much Vail was doing Griffin Dunne in his attempts to cajole his buddy to "break the curse." The rest is the stuff you put down the controller for to go urinate or get something from the fridge. It's not a complete disaster (I'd argue that no film with Tom Cruise ever is), but if Cruise is our Jackie Chan, then The Mummy is his Operation Condor.