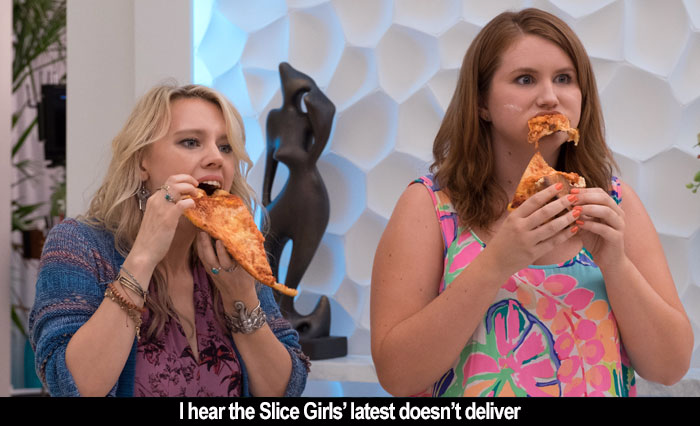 by Walter Chaw Going by the trailers, I thought Lucia Aniello's Rough Night was going to be a distaff Very Bad Things--which in the grand calculus of things would've been a very good thing. Peter Berg's masterpiece of bad behaviour and karmic vengeance is uncompromising, hilarious, vicious, and at least five or six years ahead of its time. (1998 was not kind to it.) The problem with this genre is essentially Judd Apatow, who, though fitfully funny, infects his pictures and their imitators--of which this is one--with a thick strain of conservative morality. His movies climax in marriage and monogamy and the very restoration of society. Very Bad Things ends with paralysis, death, and half-life; Rough Night ends by excusing everything, making sure everyone is friends and cool and shit, and explaining away why it is that the truly noxious character at the centre of it all is the way she is. Spoiler: it's because her mother is dying of Alzheimer's and she's trying to give her a rosy picture of her...you know what, never mind. Above and beyond any ugliness embedded in the film's premise and execution, the exploitation of this disease for some sort of moral reclamation is the ugliest. It's completely unnecessary. It's noxious.

It's also what makes Rough Night genuinely terrible rather than just run-of-the-mill unwatchable. Imagine The Hangover if it's revealed after everything that the Zach Galifianakis man-child miscreant was acting the way he did because he had sick relatives. It's the kind of thing pictures without any courage do. Rough Night takes a shot at being a Weekend at Bernie's, but garbage decisions like this align it more closely with Patch Adams. Although the picture plays at being naughty, it's as timid and chaste as a church picnic. Jess (Scarlett Johansson, the best, smartest actress in the United States) is running for local office and on the verge of getting married to milquetoast Peter (Paul W. Downs, this generation's Hal Sparks) when her obnoxious, oversexed, normal-bodied college buddy Alice (Jillian Bell, because Rebel Wilson is off doing another Pitch Perfect) drags her away for a wild bachelorette weekend. Along for the ride are the lesbian caricature smelling her pits and scoring blow, Frankie (Ilana Glazer, not a lesbian); the black high-society woman, Blair (Zoë Kravitz); and the hilarious Australian friend, Pippa (Kate McKinnon, cruelly wasted doing the accent, because Rebel Wilson is off doing another Pitch Perfect), leading to the awkward realization that for all the things this movie rips off in its attempts to find a personality and pace, the thing it rips off for its character dynamics is "The Facts of Life". If anything, you empathize most with the stripper, Ryan Cooper, whom our heroes accidentally murder ten minutes into the film. If only.

What follows is these idiots acting like they've never seen an hour of television in the last twenty years, conspiring to hide the body while the next-door neighbours--Will Ferrell and Rachael Dratch's "Hot Tub Lovers" from "Saturday Night Live" recast for the big screen with Ty Burrell and an unrecognizable, didn't-you-used-to-be Demi Moore--do their best to ensnare Blair in a nasty three-way. Hilarious? Not remotely. Rough Night has the glaring earmarks of something workshopped to death by studio instincts that still tend towards the Hay's Code, no matter how many dick props and sex swings on display. Sure sure, it says, do all that nasty stuff, but can't they all be friends, and love each other at the end, and maybe get married to unthreatening men? On a beach? Rough Night is the seed of a subversive idea bent to serve a patriarchal tradition of storytelling and character development. It's Miley Cyrus showing up as a virgin again, unironically, now that she's ready to settle down. The tensions it establishes in the early going between the pathologically lonesome Alice and Pippa, who she sees as a rival? Here's the joke about how they're such good friends now that they're nigh inseparable! The old lovers reunited and resentful of each other's airs and life choices? Now they're together again. No problem. The crime? What crime? They're heroes! There's even a moment where Jess is assured that the office she's running for is guaranteed now; and, oh, the woman the film's been quietly fat-shaming? Yeah, she ends up with a different male stripper.

Rough Night is unbelievably poor. Some of its relentless sloppiness would be forgiven if it were ever funny, but it never is. Neither is there any fluidity to its plotting, which really just feels like one sketch after another stitched together by the barest of pretense. Pointless to pick at something this stupid--better to speculate on its compromise. Rough Night, when it was on the Black List, was probably interested in the relationships between these women and not how funny it is when a horny fat chick kills a stripper by leaping on him. (Fatty Arbuckle, somewhere, weeps.) There's so much potential in this premise, so much opportunity to pick at the hypocrisy of the hell of our culture of cannibalistic one-ups and "gotcha" wokeness. You can see glimpses of that intelligence when Blair is accused of forgetting her blackness, or when Frankie is pinioned for her trust-fund activism. And then it's all gone, buried under a conversation about dating outside your "league," a running gag about how everyone presumes the groom is a gay hooker looking to give and receive blowjobs, and much forced sentimentality that feels suspiciously like an apology for the film's rudeness. I'm pretty sure that isn't what Rough Night set out to accomplish. But who am I to judge?