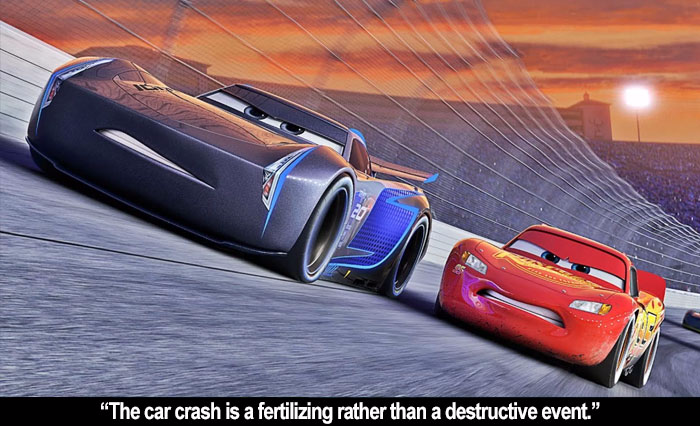 by Walter Chaw I don't understand very much about the Cars universe. I don't understand its rules. Do the sentient cars feel pain? What part of them needs to "die" in order for them to die? The implication is that the voice actor needs to die, but even then the Paul Newman-voiced "Doc" is resurrected (along with Tom Magliozzi's "Rusty") in Cars 3 through the miracle of old voice outtakes and flashback sequences. It raises questions about sentience in a Blade Runner sort of way. It invites speculation that this is all a post-apocalyptic nightmare in which our "smart" cars have either outlasted, or outwitted, their primate creators. I wonder, too, about how they reproduce, as these films have always been clear that there are "children" in this universe. Or are they like child vampires: wizened monsters trapped in infant chassis? When I look at a sentient ambulance in this one's central "Flesh Fair" demolition-derby sequence and how its patient bay is built for a human-sized customer and not a car, well...it raises questions. And let's talk about the idea of a demolition derby in a film populated entirely by thinking, feeling cars. What would the human equivalent to this be? Thunderdome? It's worth a conversation, though it's not the conversation Cars 3 wants to have.

Instead, Cars 3 wants to join the parade of tentpole releases replacing their traditional male heroes with non-traditional female ones. I like that in theory. I liked it in the Star Wars universe, I liked it in Logan. I like it generally and at the same time it's starting to feel rote and familiar. There's a line to this sort of thing and until there are more female creators at the helm, it veers dangerously towards tokenism. It's embedded in Elizabeth Banks's recent kerfuffle in which she "called out" Spielberg for not directing more female-oriented pictures. The better question is why there isn't a female Spielberg. What makes Cars 3 the best in the series so far is that it does better in dealing with questions of race and sexism (and hicksploitation), insofar as it's at least acknowledging that the previous two instalments never had very much luck dealing with these subjects. The backwards denizens of the Flesh Fair are even given some footing, allowed to experience pride when their little burg is mentioned on television, even if they're still the source of sport amongst the hoi polloi. It's minor progress, but progress just the same. Better is a scene where Mater (Larry the Cable Guy) is shown in long shot, illuminated by a computer monitor (why would cars create technology that requires fingers?), completely alone in the middle of a junkyard. It's winsome for its total isolation: He's been jettisoned from the franchise, for the most part, and if he's not aware of it, the movie is. It's subtle character-building when you least suspect it. More of that would've gone a long way.

Alas, Cars 3 is more interested in doing the "overcome your self-doubts" and "you can do whatever you want if you put your mind to it" storyline, with young (?) personal-trainer car Cruz Ramirez (Cristela Alonzo) getting hired by the new owner (Nathan Fillion) of Lightning McQueen (Owen Wilson) to whip the aging legend back into shape. Revolutionary in and of itself to have the star of this picture--one that banks heavily on tie-in merchandising--be a young Latina, Cars 3 goes on to consider mortality and the natural passing of the torch from one generation to the next. There's some fascination to be mined, too, in ancillary characters like Louise (Margo Martindale) and River (Isiah Whitlock Jr.), who hint at the sexism and racism both had to overcome, even as stock caricatures like Cheech Marin's "Ramone" continue to traffic in them. But it's fleeting, and the company that once pushed the envelope in terms of refuting the notion that all men are created equal, and that you should be able to do whatever you want to if you work hard enough, goes back to doing the cultural soft-shoe around those ideas. Pixar earned my undying respect when it made children's films hinging on the philosophy that if everyone is special, no one is. For whatever reason, they've stopped doing that. In the process, they've become just like everyone else. And nothing so very special after all.