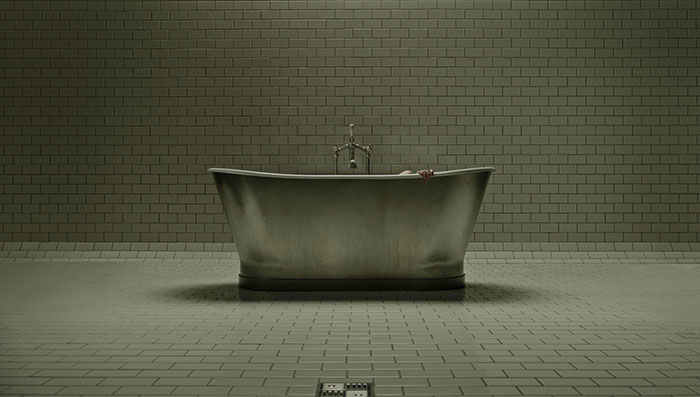 by Walter Chaw Gore Verbinski's A Cure for Wellness is lurid unto beautiful, exquisite pulp, just barmy enough to attract a cult and just smart enough to deserve it. The central conceit is that humans are only really good as biological filters for pollutants; in place of the batteries of The Matrix, the film sees people as distilleries for some sort of immortality potion. The process kills them. I learned when I was young that rabies is a kind of fear of water: its sufferers die of thirst even surrounded by water. The old, rich, white/white-collar victims of A Cure for Wellness entomb themselves in an alpine sanatorium invested in hydrotherapy in hopes of feeling, you know, better. Their sickness is of the soul, alas. The irony of the water cure offered by their ostensible saviours is that the patients become desiccated, mortally. There seems to be a message in there about how the illness of soulless acquisition is self-inflicted, and the amount expended in solution only exacerbates it. Money is bad. The making of it is incestuous, perverse, and insatiable. It's a strange thing to say in a movie that cost a lot of money, but the point is well taken. Especially now.

A pessimistic fairytale for a pessimistic time, its Prince Charming is corrupt, ambitious, fledgling captain of industry Lockhart (Dane DeHaan), sent by a carnivorous board of directors to fetch their vacationing CEO, Pembroke (Harry Groener), from an exclusive Swiss spa renowned for its healing waters. It's not a mission of mercy, it's the desire for a scapegoat to take the heat for a few numbers that don't add up with the SEC at the door. The greatest bit of fantasy in the film is that there are effective regulatory agencies in the United States. Capitalism is our only God--explanation for why 81% of white evangelicals voted Mammon into the White House. Much is made at the outset about how the only residents of this mountaintop Mar-A-Lago are ridiculously wealthy and overwhelmingly Caucasian. The sanatorium/castle is run by charismatic Dr. Volmer (Jason Isaacs), who is so clearly the Dr. Phibes of this arcane endeavour that the only real trick to the thing is figuring out when lissom, amorphous Hannah (Mia Goth), lost from a Tim Burton movie, will discover her true identity as a Shellyan orphan. The facility is built, you see, on the site of an old tragedy where a Baron married his pregnant sister. The townspeople revolted, ripping the fetus from the Baroness and throwing it in an aquifer beneath the castle aswarm with immortal flesh-eating eels. No points for figuring it all out, not just because it's a little bit obvious, but because the solution is beside the point. The cure, follow, is fatal.

At the start of the final third, mad doctor Volmer tells our sojourner Lockhart that the only cure for the venal excesses of mankind is disease. Then he fills Lockhart with eels and turns on a tap to begin harvesting the condensation from his tortured, dilated pores. A Cure for Wellness is that kind of movie. There's a dental scene that recalls the cringe-worthy one from Marathon Man; a menstruation sequence in a pool that recalls not Brian De Palma's skeezy shower-room fantasia, but rather the real horror and revulsion of Kimberly Peirce's Carrie; and a juxtaposition of weird masturbation with Lockhart getting mobbed by eels in a sensory-deprivation tank that should give Jungians a lot of grist. A Cure for Wellness is a finely-tuned discomfort machine, trafficking in images (like a cow suspended in a metal frame, a vet ministering to it with a box cutter) designed to disturb. And for each meticulously-mounted atrocity, Verbinski offers a delirious Masque of Red Death with revellers all in white, spinning like Mevlevi dervishes, providing contrasts of beautiful, antic motion. I love the moment when Lockhart talks to Pembroke as Pembroke strides into a wading pool: a bear of a man, an obvious alpha, dunking himself out of sight like a Faulknerian catfish. The film is about these contrasts, and if its theme is nihilistic, its presentation suggests that there is beauty even in this truth--and that beauty is enough. It's a mess, but an exquisite one. The final shot is the crystallization of this tension between hopelessness and the hope represented by art--whether a grimace or a smile, it's not clear. But it's a future in question, which is better, you'll agree, than most of the more certain alternatives. Originally published: February 19, 2017. 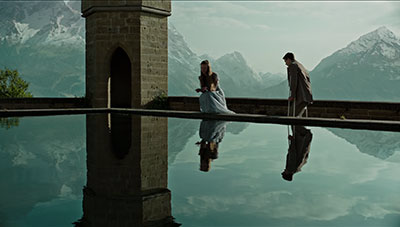 THE BLU-RAY DISC
by Bill Chambers A Cure for Wellness comes to Blu-ray in a 1.78:1, 1080p transfer. Like another recent Fox release, Jackie, the film was actually shot in 1.66:1 and projected that way theatrically (DP Bojan Bazelli took advantage of the ARRI Alexa XT's ability to shoot "Open Gate," adding vertical resolution to a frame that works out to about 1.55:1), but although Jackie made it to video with its original aspect ratio intact, A Cure for Wellness has been slightly clipped to fill the screen. Perhaps the thinking is that it's less of an arthouse title, and therefore a pillarboxed image would be more likely to confound viewers. Perhaps the squarer frame was perceived to make less of an impact at home. In any case, the presentation is extremely impressive otherwise, exhibiting tactile detail and superior dynamic range. The starkly-muted palette, which Bazelli calls a deliberate homage to his and Gore Verbinski's own The Ring, has an aquatic, sickly overlay that never becomes too dense, though I suspect a 4K HDR version--eschewed despite Fox's commitment to the UHD format, probably due to the movie's poor box-office showing--would enrich the limited spectrum of colours. The attendant 7.1 DTS-HD MA track crisply reproduces an indefatigably atmospheric mix that occasionally cranks up to full-on rollicking in the manner of Verbinski's Pirates of the Caribbean movies. (During the fiery climax, for instance.) There's a transparency to the audio that can be really unsettling--the soundtrack is sort of inescapable, like the walls in which Lockhart finds himself trapped.

Launching a humble helping of extras, "The Score" (4 mins., HD) was shot at Abbey Road Studios during the recording of Benjamin Wallfisch's orchestral score. Wallfisch sprinkles the piece with fittingly pretentious soundbites, saying Verbinski described the film to him as "the dark spots on the X-ray of our conscience." A lengthy deleted scene (5 mins., HD), given the title "It's Wonderful Here," clarifies that the aquifier's water is highly-oxygenated (i.e., breathable) and shows Lockhart's first, panicked suspension underwater, but does indeed feel supplemental and inessential to the film, especially when Verbinski indulges in another quick-cut quasi-flashback montage. Three tongue-in-cheek "Meditations" (3 mins. apiece, HD) are divided into water, air, and earth and offer tongue-in-cheek narration ("Let the dirt inside you") over unnervingly calm loops of B-roll. One domestic and two international trailers for A Cure for Wellness join previews for Morgan, The Belko Experiment, and Shut In in rounding out the disc. A DVD of the movie and a voucher to download it are included inside the keepcase. 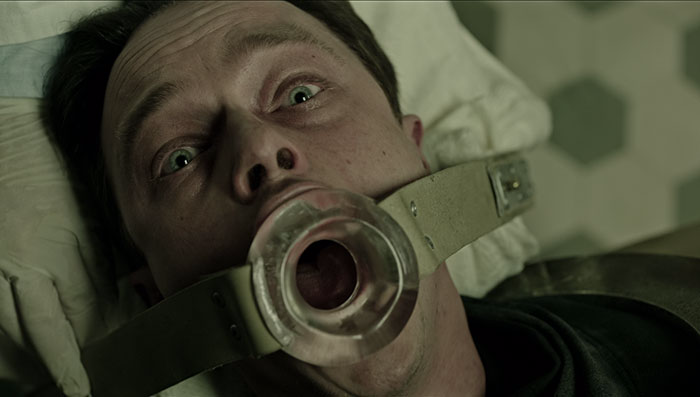