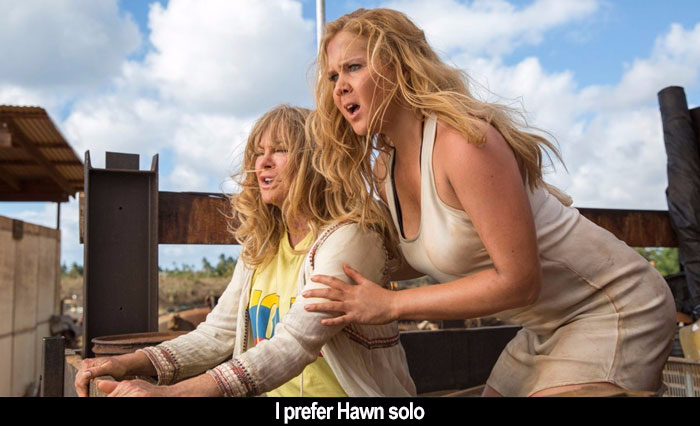 by Walter Chaw Snatched is an unbearable piece of shit about an unbearable piece of shit (Amy Schumer) and her mother (Goldie Hawn), who get kidnapped for ransom in Ecuador and eventually escape into Colombia. Being an unbearable piece of shit is, of course, Amy Schumer's shtick, and she plays it to the hilt here as Emily, a self-absorbed, selfie-obsessed piece of shit who gets dumped by her boyfriend (Randall Park, describing their respective career trajectories in his only bit of dialogue) after losing her job. Said boyfriend is a rocker about to go big and be inundated with "hundreds of pussies," breaking the ice on the vagina jokes that begin with the title, sort of, and continue more or less unabated for ninety interminable minutes. Fans of Schumer will be reminded that her vagina smells like soup. It occurs to me that the only way this film could have been good would be if Tom Green were starring in it and it was twenty years ago. Tom Green was brave. Amy Schumer is not brave.

Suddenly single, Emily guilts her shut-in mother Linda (Hawn) into taking her ex's non-refundable ticket to Ecuador for a spa vacation, where they meet "platonic" lesbian couple Ruth (Wanda Sykes) and Barb (Joan Cusack). Barb is a former special forces spook who has cut out her own tongue, leading to a weird Penn & Teller relationship in which Ruth does all the talking and Barb skulks around. Making the decision to rob one of the most gifted comic actors of her generation of the ability to speak says volumes about the choices Snatched makes. It's woke as fuck to have Emily broken up with by an Asian boyfriend, to have lesbian buddies (one of whom? Black), to have a black state department guy, amirite? Woke enough, I guess, to forgive the rest of it for being a somehow more terrible and racially-insensitive remake of The Jewel of the Nile. There comes a point in the middle of all this liberal inclusiveness bullshit where shoehorning in minorities is actually more offensive than not. I didn't think it was funny when Emily accidentally murders a Latin thug and the thug's father screams about his "only son." What an old stick-in-the-mud I've turned out to be.

Anyway, Snatched is mainly about Hawn coming out of a 15-year retirement to resurrect the kind of role she used to play all the time. Here, though, she's pinched, paralyzed; closed-off from the effervescence of her signature performances. And in scenes where she's asked to demonstrate some level of physicality, I felt, distinctly, like she might shatter. All this to say that she's badly misused in a movie as self-absorbed and tediously narcissistic as its protagonist. It's arguable that the film is fine up until Emily goes to visit Linda and Emily's agoraphobic brother (Ike Barinholtz), but it's one of those arguments you make when you're finding ways not to piss on something people probably liked more than you did. Snatched would've been better if it had twice the courage and a third of the cocksure self-regard. The funniest thing about this...trainwreck is that Schumer's act is already and considerably more elderly and decrepit than Hawn's ever was.