Pirates of the Caribbean: Dead Men Tell No Tales (2017) 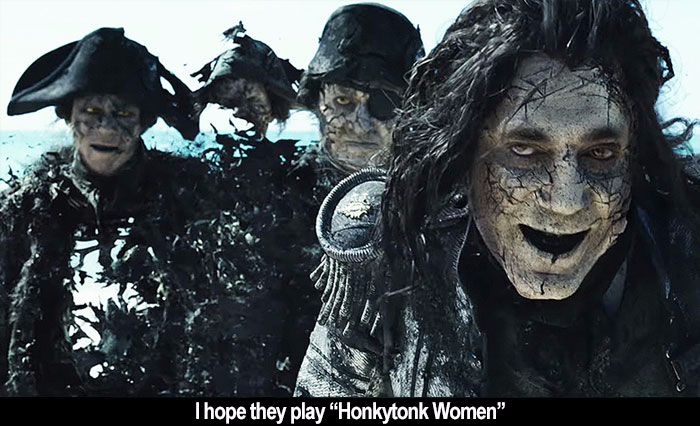 by Walter Chaw Pirates of the Caribbean: Dead Men Tell No Tales (hereafter Pirates 5) is stultifyingly boring, which is interesting because lots of stuff happens in it, constantly. It's guilty of a kind of antic, Brownian motion that suggests all of the repugnance inspired by a bivouac of army ants and none of the creepy sense of underlying order. It's like watching stirred tea: brown and insensible. Just like. Consider the first major set-piece, in which our jolly Roger, Captain Jack Sparrow (Johnny Depp, starting to look like those leather bags you find at Himalayan shops), conspires with his truncated crew to steal a giant iron safe and ends up stealing the entire bank. The entire bank, savvy? Compare it against the brilliance of the train sequence in 2013's The Lone Ranger to appreciate exactly how underestimated that film was, and exactly how estimated this one is. There's a team of horses, a little person, a building being dragged through an island town, shit flying everywhere, and Capt. Jack doing Buster Keaton if Buster Keaton weren't an artist and were, instead, an aging actor most of the audience is beginning to suspect is playing himself now. Later, there's a cameo by Paul McCartney and, you know, same, same. The posture is rock 'n' roll when really it's one of those "Top of the Charts" cover compilations gamely put together by the house band. It sucks. If it makes you feel cheated, well, you were.

The plot would take as long to decipher as it would to describe. Sufficed to say this franchise is at the point in its maturity that it features the children of the first film's leads. It's possible to do this well (see: Logan). It's also possible to do it like Pirates 5. Henry (Brenton Thwaites), son of the Orlando Bloom and Keira Knightley characters from previous instalments, embarks on a quest to find Jack Sparrow in order to free his dad from a curse. Meanwhile, Carina (Kaya Scodelario), daughter of no-fair-telling (you'll figure it out right away, if you care (no one cares)), is a proud astronomer and horologist trying to decipher one of Galileo's notebooks, the better to locate the final resting place of Poseidon's trident. (Yes, Pirates 5 is another sequel to The Da Vinci Code that no one wanted.) What follows is one of those movies where people are constantly rushing towards something or another, talking about things excitedly as they do, and then getting swallowed up by giant special-effects set-pieces. I'm not against giant special-effects set-pieces, mind, but I'm not fond of loud cacophonies of action you can't follow, that have no geographical grounding, and that exist mainly to pad the runtime to feature-length. In the middle, there's undead Spanish pirate hunter Salazar (Javier Bardem), who looks like the grown-up version of the ghost in The Devil's Backbone and represents the single redeeming quality of the whole thing. Salazar has his own subplot, introduced by a flashback with the suddenly-fashionable CGI-phantom effect of a young version of an actor. I don't know what it's about. It doesn't matter, so let's not pretend it does.

Barbossa (Geoffrey Rush) returns as well. I was surprised to see he wasn't undead like the other pirates, meaning I have almost no memory of the other four movies at all. I do remember liking the first one quite a bit; the rest blur together. I confuse some of them with Rango. Not one but three magical artifacts figure into the narrative, including one that teleports from one location into the hands of a throwaway plot-device of a character established, it seems, for the sole purpose of doing this one impossible thing. How? "I have my ways," she says. For a film that's mostly exposition, this is the best it could do. I laughed. It's the one funny thing in a movie trying a lot to be funny. There is an evil English captain whose job it is to kill pirates (who, after all, rape and pillage for a living), as well as a joke early on about an English governor's wife cuckolding him with Jack Sparrow that struck me as odd, mainly because I'm confused about who the heroes of this Disney release are supposed to be. At the end, there's a giant sequence that borrows and upgrades the parting of the Red Sea from The Ten Commandments. It's confusing here, though, because as in Guardians of the Galaxy 2, there's a noble sacrifice by a father figure that doesn't appear to need to be fatal--not unless someone who's lived his life on the ocean doesn’t somehow know how to swim. Pirates 5, then, is mostly interesting because of the company it keeps, materializing in the middle of a cycle of tentpole pictures engaged in orphans discovering fathers, only to find them disappointing and redeemable solely through their ultimate sacrifice. One can hope that this is some kind of predictive fantasy about unfit leaders doing the right thing and falling on their proverbial swords once they realize they're more effective as a symbol than a fact. I'm not holding my breath. It's all sort of worth it, though, just for a scene in which Bardem executes a dozen or so men by doing a saucy rat-a-tat with his sword on a ship's deck. Well, no, it isn't.