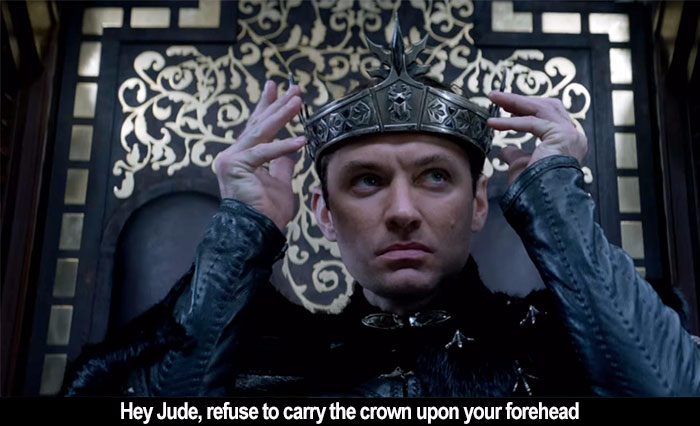 by Walter Chaw This is the part where I confirm I've read my Malory and Pyle, my T.H. White, of course. That I've seen Excalibur and Monty Python and the Holy Grail and The Sword in the Stone and any number of First Knights, including even Unidentified Flying Oddball, which I loved when I was a kid easily-scarred by that weird android doppelgänger of Dennis Dugan's wayward astronaut. I was a big fan, too, of Choose Your Own Adventure #86: Knights of the Round Table. In other words, one of the most popular Western myths went pile-driving through the three decades of my relative cultural sentience. When I had a brief obsession with WWII, I brushed up on all the literature just to better understand why the British saw Churchill as the Once and Future King. Just last year, one of 2016's best films, Jackie, featured an extended sequence in which the titular widow wandered through the White House listening to the score from Camelot. Even my early Lego fantasies with the Castle playsets featured an adultery subplot where my French best friend made off with my Queen. I'm not a fan, then, so much as a victim of the mythology's ubiquity.

That brings us to Guy Ritchie's King Arthur: Legend of the Sword, which goes the route of recasting the whole shebang as a callback to the early Cockney crime fandangos that established Ritchie as the first and arguably best of the Tarantino clones. Time has shown him to be something other than that. After his years in the Madonna wilderness, Ritchie cemented his resurgence with last year's genuinely charming, occasionally great The Man from U.N.C.L.E. and now a new King Arthur that's fun, modern-feeling, and gritty without being dour or unpleasant. It opens with a prologue in which Uther Pendragon (Eric Bana) fends off a war-elephant-led assault on his kingdom with an Excalibur that is almost a lightsaber in its legendary bona fides. Shenanigans are afoot, however, and betrayals, and soon baby Arthur is set adrift, Moses-like, to be found by prostitutes and raised in squalor. Ritchie handles the prologue and growing/training montages with aplomb and originality; it strikes me that this is what Zach Snyder would like, but entirely fails, to do. It strikes me, too, that this is the film I'd hoped Robin Hood: Prince of Thieves was going to be almost thirty years ago.

There's a moment in the middle where evil brother-killing usurper Vortigern (Jude Law) wonders aloud what Arthur (Charlie Hunnam) could have become had he been brought up in the comfort and support of Camelot rather than in the horror and indignity of the brothel to which he was exiled. It's a fascinating bit of class conversation in a film that's deceptively British about the topic. Consider the accents and Ritchie's use of them, particularly in one sequence where Arthur is tasked to recount the events of the day that flirts, deliciously, with rhyming slang. The question of parentage at the heart of the myth, then, becomes more than just "Prince and the Pauper" fodder: it becomes a conversation about nature/nurture that sides, it seems, with the latter. It's a humanistic take on a tale generally meant to glorify the mystery of bloodline. Arthur's egalitarianism is evidently born of his affinity with the whores he champions, and the criminals with whom he runs his shakedowns and grifts. I love a scene where Ritchie takes the extreme high-angle and looks down on a rabble of black-clad layabouts, packed into the bottom of a boat, with one man clad in white in the very middle of it. It's a shot that Hitchcock would've liked. That's Arthur. This Arthur, anyway, who says at one point that singling out an entire group of people based on the behaviour of one or two is monstrous. This Arthur is progressive.

King Arthur: Legend of the Sword is lively, spirited, the kind of movie that features a sea witch (Lorraine Bruce) lolling in a ball of flesh-coloured tentacles as her sisters (?) swim around, making promises and asking for the blood of loved ones. Vortigern sits on a throne in a way matched only by the final shot of The Chronicles of Riddick (a film this one resembles on more than one world-building occasion), and though it's a disappointment that Merlin never appears, his never-named emissary (Astrid Bergès-Frisbey), with her French growl, has a couple of fun Suicide Girl moments. This is a Mod version of the Arthurian legend and the legend doesn't suffer for it--is in truth enhanced by it. It's a fresh take on a story so worn and exhausted that it should only probably ever be revisited this way: irreverently, by a director who's made a name for himself already in this style and thematic peculiarity. An auteur, damnit. The picture, alas, won't be good enough for anyone except for the people over it enough not to give a shit. I've already seen it twice.