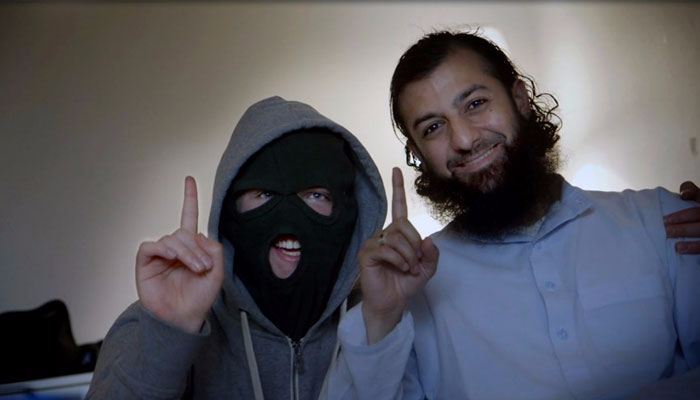 by Bill Chambers There's a popular film and TV trope that's become a Twitter meme where a freeze-frame of someone in a compromising position is accompanied by a record-scratch on the soundtrack and a narrator intoning, "Hey, that's me. You're probably wondering how I ended up in this situation." So it's cringeworthy when a new movie opens like this (even sans record-scratch), yet Recruiting for Jihad gets away with it, I think, because the filmmaker's predicament--he's about to consort with jihadists--inspires genuine curiosity, and because it immediately cracks a window on a world with the potential to be suffocating in its myopia. Norwegian-born Ubaydullah Hussain, the spokesman for a vocally pro-terror organization based in Norway called The Prophet's Ummah, is rumoured, per the title, to be a recruiter for ISIS. Co-director Adil Khan Farooq's interest in him is anthropological: He wants to understand why they're so ideologically opposed when, on paper, they've led parallel lives, having both been born in the mid-'80s and raised among the white, Christian middle-class. The question falls by the wayside in favour of investigative journalism once Hussain pulls back the curtain on his operation for Farooq and partner Ulrik Imtiaz Rolfsen, although it's perhaps answered by a couple of white boys we get to know who found Hussain's cult after losing themselves in the bottle. (If anything, the film fails at adequately addressing why Farooq wasn't radicalized.) While handing out flyers in the street, one of these lost souls is stunned silent when a female passerby harangues him for the subjugation of women in Islam; it's tragically clear that he's out of his depth. Later, we learn of the kid's death in Syria, and Hussain is jealous that he got to die a martyr. Hussain is a magnetic, infuriating subject who favours semantic loopholes in defending his "orthodox" beliefs, as becomes abundantly clear in a closing tête-à-tête during which Farooq points out Hussain's hypocrisies (death to Western civilization/let's order shakes at Mickey D's), checks to see if there's any wiggle room in his ISIS fanboyism, and begs for insight into this mysterious ailment that's allegedly keeping him from recruiting himself. (Alas, some things are between a man and Allah.) Though it would make for a compelling short on its own, in Recruiting for Jihad it's merely the coda to an exasperating but compulsively watchable portrait of religious extremism that may be the quintessential film about how you can't argue with an idiot.