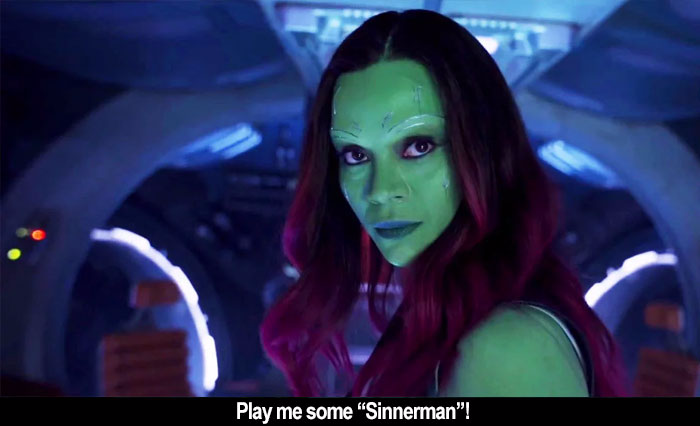 by Walter Chaw Twice as desperate/half as good, James Gunn's Guardians of the Galaxy Vol. 2 (hereafter GOTG2) is still sort of fun even if the moments of delirious, spontaneous joy we'd come to know from the previous film are few and far between. Arguably, only the opening title sequence, which seems to make sport a little tiny bit of the marketing insanity around "Dancing Baby Groot," really hits the right balance of self-knowledge and sticking the landing. Consider, though, that even in that sequence there's too long spent on the same "stoplight" gag from the first film's mid-credits scene where Groot (voiced by Vin Diesel) stops dancing whenever Drax (Dave Bautista) looks at him. When you're making a hip in-joke reference to a stinger buried in the end titles of your prequel, you've gone deep into the post-modern. Absent, too, for the most part, is the ease of "Vol. 1"'s familial subplot, dragged as it is into the foreground and forced into exposition as each troubled member of the titular gang has a moment to wax eloquent (and at length) about how they only ever wanted a dad/sister/family/daughter/wife/son/I get it already. What's left is a movie that feels arrogant, somehow, as though it knows by its nature that it's critic proof and will make a bajillion dollars and is now the 800lb gorilla in the Marvel room. Just exactly like that, come to think of it.

Star Lord (Chris Pratt) and Gamora (Zoe Saldana) have an "unspoken thing." Drax and new arrival Mantis (Pom Klementieff) have one of those, too. Rocket (voiced by Bradley Cooper) finds a father figure in Yondu (Henry, portrait of a serial killer) and Star Lord finds one in Ego (Kurt Russell). Gamora is looking to build bridges with her sister Nebula (Karen Gillan), and vice versa. These are not so much parallel developments as they are random opportunities for situational comedy mostly spoiled in advance by the trailer. Groot is a baby and has a good scene where he doesn't seem to understand basic instructions that Gunn, his smarts and ability to craft tight narratives surfacing now and again from beneath the grandstanding, pays off later--though, frankly, not very well. Ego, it turns out, is a sentient planet who wants to "reproduce" himself throughout the galaxy. If you're confused about where this is going, Rocket, helpfully, asks at one point if they're "going to save the galaxy again." No fair peeking.

GOTG2 is plagued by the sweat showing. All of the underlying structure is visible. One of the defining triumphs of the first film was how effortless it felt: the chainsaw juggler eating an apple. The closest comparison I can draw is probably Airplane! II: The Sequel versus the original Airplane!. I'm sure some people prefer the second one, though I've never met any. Guardians of the Galaxy's soundtrack of AM Gold standards had subtle things to say about the Jack Kirby visuals and balls-insane world-building, and the cast had none of the burden of sudden stratospheric popularity weighing them down. The songs this time around comes across as desperately-curated rather than inspired. The visuals are stunning and beautiful, it's true, but Avatar-like; there's nothing truly awe-inspiring about really pretty calendar pictures of a national park. What's most painful is the level of emotional exposition going on: the exchange where Yondu lays out, at length, how he and Rocket are just the same broken thing on the inside, for instance, and the inexplicable sacrifice later that the first film has already debunked as inevitable. Worse is the revelation that Nebula's current cyborg state is a result of child abuse and Gamora's--the ostensible romantic lead's--horrifying sociopathy. Suddenly, it's all not so funny anymore. The best part of GOTG2 is Mantis, who's not only completely guileless, but also vulnerable, deeply complicated (she's essentially a comfort woman enslaved by a powerful white guy), and ultimately heroic. Well, for a while, at least. Then she's unconscious and has to be carried around.

Problematic and hobbled by expectation, GOTG2 does have moments where a bit of the old magic peeks through. Its problems are mainly encapsulated by the decision to have not one or two post-credits sequences, but a truly patience-testing six. Gags about David Hasselhoff fail to land like the first film's rumination on Kevin Bacon and Gamora's horror at the cruelty of Footloose; and the picture's baddies, gold-skinned supermodels, lack menace, seeming afterthoughts dispelled not once, but twice, by dei ex machina (literally, in the first instance). The picture substitutes magnification for invention and, having upped the stakes in terms of spectacle, finds itself making caricatures of characters who were beautifully, even subtly, developed in the first film. Guardians of the Galaxy Vol. 2 is a fair diversion that feels like a parody of Guardians of the Galaxy. Sometimes a loving one. Sometimes just an accurate one.