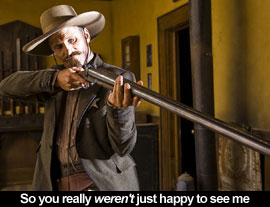 by Walter Chaw There's a great moment early on in Ed Harris's howler of a vanity piece Appaloosa where gunman-for-hire Virgil Cole (Harris) and his sidekick Everett (Viggo Mortensen) have a friendly conversation with evil Briton Randall Bragg (Jeremy Irons) about law and order in the Old West. The rest of it is garbage. Comparisons of this film to Clint Eastwood's Unforgiven have been floating around, but where that picture is about the complexities of the promises men make to women that they can't keep, Appaloosa is macho juvenilia that espouses the idea of "bros before hos" and, thus, renders all the men unflawed in their limited, brutal glory and all the women bimbos, sluts, or bimbo-sluts. Enter Renée Zellweger's repugnant turn as mattress-back Allison French, her predilection for spreading her legs for the highest-ranking stud viewed not so much as a moral failing as one of those things women do either with principle (see: saloon girl Katie (Ariadna Gil)), or without (Allison). From her bizarre appearance (she looks like a swollen Bill Mumy) to that pinched, kewpie-doll chipmunk chitter-chatter she uses in the mawkish belief that it's an endearing quality in someone past the age of six, Zellweger would appear to be an easy target of blame for the film's general inadequacy. (Likewise shitting in the flan is composer Jeff Beal, whose theme for Allison is one of the most invasive, repugnant bits of musical hate-crime not composed by James Horner; Beal only increases the picture's cartoon feel.) Closer to the mark, though, would be to identify that Appaloosa falls on its ass because its worldview is arrested and incurious, content to offer that women are mercurial trollops and men, good or evil, are the bedrock of civilization. When Appaloosa is described as "old-fashioned," hear spin on more accurate terms like "ossified" and "badly-dated" and "naïve."

Too depressing to get into in much detail, Appaloosa is about two guys with shady pasts hired to clean up a dusty old cow town overrun by a maniacal Englishman and his motley band of expendable, ultimately invisible henchmen. At it for a long time, they chew over their one-liners with a gallery of a hundred years of better pictures bestowing mute disapproval at this one's clumsy self-consciousness. Mortensen elevates the material as he is wont to do, but something Mortensen has never seemed entirely capable of is fixing a movie by himself. Unfair to ask it of him in Appaloosa, where Harris, who sings the ballad that closes the picture, gives himself the choicest cuts--as well as the girl, the noble injury, the emotional disability, and the distended run-time that preserves every negligible sheaf of his misguided screenplay. Without poetry, all you have left are ragged jigsaws of movies that actually mean something, strung together like a popcorn garland on a desiccated tree. Harris can play the notes, sort of, but he doesn't hear the music. Another pair of gunmen (Lance Henriksen and Adam Nelson) appear at some point, introducing a moment of stupid post-modern slapstick followed fast by a weird anticlimactic confrontation with savages, followed then by a shootout ending in a punchline that seems more like an apology that the film isn't better. Because it's obtuse when it's not head-smackingly obvious, there's a narration that opens and tourniquets the piece off with a neat, repugnant little bow.

Often playing out like the world's most expensive episode of "Alias Smith and Jones", Appaloosa, adapted from a Robert Parker novel by Harris and first-time scribe Robert Knott, tries to find character development in Virgil's unlikely courtship of Allison set against the easy bonhomie of Virgil and Everett. Stacking up unfavourably against modern genre masterpieces like HBO's "Deadwood" and of course Unforgiven, the film, it goes without saying, also can't hold a candle to everything from the Boetticher/Kennedy cycle to even the least of Sam Peckinpah's essays on masculinity pushed to its terminus. Peek beneath Appaloosa's handsome covers and find nothing much--a faux-prestige picture banking on its sterling cast and Oscar pedigree (like the concurrent Blindness) for gravitas that it can't produce on its own. Sexist because it's ignorant and not because it's trying to illustrate a point about sexism, the film is the logical, populist end-point of anti-intellectual entertainments that (and leaders who) steadfastly fail to challenge ideas. At the end of a season that saw one of the most thoughtful American blockbusters since the height of the New American Cinema become the second-highest-grossing picture of all-time, Appaloosa is a relic out of time in every way within and without. Originally published: October 3, 2008.