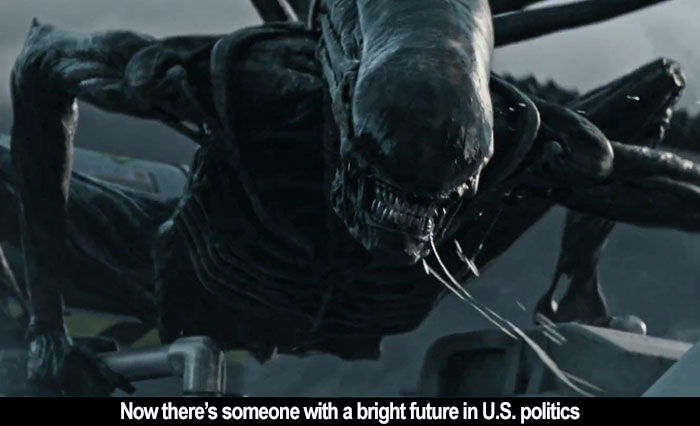 by Walter Chaw When you call your film "Prometheus," you're borrowing centuries of critical thought, grafting yourself to the idea of the ascension of Christianity on the backs of vanquished pantheons and suggesting the mischief in stealing the light of Heaven (the better with which to build your own unholy automatons). Mary Shelley knew this when she subtitled Frankenstein "Or, the Modern Prometheus," and Ridley Scott knew this, too, when he partnered with everyone's favourite half-assed theologian/philosopher/one-eyed king Damon Lindelof to make a prequel to one of his two or three movies that are worth a damn, Alien. Not content to leave well enough alone, Scott is back with Alien: Covenant (hereafter Covenant), whose title invokes either a promise made by God as represented by Jesus's crucifixion in the Christian New Testament, or the promises God makes in the Old Testament to Noah, Abraham, Moses, and David--each of which, Christians may tell you, predicts the New Covenant. The old ones were written in stone, you see, but the new one is written on your heart. Another Shelley, Percy, makes a cameo in this one as his "Ozymandias" is recited at some length, reminding mainly that it was used better, and more subtly, in "Breaking Bad". There, it was assumed the viewer knew the piece in question. The film narrates it. It's the difference between being respectful of your audience, and being a pretentious dick.

It's worse because Covenant begins with an android, David (Michael Fassbender), apparently naming itself after Michelangelo's statue while making the first allusion to the film's own title, i.e., the "Davidic Covenant," in which God promises that Jesus will rise from David's line and establish his throne for all eternity. David then proceeds to play Wagner's "Entry of the Gods Into Valhalla" from Das Rheingold, the last part of his Der Ring des Nibelungen to be written even though it appears first in the Ring cycle. (It's a prequel, right?) Here's the thing about Wagner. Wagner is a genius who has one wonderful idea and then repeats it for four hours. This is also Scott. Here's something else: the piece reminds me of Milton's 1629 ode "On the Morning of Christ's Nativity," which begins as your standard hoohah only to, somewhere around the nineteenth stanza, go all batshit as Ol' John starts listing how every old god is effectively murdered and absorbed by Christ. It's the sort of thing, along with Paradise Lost, that caused the Romanticists--William Blake, in particular--to refer to Milton as a "true poet of the devil's party without knowing it." Covenant also references Milton and Paradise Lost, because of course it does. It does this, incidentally, right before the broadest and most easily-unravelled cliffhanger twisty-twist there ever was. It's a moment of supreme ostentation, followed immediately by a plot device so dull as to be insulting. It probably bears mentioning that Wagner wrote an opera about the German knight/poet Tannhäuser, likely the avenue through which Scott is having a laugh with a loose, dynastic connection to his own Blade Runner. Aren't we clever?

Anyway, jump forward a bit to a ship ("The Covenant," natch), and lo do I long for the days when the ships in this universe were named after a Joseph Conrad novel and a location therein. If they really wanted to be clever, they should've named the fucking ship "The Fidanza." Passengers-like, said ship contains settlers on a long, suspended-animation-aided journey to an Edenic planet, upon which they will reproduce gladly while doing none of the scientific work necessary to ensure there are no fatal microbes or flora/fauna native to said Edenic Paradise. This wouldn't be that big of a deal, except that in both Prometheus and Covenant, lack of caution is exactly the thing that kills everyone. Note, too, that in the original Alien, much of the initial tension between the crew was rooted in Ripley's horror that standard quarantine protocols had been violated. Alien is about what happens when people err for the sake of friends. Prometheus and now Covenant are about what happens to idiots. Alien is also about the greed of corporations that would manufacture a crisis, the better to harvest a deadly agent at the expense of their employees. Prometheus and Covenant are about Acts of God, damnit! There's a line late in Covenant referencing Christ in which the Christ figure, David, rages that humans are all seeking resurrection without having earned it. It's a particularly tortured way to round an extended analogy into some kind of shape. The sort of thing where after thousands of words of caffeinated, late-night dithering, you just decide to state your thesis again and hope it coheres. Bored? Yes, I was, too.

Anyway, there's a malfunction and the crew is woken up early. Mercifully, the captain who's played by James Franco in a prequel clip on YouTube that fans were urged to watch to help prepare them for the movie, is incinerated at length and in detail. Unmercifully, he's replaced by a snivelling "man of faith" Oram (Billy Crudup). Oram whines about how he doesn't know that people hate him for his singularly ineffective mien and communication style but suspects they hate him for his sheeplike and unexamined religiosity. (Oram is a handy critique of Covenant, it turns out.) Meanwhile, Oram's first mate, wet-eyed Daniels (Katherine Waterston, who, after making an enormous impression in Inherent Vice, has made nothing of an impression ever since), spends Covenant cosplaying a crying Sigourney Weaver. Daniels doesn't like that they received a rogue transmission of a John Denver song (the one that begins "almost heaven"--get it?) that is apparently diverting The Covenant to a "habitable" planet seven years out of the way from their original destination. But divert they do. It bears mentioning that there is a character in this film played by Danny McBride named "Tennessee," because there was a character named "Dallas" in the first film. Later, everyone starts calling him "T," which, you know, is worse. Tennessee is a hillbilly in a science-fiction film of the "One Night" variety from The Abyss, meaning he's at once a horrible stereotype ("I KNOWS my John Denver!") and the plot device upon whose terrible decisions much of the last part of the film will hinge. As Tennessee repeatedly places the lives of two-thousand sleeping colonists at risk because his "little lady" is on "dat dere planet," it becomes difficult to give much of a shit about any of it.

Meanwhile, on the planet, people poke at pods, releasing spores that give them the flu, then erupt little white aliens from their spines and mouths. It's a virus, you see, not a spore--and, surprise, it's not a virus at all, but a thing that is maybe an embryo; also, it's your mother. It doesn't matter. It seems the ship from Prometheus has crashed here, on the planet of the mysterious Engineers, killing the human Elizabeth (Noomi Rapace, whose fifteen minutes were more like three) and reconstituting fey android David, who's spent his time in exile growing his hair out (?!), sketching biological diagrams like the doctor in Master and Commander, and experimenting with the wily xenomorph, of which there are ever just enough and never too many. His latest iteration, it seems, is the one that comes out of an egg. I like the scene where the obviously-deranged killer-bot, so in love with the monster, invites poor Oram to peek inside the freshly-opened egg. "Something to see!" he does in his best high Royal Shakespeare Company; and poor, stupid Oram looks. In Covenant, the devil, David, is correct. The humans are too stupid to live. It's hard, given recent sociopolitical events, to mount too vigorous a protest.

The problem with Covenant, beyond the howling boredom of its first hour and the remarkably-poor CGI employed in the manufacture of its various beasties, is that it's all references and no referents. It's an example of a post-modern work in the sense that it borrows fragments to shore up against its ruins, but rather than project a defense of classicism and knowledge, as T.S. Eliot does, it holds nothing at its core except this vague notion that something was popular once and why can't we quite catch lightning in a bottle again. The victim of a massive rework, rumour has it, after the outcry over Prometheus, Covenant is fascinating mainly because it's a Frankenstein's monster of dimly-understood things. David, upon his awakening in the opening moments, looks around the room and names various artworks, brands, and makes of piano. He is Google. The process of the film is David becoming an artist himself, a musician who composes rather than recites, and his greatest medium is the flesh and acid blood of an H.R. Giger nightmare. The Alien itself, then, this majestic, symbolic bogey alight with its vagina-dentata infancy metastasizing through to its full phallic/rapist glory, is reduced here to the fanciful noodling of a created being. It ceases to be symbol when it becomes the product of metaphor. The mythology's caution metastasizes with it, going from a primal condemnation of meat and sin into just another rumination on the ethics of artificial intelligence. The greatest irony of Covenant, a picture best described as bad smart parts married to bad stupid parts, is that were it freed of these leaden, Harold Bloom-ian callouts, it might have gotten points for trying.

Like Prometheus, Covenant looks great. Like Tim Burton, Ridley Scott is a stylist at the mercy of material. Free of the right collaborators, Scott makes pretty pictures, period. This one, more than others of his, perhaps, pretends at something larger by making the kind of show-offy statements you generally overhear at faculty parties at semester's end in chichi college communities. In true blowhard fashion, it states and restates its points to guarantee they'll be properly appreciated; it's less smart than smarmy. Covenant leaves you feeling like the undergrad whose pants your graduate advisor is trying to impress his way into. It falls apart, though, since its characters are all made of straw, constructed to act out their brief lives in service of an audience to which the movie feels superior. It boasts of asking "big questions" without considering that big questions are easy to ask. Answering them in a way that feels poignant unto sublime? That's what actual artists do. Anyone can paint a Rothko, but Rothko did it first. Covenant is imitation at its most bathetic. It's late-period Dario Argento. At a certain point, an artist forgets his inspiration and begins to try to bring it back from the dead in a series of echoes of declining fidelity--The Monkey's Paw of longevity. It happens to the best of them. It's happened to Ridley Scott, too.