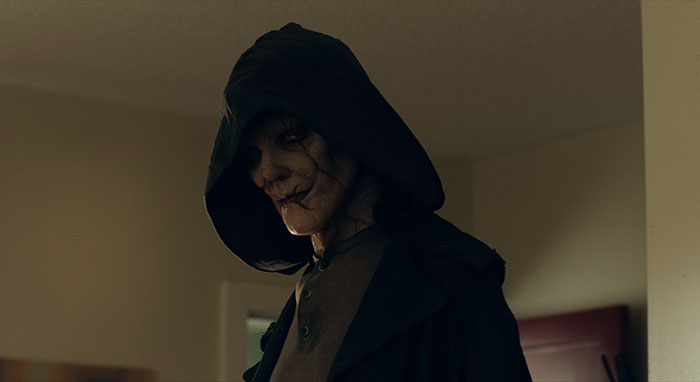 by Bill Chambers The Bye Bye Man begins as Terminator: Nebbish, with a Poindexter in a sweater vest named Larry (Leigh Whannell, of Saw fame) pulling up to a suburban home and asking the lady of the house, Jane (Lara Knox), if she told anybody "about the name." Affirmative. Larry then returns to his vehicle, retrieves a shotgun, and blasts a hole through Jane's front door. We see a man jump out of his wheelchair in the living-room window in a tiny, easy-to-miss background detail I suspect would've been airbrushed out of a more respectable film, because the prologue ends there in the theatrical cut. In the unrated version on Blu-ray, it continues on to show Larry entering the house, finishing Jane off, executing the wheelchair dude, Rick (Andrew Gorell), as he futilely drags himself across the carpet, and grimly, dutifully marching down the street to kill some neighbours Rick just threw under the bus. Smoothly staged in one take, the sequence reminds not-unfavourably of A Serious Man, getting most of its period authenticity--the year is 1969--and middle-class dread from an aesthetic ape of that film. (The chyron-ascribed Madison, WI setting is pretty close to Coen Brothers territory, too.) It's suitably horrific. Until, that is, you start thinking about Rick: Why does his escape plan involve slumping to the floor like a sack of potatoes? The whole point of wheelchairs, see, is that they have wheels--an innovation that gave disabled people an efficient, dignified way to get a bag of chips from the kitchen or flee an axe murderer. As we will soon discover, the titular Bye Bye Man makes his marks do absurd, irrational things; the problem is, The Bye Bye Man doesn't quite know how to portray this without being hilarible itself.

Consider the scene where our nominal hero and Final Girl, Elliot (Douglas Smith), is driving witchy acquaintance Kim (Jenna Kanell) back to his house for an emergency séance when she insists on pulling over to aid the victims of a car accident only she can see. Rifling through her handbag while she's gone, Elliot notices a blood-stained hammer, and for some reason runs after her with it to warn her that she's headed towards a railroad crossing. A shot from the train conductor's POV sees this tableau for what it is: a madman with a hammer chasing a young woman into the path of an oncoming train. That decision to not have Elliot put down the blunt instrument ahead of time turns tragic irony into an outtake from The Jerk. Director Stacy Title is responsible for the cult favourite The Last Supper, a mordant satire about college liberals making a Sunday tradition out of murdering right-wing dinner guests. Is it possible The Bye Bye Man is actually a genre spoof? It's possible, but if so, it's that joke about people in horror movies always showing poor judgment taken to the witless extremes of Trump imitating Serge F. Kovaleski, the Pulitzer prize-winning reporter with a hand deformity, as someone with an intellectual impairment beyond even Trump's own. The subject of mocking becomes the audience for this sort of thing; as a horror fan watching The Bye Bye Man, I began to feel a bit like one of Title's dinner guests.

In the present, Elliot, his hot girlfriend Sasha (Cressida Bonas), and their best friend, a hunky black dude named John (Lucien Laviscount), all students of fictional but prestigious-sounding Buchanan Williams University (est. 1881), decide to get a cozy little murder house together off campus. During an unescorted stroll through a housewarming party open to both horny coeds and small children, Elliot's young niece (Erica Tremblay) finds a cursed coin underneath a cursed nightstand that belonged to Larry, setting in motion the discovery of the Bye Bye Man (Doug Jones), a mostly-unseen ghoul in a raincoat whose name alone is toxic. ("Don't say it, don't think it," the tagline goes.) In Elliot's determination, the Bye Bye Man preys on your worst fears, which is why Elliot keeps suspecting John and Sasha of commingling behind his back. But that doesn't exactly explain why he hallucinates Faye Dunaway catching fire (I mean, Meryl Streep, maybe), or why Sasha gets the flu--although that being her biggest phobia would certainly be consistent with her dishwater personality. As movie monsters go, the Bye Bye Man is at best a work-in-progress. Like the current POTUS, he thrives on publicity, yet he seems to seal his own extinction by driving his victims to murder-suicide. He spends an inordinate amount of time hanging from coat racks strictly to freak us out, like a psychotic Where's Waldo. He has no origin story beyond the fact of his existence--Larry unleashing him is the extent of his genesis--and therefore no motive beyond sadism. He has a Zuul-looking dog-thing that's never explained. The Bye Bye Man is the kind of movie that comes second or third in a series, when devising reasons for the horror bogey to be there comes second to nurturing his iconography.

For clarity I sought out "The Bridge to Body Island," the Robert Damon Schneck short story on which The Bye Bye Man is based. The film could've stood to take a lot more cues from the source material, starting with Schneck's hucksterish enthusiasm: this is the first instance that I can recall of an author including a reader-discretion warning due to the intensity of the tale he's about to tell. Clearly the biggest roadblock to doing the piece justice was that the Ouija franchise cornered the market on ouija board-based stories since its publication, but the "Bye-Bye Man" himself is a richer, more frightening--if also more problematic (he's a black, blind albino)--creation on the page. Unambiguously alive, for starters, he rides the rails in search of victims (thus explaining the sound of a train portending the Bye Bye Man's presence in the movie), psychically summoned by thoughts of his name and guided by his canine abomination, Gloomsinger. (What a great name!) Related as a first-hand account from Schneck's friend, the story doesn't do much except attempt to squeeze another rogue into the pantheon of urban legends, though it generates a palpable feeling of dread by observing Hitchcock's axiom of never letting the bomb go off. In the book, it doesn't matter if the Bye-Bye Man is out there for reals, because he's--imagine me tapping my noggin--already in here, turning three occult aficionados into sleepless paranoiacs and more or less eroding their bond. In the film, the title character all but waves 'hello' a few minutes into the picture, and his contagious curse has the banal maliciousness of a low-rent Samara.

To be fair, that viral aspect, however translated, has a timeliness in a world where white nationalism is spreading like a disease. And, you know, there's something about Larry. Larry, the Boomer who planted the seed for the ruination of our Millennial troika. This isn't a supremely well-developed allegory, but I'll take it. It's frustrating seeing The Bye Bye Man give up on its original ideas as well. The production design is as strange as it is underutilized, full of narrow hallways that prove pointlessly expressionistic and Being John Malkovich-esque cupboard-sized wall portals that are ultimately decorative. Elliot's jealousy manifests, at least in the unrated cut, the racially-charged image of John thrusting Sasha from behind (behold: white shame--a psychosexual snarl of miscegenation panic and cuckold fantasy), but "black best friend" is such a tired trope. Why not reverse the races of John and Elliot, or even John and Sasha? It's 2017, for Christ's sake. For that matter, no amount of second chances is going to turn Smith, the Canadian Eeyore, into a charismatic lead. The only thing The Bye Bye Man does with any ingenuity is be stupid--I personally never would've thought to engulf Faye Dunaway in digital flames in a million years. She hasn't had a good year, has she? 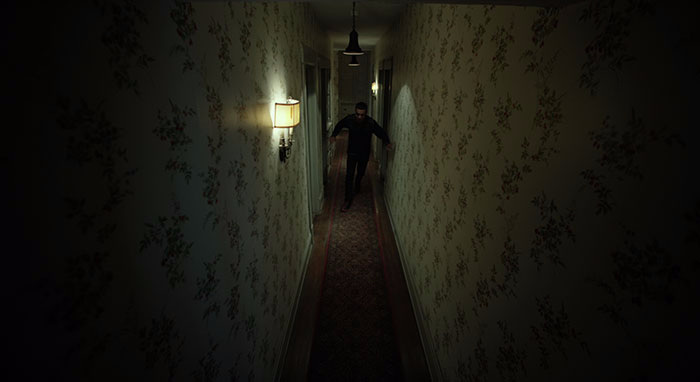 THE BLU-RAY DISC
Universal brings The Bye Bye Man to Blu-ray in PG-13 and unrated versions on the same side of a BD-50, the latter running three-plus minutes longer than the former. (Don't get your hopes up, kids: it would've garnered a soft R at best.) Although the film has been encoded twice rather than seamlessly branched, the feature is short enough that, some light banding notwithstanding, it appears to have had a negligible impact on the 1.83:1, 1080p transfer, which boasts impressive shadow detail beneath a persistent dimness. The digitally-sourced image is clean though relatively filmic, with silky blacks and the occasional flashbulb white. It's status quo for a modern low-budget horror movie, right down to the sickly colour grade. The attendant 5.1 DTS-HD MA track shows off a perhaps-surprisingly impressive mix with a tight low-end--dig those early shotgun blasts--and jump-scares that shred the soundstage like a serrated knife. Some of the atmospheric rear-channel cues have a convincingly creepy, hand-on-the-shoulder quality; it's possible The Bye Bye Man is nigh insufferable without these theme-park trappings. Trailers for The Space Between Us, Cult of Chucky, Split, Incarnate, and Sleepless round out a blessedly no-frills disc bundled with DVD and digital copies of the film. 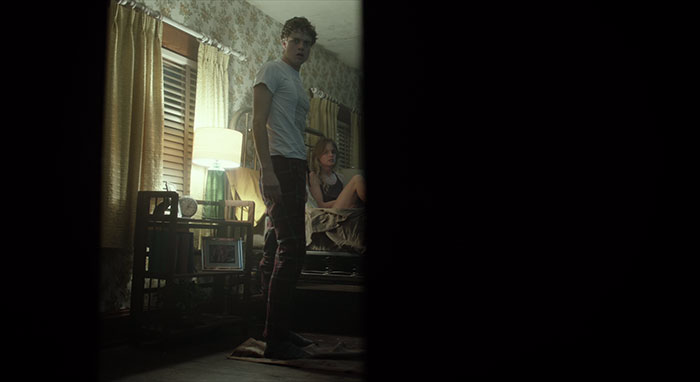