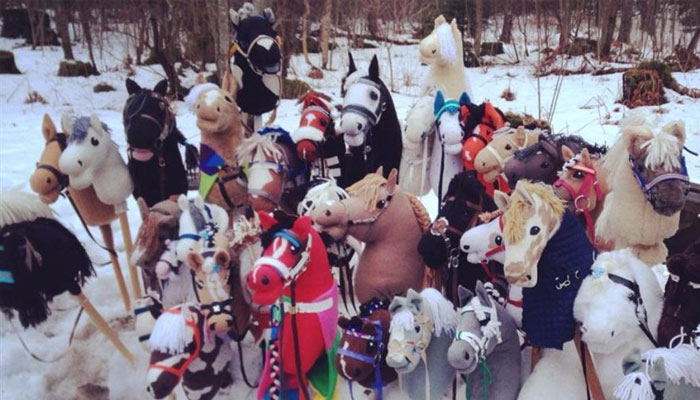 by Bill Chambers Hobbyhorsists. They are predominantly young women, tweens and teens alike, who pretend to ride broomstick horses. The horses have names, idiosyncrasies, even lifespans (in a poetic externalization of personal growth, one girl's closet seems to double as a mausoleum for hobbyhorses), and they're billed alongside their riders in dressage tournaments that are surreal spectacles of girls bunny-hopping over fences while the crowd watches on tenterhooks, the way you dread an air-show crash or a figure skater's stumble. Slowly, though, the neophyte begins to decipher the nuances; at one point Aisku, the movie's sometimes-petulant lead, chides a beginner for moving her arms too much, and damn if this little note doesn't improve the youngster's game considerably. Hobby-horsing is a strange subculture but no stranger than bronies--and undoubtedly more athletic. The only reason to hate on it is if you're a misogynistic piece of crap. Finland's Hobbyhorse Revolution isn't the phenomenon's origin story, although it does find a common thread among the hobbyhorsists it interviews: they've all been bullied. (There's a particularly chilling ellipsis in cherubic Elsa's story: "There was this one boy... He didn't like that I was cheerful all the time. So he put an end to it.") Although being a hobbyhorsist sometimes exacerbated the abuse, the therapeutic value of the pastime and its egalitarian social scene appear to have made quitting unthinkable. Maybe it's the Scandinavian setting, but throughout Hobbyhorse Revolution I kept flashing back to Lukas Moodysson's extraordinary ode to seventh-grade riot grrls We Are the Best!: They are so many Tina Belchers, and yet there is something quite punk about our hobbyhorsists, who saw where the proverbial goalposts were and moved them for themselves. They're also hilariously profane. I love these dorks, enough to overlook that the movie's own brio never quite rises to their level.