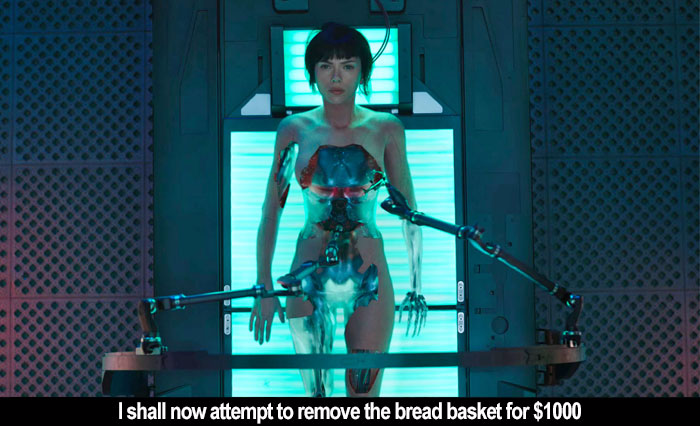 by Walter Chaw Emily Yoshida, in an article for THE VERGE addressing the outcry over the casting of Scarlett Johansson in Ghost in the Shell, has the last word on the topic as it pertains to anime in general and Mamoru Oshii's seminal original in particular (an adaptation of a popular manga to which most casual fans in the West won't have been exposed). She provides a stunning, succinct historical context for Japanese self-denial and the country's post-bellum relationship with technology, then writes a review of this film in which she systematically destroys it for its essential misunderstanding of the source material. I agree with every word. I learned a lot. And I still like the new film, anyway. I think Ghost in the Shell is probably fascinating in spite of itself and because the environment has made it dangerous for pretty much anyone to discuss what its critics (not Yoshida, per se) wish it did. I like it because its production design is beautiful and I like it even though it's basically a RoboCop port that takes the American attitude of being horrified by technology rather than the Japanese one of being largely defined by it. It's puritanical. It was interpreted, after all, by a country founded by Pilgrims. Ghost in the Shell often doesn't know what to do with the images it's appropriating, and when push comes to shove, the dialogue falls somewhere between noodling and empty exposition. Still, there's something worth excavating here.

Major (Johansson) is a robot with a human brain programmed for wet-work in an anti-terrorism task force led by Aramaki ('Beat' Takeshi Kitano). When she follows the trail of dead industrialists and scientists to a figure called Kuze (Michael Pitt), she discovers some truths about her human identity. The first complication is that she's told she was a war refugee--surname Killian--whose family has been killed by "terrorists." This pushes a few buttons in 2017 America and places Ghost in the Shell in good company. Later, it's revealed that Major's brain actually belonged to a Japanese girl; Kuze's belonged to a Japanese boy. When they confront each other with this news in the middle of a stunning future-Japan, there's an astonishing dissonance. There are hardly better representations of Caucasian beauty than Pitt and Johansson. Revealing that both are constructs of "perfection" in this Asian context, the suitable vessels for Asian brains, speaks devastatingly to a long history of Japan's own racial and cultural self-abnegation. (It would be interesting to consider this picture as the "B" half on a bill with Scorsese's Silence.) As an ABC growing up in the '70s, I've spent about half of my life wishing I were Luke Skywalker. Positive Asian representation in Western pop culture is a relatively new thing and exceedingly rare. Reason in part for the outcry over the appropriation of this fundamentally Asian property with a white person as the lead.

But something troubles me about this new strain of "wokeness" in our culture. The one where Rogue One is fine and all for introducing Asian faces (and Mexican, and Pakastani) into the Star Wars mythology for the first non-Neimoidian-minstrelsy time, but where are the women of colour? The one where allies everywhere who defended Cloud Atlas are now coming down hard on Doctor Strange and The Great Wall without much knowledge or personal experience with the uniquely American issues of "whitewashing" and that great misused and ever-in-vogue term, "Orientalism." I think Get Out is brilliant mainly for exposing what happens when good-white-people intentions get wrapped up in vaguely-informed zealotry. I would offer as well that this film shares a premise with Get Out, though obviously it's less pedantic about it. Given my druthers as a kid, I would have gladly had my brain transplanted into a white body. Ghost in the Shell is complicated even more by the spate of strong Asian voices writing impassioned critiques of how the movie misses the point of the manga...and the previous films (and the television series), which on the one hand is valid--the film really doesn't understand its sources--but on the other verges on a kind of fanboy myopathy. There is a sense of inevitability about the "bad adaptation" line of criticism. The best reviews of this film in that vein were written before it was released.

I love Oshii's Ghost in the Shell. I love its sequel, subtitled Innocence, more. It was one of my favourite films of that year and the most interesting take on the topic of machine identity since Blade Runner--which was, of course, itself the key visual touchpoint for this property. Its genealogy is complicated, right? There's an extraordinary amount of cultural osmosis between the U.S. and Japan. It seems silly to ascribe a definitive cultural specificity to a piece as overtly elastic as this. Its genesis is a commentary on diffusion. This Ghost in the Shell is that tune translated from English to Japanese back to English again. Making it a story about a young woman discovering strength in herself is every Disney Princess's progression. It's the most familiar skeleton on which to hang this foreign flesh, The casting of Johansson wasn't the only concession the filmmakers allowed to get the movie made, to its detriment. I am stunned by this line from Yoshida's essay: "Maybe I don't imagine anyone as Motoko other than myself; maybe I'm not alone in that feeling," because it crystallizes, savagely, emotionally, the essential issue of representation in Western culture for someone like me who is more culturally American than almost any of my white friends, but who sees almost no representation of anyone who looks like me in any of the stuff on which I subsist and rely in large part for my formative identity. I always wanted cinema to make me feel better about the pain of "otherness" I experienced as a child--and still do now and again, when criticism of my criticism leads people to call me "chinky" and infer that my opinions are guided by anything other than an upbringing in rural Colorado where I thought I was white whenever, and for as long as, I could. Film can't do that, alas. I know because I've asked it to.

So consider the moment again where Major and Kuze talk about who they were. Consider Johansson's stunning performance, how she walks differently, how she's chosen to take another role that is inherently about the denial of the physical. She's a lot like Warren Beatty in her desire to comment on her attractiveness with the parts she plays (Her, Under the Skin, Lucy). She transcends her appearance in them. She loses the thing she's known for, more or less, or she's punished for it. The greatest impediment to her existential evolution is her appearance. Sometimes, looking like she does is literally fatal for her characters. She is the most interesting actress working in the United States, and the great irony of that is she's still seen as a starlet banking on her looks. Her Major is a fascinating cipher. There's a moment where she crosses the same street she crossed in another life in Lost in Translation, and the film takes on even greater meta-textual weight. Rhyme it with dozens of reflections, camera-image holograms, and other ghosts that provide her no recognizable selves, spurring her to hire a mixed-race hooker (Adwoa Aboah) so she can have someone examine her face obsessively for signs of herself. There's a sequence in a strip-club where she gets chained to a pole by a couple of sweaty guys and hit with a cattle prod in preparation for a gang rape. She says that she doesn't dance. She doesn't.

Johansson is constantly threatened with sexual violence in her films. There's a motif running through them where she gives "consent" for the erasure and modification of her body but at the end is told by her guardian that her "consent" was never required. That's powerful. A woman's consent is the defining characteristic of the extent to which a society has succumbed to patriarchy. Major believes there is such a thing for a woman and her body. She is cruelly disabused of that notion. It's almost as powerful as the suggestion that what Japanese people have expressed in their popular art is the desire to be literally appropriated by their military conquerors. Almost as powerful as the suggestion that in teaching the bots only to speak in English (although they appear to understand Japanese with native fluency (and can learn any language in seconds)), the terrorists they've been created to fight are, you know, likely American.

There are a lot of comparisons to be made between Ghost in the Shell and other, more successful, more familiar sci-fi properties in the West, and that's the failure of courage here. What remains after all the clearing-away of direct philosophy and condensing of days' worth of material is yet this essential removal of humanity that indicates a lot of cyberpunk anime and especially informs Ghost in the Shell. It can be interpreted as what Yoshida refers to as a "racial mystery zone," and it speaks, too, to the complicated relationship the Japanese have with technology, which once visited war atrocities upon them and now defines them as an economic world power. I'd rather interpret it as an actor carefully choosing roles that feed her thesis that who she is at heart is overshadowed by how she looks. It's a rare auteur piece in which the author is its star. Not for nothing, there's also a classic Beat Takeshi sequence that should be cause for major celebration. It's not a small thing to have cast Beat as the most powerful agent in this universe. Nor is it nothing that he only speaks Japanese throughout. And at the end, there's a scene where Major fights the iconic Spider Tank vehicle that is distinctly and distinctively beautiful. The film's spiritual analogue for me is Tim Burton's Batman Returns, the one that gets described by nerds as a terrible Batman movie. It is. It's a terrible Batman movie--but it's a great Tim Burton movie, maybe the best one. It's about loneliness and identity. Ghost in the Shell is a terrible Ghost in the Shell movie. But it's a great Scarlett Johansson movie. It is, in other words, worth a conversation along those lines once the other issues finally get exhausted.