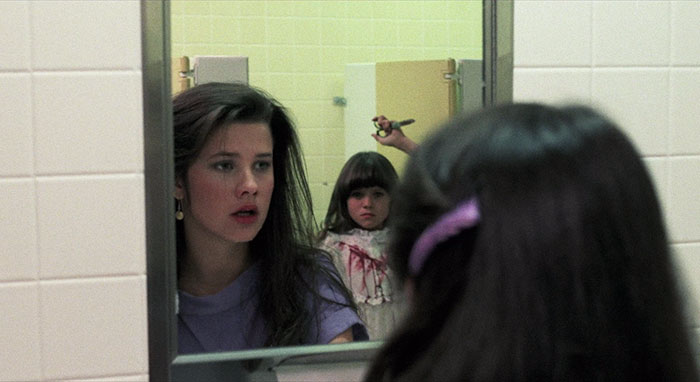 by Bryant Frazer Turning up at the tail-end of the late-1970s/early-1980s slasher boom, The Initiation is another one made with little ambition by people with no special inclination towards horror, but at least it doesn't look down on the genre: Despite the sorority-house trappings, it aspires to a perfectly middlebrow level of quality, like a network movie-of-the-week or mass-market paperback original. That's some kind of achievement for a film that opens with a delightfully ridiculous dream sequence (or is it?) depicting an episode of coitus interruptus involving a little girl with a knife and an intruder who catches on fire, and ends with a half-dozen college kids being tracked down by a serial killer with knives and a harpoon gun. Trouble is, The Initiation works a little too hard to lay a foundation for its killing spree in a drama of dark family secrets. The result is a messy amalgam that doesn't work especially well as a soap opera or a teen sex comedy, let alone as a slasher movie.

A young Daphne Zuniga stars as Kelly Fairchild, an amnesiac sorority pledge haunted by recurring nightmares. Appearing in just a few scenes, top-billed Vera Miles and Clu Gulager play her parents. As the story begins, Kelly is one of just four pledges still standing during an apparently rigorous hazing process for Delta Rho Chi. For some reason, pledge trainer Megan (Frances Peterson) has decided their final prank will involve after-hours shenanigans in a multi-level wholesale market owned by Kelly's father, where she intends to have some college boys put a fright into the girls. Meanwhile, Kelly meets Peter Adams (James Read), a grad student who wants to hook her up to a host of machines that may help decode her dreams. Then there's some business about a revolt and escape at a local sanatorium, complete with a cut-rate Nurse Ratched and offensive mental-health stereotypes who could only originate in a 1980s horror flick, that seems to have dropped in from a different movie altogether. Only when the killer is revealed in the final minutes are those disparate threads yanked back together as the film roars, all too briefly, to demented life.

The results are disjointed, to say the least, with those side narratives drawing attention to the central whodunit construction--inherited from Italian gialli--that had become a feature of many American slashers. And the direction is largely uninspired. Peter Crane was fired for falling behind schedule and replaced by fellow TV helmer Larry Stewart, who pursued expedience rather than atmosphere. The finished product is redolent of telefilm efficiency, though Stewart does slow down occasionally in search of a joke, like Alison (soap-star-in-training Hunter Tylo, billed here as Deborah Morehart) acting in a two-shot with a shop mannequin as her scene partner, or a walk-and-talk with Marcia (Marilyn Kagan) and Ralph (Trey Stroud), the latter dressed as a penis. Some effort is made to generate atmosphere among the fairly ordinary product showcases inside the Fairchild Building, and it has to be difficult to make scores of lampshades seem even mildly creepy. The more effective images include brief glimpses of the killer in shadows and reflections, and especially Czech DP Jiří Tirl's (credited as George Tirl) gauzy visual treatment of Kelly's nightmare, where light cast on the little girl's face by the burning man is reflected with a florid intensity that recalls Mario Bava movies.

Adding to the doldrums is the blandly derivative nature of the death scenes, which spill pints of blood but are otherwise rote stabby-slashy stuff in the Friday the 13th vein. Nor does The Initiation make much of an appeal to the libido, with some early attempts at titillation falling flat in context. For example, the camera turns up in the shower with Tylo early on, tilting slowly up her body for an undeniably gratuitous full-frontal shot meant to satisfy the Jergens crowd; later on, screenwriter Charles Pratt, Jr. stops the whole show dead as a character describes being raped as a pre-teenager. Neither scene is particularly high-minded, but each feels a little more exploitative for appearing in a film that also features the other. That said, the picture studiously avoids blatant misogyny, positing a killer whose motivations are somewhat fresher than the slasher norm and delivering an equal-opportunity body count. It's interesting in the context of the slasher cycle, but even at its best, The Initiation is fairly risible. You can admire its dedication to melodrama and get a kick out of its various histrionics--like that final, overly dramatic freeze-frame, accompanied by a weird theme song with jazzbo chord progression descending underneath synth drums and honking saxophone--without coming close to finding it scary. 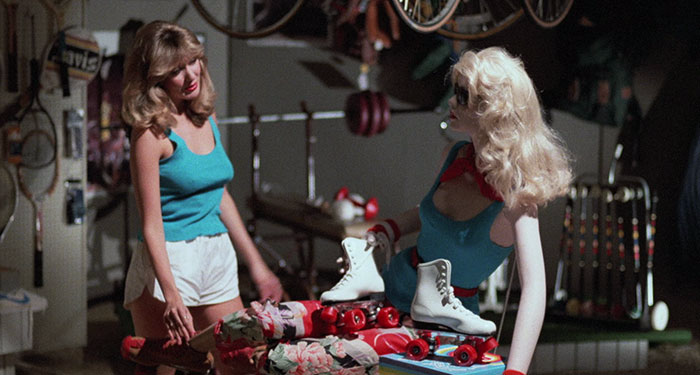 THE BLU-RAY DISC
Arrow Video pledges The Initiation to Blu-ray with a new transfer from unspecified "original film elements." The source suggests a low-generation intermediate element fairly close to the camera negative, as opposed to a release print. The HD presentation (letterboxed at a shade under 1.85:1) is attractive, with solid blacks, saturated colours, and impressive amounts of shadow detail--basically, the look for which Arrow has become known. A few shots have a dupey, more contrasty look that only draws attention to the clarity of the feature as a whole. If anything, the image could be sharper still with noise reduction dialled back a notch, but Arrow is typically astute about maintaining the organic look of a film print while scrubbing away dust and scratches. Sound quality is very good, considering the movie's budget. Though the uncompressed PCM track is monaural only, the dialogue recordings are generally clean (if uneven) and the music is nicely presented, whether it's the brittle synth-and-sax stylings of the score by L.A. session musicians Gabriel Black and Lance Ong or the party-pop beats of Texas punk band Refugee.

Extras are the genre norm, led by three new HD interview featurettes from Red Shirt Pictures. Director Larry Stewart died in 1997, and Daphne Zuniga was apparently unavailable. Instead, in "Sorority Saga" (21 mins.), screenwriter Charles Pratt, Jr.--who went on to greater financial rewards as a writer and producer on soap operas, including "Melrose Place" (which reunited him with Zuniga), "All My Children", and "The Young and the Restless"--talks about growing up in the business and reveals why he decided to become a screenwriter at USC Film School. The Initiation's producers, he says, "could care less about the genre--they were just out to make a buck." He recalls, candidly, how the level of craftsmanship behind the camera declined sharply overnight when the original director was replaced. In "Dream Job" (14 mins.), Joy Jones looks back on playing dream research assistant Heidi from behind a huge pair of glasses. She remembers that, on her first day of work, the director was replaced, and describes her decision not to pursue an acting career: "I'm really not cut out for it."

Lastly, in "Pledge Night" (19 mins.), actor Christopher Bradley remembers playing Chad, one of the male students in the film. He describes his excitement at getting the role, which he believes helped give it a certain energy, and remembers some stressful conditions on set. (Zuniga, he recalls, "was not particularly friendly to the director.") He was living in New York City when The Initiation was released, but somehow missed its grindhouse engagement and had to catch up with it on VHS. "You can't call it art," he says, "but it's so much fun." Also included is a short trailer (1:11, transferred in SD) featuring enough in the way of blood and breasts that it must have been meant for the international market or, perhaps, a video promo in U.S.. And the Arrow barrel-scrapings department contributes a 22-second deleted scene with no sound, and of no consequence whatsoever.

Providing a feature-length audio commentary are the podcasters behind a show called "The Hysteria Continues" that is apparently dedicated to slasher movies. The ringleader of the group, Justin Kerswell, has published a book on the subject, and he's done his homework. He's joined here by the semi-anonymous Eric from Dublin and Joseph and Nathan from Tennessee. As viewing partners, they're agreeable enough, expertly identifying elements that The Initiation borrowed from other movies (Halloween, Prom Night, Hell Night, The House on Sorority Row, etc.) and tracing the resumes of the producers and directors--along with the few actors who ever appeared in another film. I was starting to warm to this crew until one of them dropped this truth bomb: "In terms of shopping mall-set horror movies, I think I prefer The Initiation to Dawn of the Dead." I suppose that's the kind of attitude you want from a slasher-movie audio commenter, but it still seems egregious to me.

A surprising inclusion is the screenplay draft in its entirety, complete with dated and colour-coded revision pages, along with the film's complete 26-day production schedule. Both documents are included as PDF files tucked away in a "BD-ROM" folder of the disc that's accessible on a computer with a Blu-ray drive. (Does anybody have those anymore? Guilty.-Ed.) They offer an instructive look behind the scenes at the planning of a low-budget film shoot--and, taken together with the video interviews elsewhere on the disc, allow the curious viewer to figure out which scenes were shot by credited director Larry Stewart and which were executed by the ostensibly more artful Peter Crane. It's a fun little diversion for movie nerds, and I'd like to see more of this kind of thing. Additionally, the first pressing is said to include a "collector's booklet" with a contribution from critic James Oliver; it was not supplied for review. For more framegrabs from The Initiation visit our Tumblr. 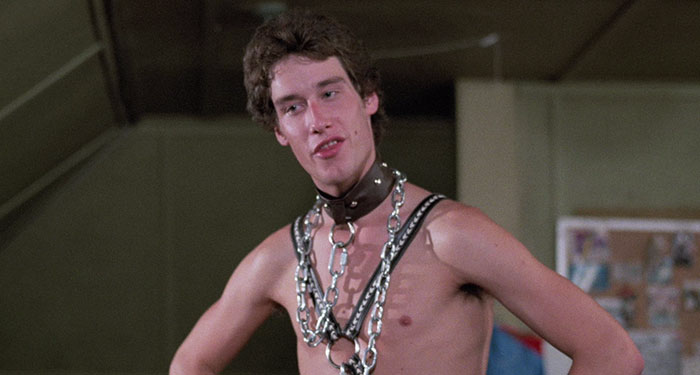